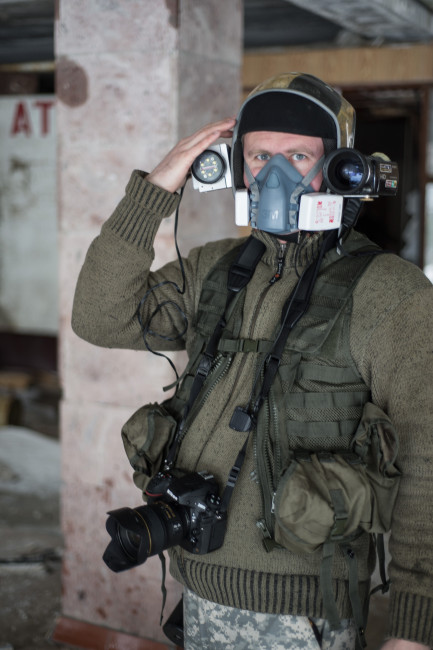 Arkadiusz Podniesiński (b. 1972) is a Polish photographer and filmmaker, a technical diver, and a graduate of Oxford Brookes University in Great Britain. He has been continuously documenting the effects of the Chernobyl nuclear disaster since 2008 and those of the Fukushima disaster since 2015. The photographer focuses on the ongoing problems associated with the radioactive contamination of the environment and the progressive disintegration of the deserted towns and buildings, as well as presenting the tragedy of the hundreds of thousands of evacuated residents — the silent victims of nuclear disaster.

Another result of Arkadiusz Podniesiński’s engagement with Chernobyl has been the creation of the two-part documentary film, Alone in the Zone (2011, 2013). Instead of dealing with the constantly explored topics of the causes, effects, and who is responsible for the disaster, he presents the current state of the closed zone and the lives of some of its inhabitants.

After several years of work in radioactive zones and with the help of hundreds of people and institutions from around the world, he published the photo album HALF-LIFE: From Chernobyl to Fukushima (2018), presenting and comparing the effects of both disasters. The album includes essays written by former Japanese Prime Minister Naoto Kan and former USSR President Mikhail Gorbachev.

In 2016, he established the nonprofit organization Pro Futurum, the aim of which is to disseminate knowledge about the consequences of nuclear disasters, as well as to exchange experiences and information between the institutions, scientists, and residents of Ukraine and Japan.

During 2005–2010, Arkadiusz Podniesiński explored the history of some of the ships that were sunk during the Second World War. His work, along with a series of intensive and deep technical dives, resulted in his two documentary films — Baltic Wrecks and Technical Dives. In 2010, he traveled around Africa, realizing his original project, which is on the frontier between artistic photography and cultural anthropology (visual and religion), entitled Lost Souls — The Hidden World of Animism. Created during a six-month journey, these photographic portraits of African tribes who profess the oldest and most primeval religion in the world have been exhibited in museums and galleries throughout Europe. Between 2011 and 2016 he returned to Africa many times to continue his project, trying to save the dwindling tribes, their beliefs, religious practices, traditions, and clothing from oblivion.

Arkadiusz Podniesiński is also the author of numerous articles and photographs that have been published in print and online media (credits include: Nature, Der Spiegel, FOCUS Historia, Daily Mail, The Telegraph, Stern, CKM, Voyage, Days Japan, and Greenpeace Magazine). He is the leading participant in, or author of, documentary films and reportage pieces (featured on: TVN, TVN24, PLANETE, ARD, TBS and RT). In addition, his photographs have been used in many international environmental protection campaigns (including Patagonia’s Vote Our Planet).