Phew, the premiere is done. All the films have been sent. Such a large amount of registered packages, and sent to the farthest reaches of the earth at that, effectively clogged the post office for several hours. They probably won’t forget me for a long time there. Now I just have to wait for your comments and reviews.

This was my debut. My first full length film. So please forgive any shortcomings. Alone 2 won’t have any :)

Preparations have already begun, pictures and the next adventure begin in the fall. But I’ve gone off topic again. Many people ask me about various technical details of production, so this text is dedicated to the behind the scenes aspects of the film. The images for the film were finished last October, and the test editing only a month before the premiere. And that was only the beginning of further, more intensive jobs. I was working 24 hours a day for the last month.

After initial editing, approx. 5% of the original material remained. The rest was archived. Some of these were unsuccessful takes, too long or those which I couldn’t show for various reasons. Then I could start work on the final edit, i.e. putting the takes and sequences in the right order, cutting them to the right length and adding various types of effects. 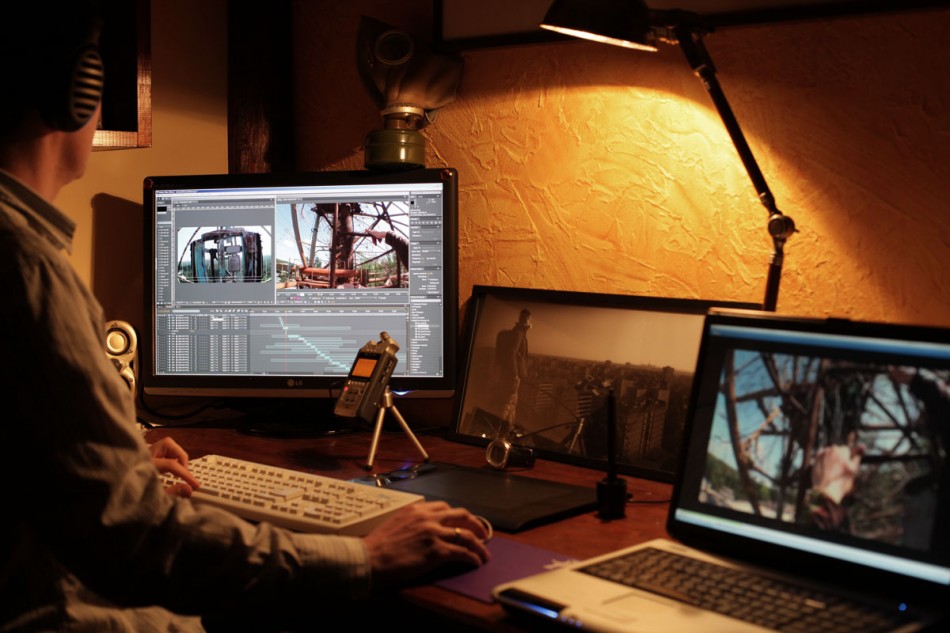 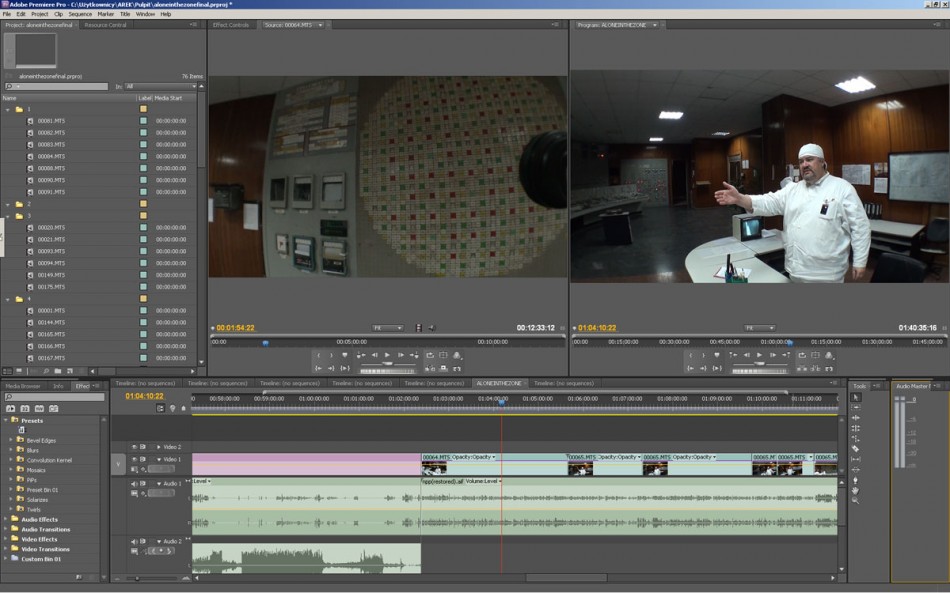 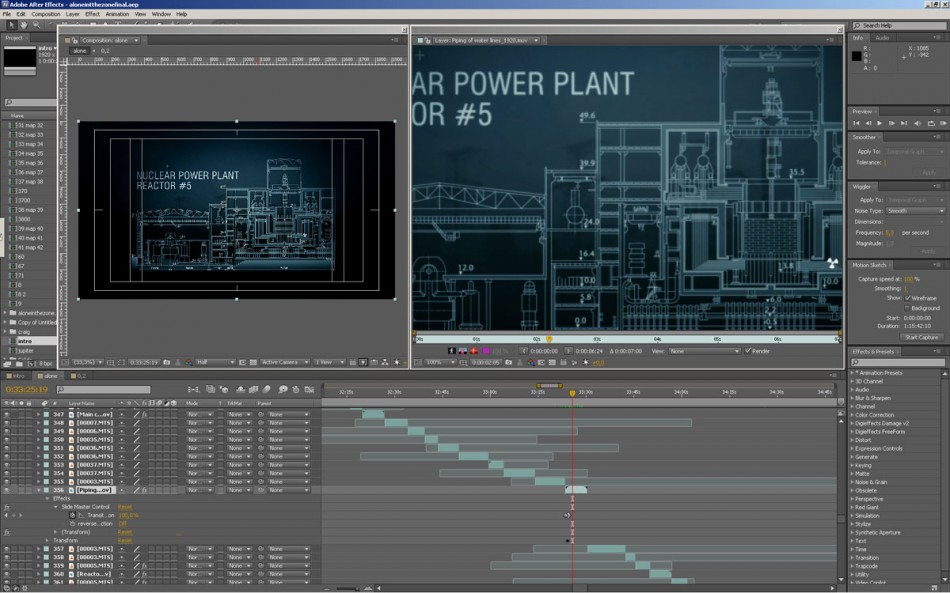 Adding effects and slight corrections in Adobe After Effects

After editing, rendering the final image of the film took about 30 hours. It was necessary to do several such tests with various arrangements of the image.

Even the best film couldn’t work without music. At the beginning I intended – as I have thus far – to buy readymade music. However, the unusualness of the whole project, and especially the full length nature of the film, led me to change my plans and find a real composer. A composer who, unlike even the biggest databases of works, would be able to carry out my vision, adapt to the method of editing the film and understand the specific atmosphere of the exclusion zone. And all without visiting the zone. A composer who patiently listens to my suggestions and as a result creates a rich, interesting musical arrangement. The sort I was used to when buying music from well known American music databases. The music in the trailer was created by X-Ray Dog, a company which has written music for many Hollywood hits. So the bar was set very high. That is why I reflected on the right person, I heard many demos, I read references and I found Jakub Czech (www.prozacstudio.com). I quickly sent a handful of the most important information about my trips to the zone and the film project. I didn’t even have to wait an hour for a response. It was instant. And positive, full of enthusiasm and energy. This boded well for the future. I didn’t have to explain much to Jakub. The type of music and method of editing were clear enough in the trailer. We understood each other without having to speak, which was particularly important when working at a distance and under the constraints of time and the inevitably approaching premiere of the film. I sent him the next parts of the film in succession, giving my most important suggestions and remarks. After receiving the initial version of the music for each part of the film, I made a few corrections or suggested changes in certain segments. I wasn’t always successful, but that’s probably proof that the composer also has something to say. And he was usually right, as you can see, or rather hear, in the film. The final effect is very good, and that is not just my opinion – it’s also the opinion of the people who are most important to us: the clients who bought the film. And for those who are curious about one of the pieces composed by Jakub – a segment of the music written for the sequence of the entrance onto the Moscow Eye (the guitar solo is the moment of climbing to the top of the antenna) PLAY – 09. The Eye. Note – good news for everyone who will buy the film: along with the additional material to the film, you will receive the full music soundtrack to the film. 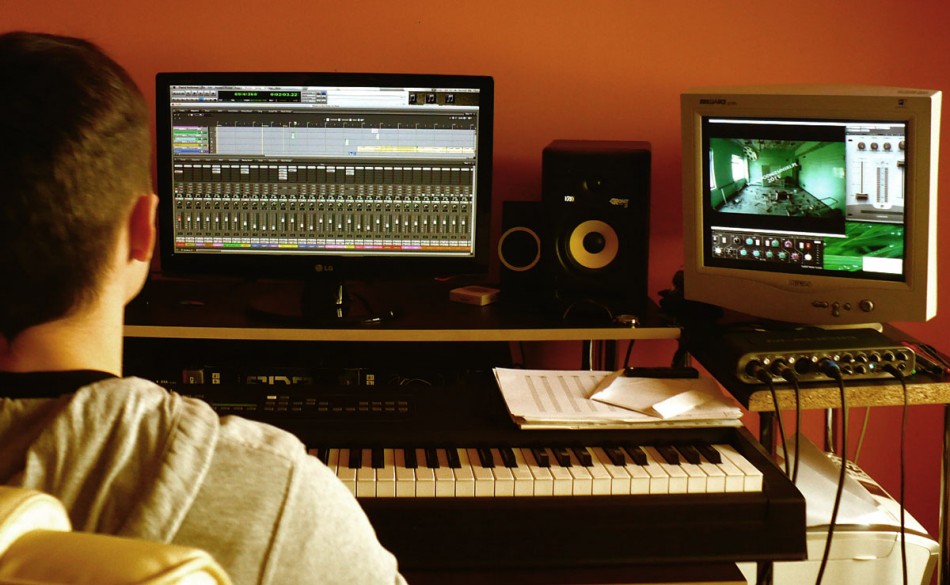 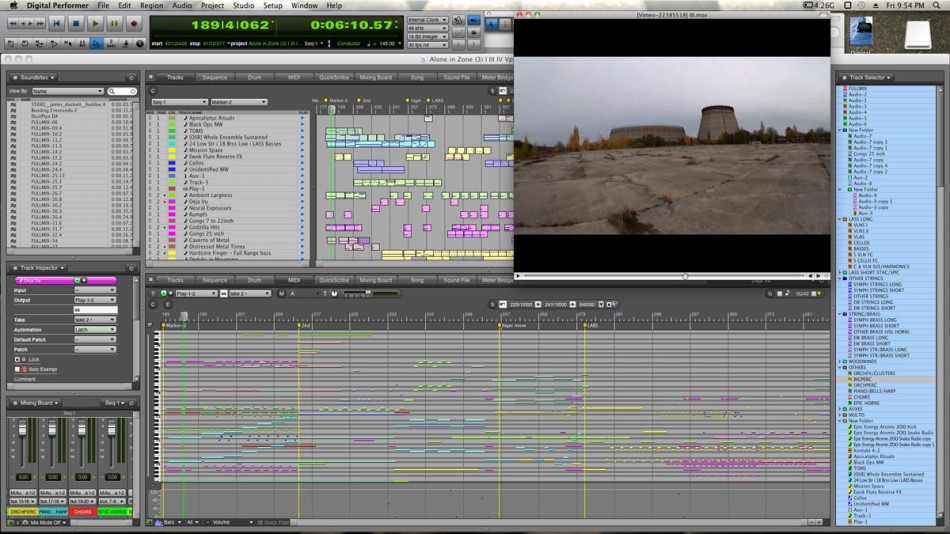 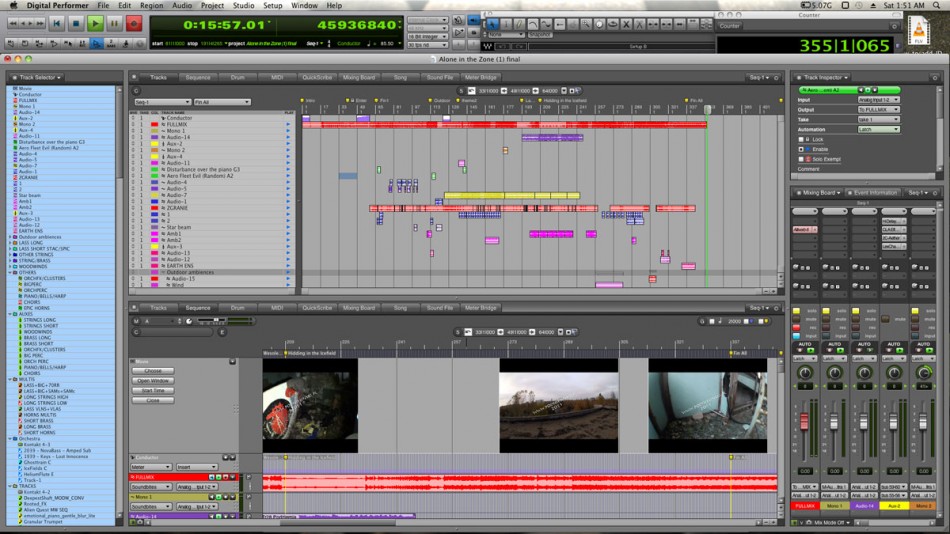 We now have the image and the music. There are just a few fireworks missing, that is, how to effectively make the finished film attractive. Here Craig from Motif Studio (motifstudios.co.za), who is responsible for the graphic framing, entered the game. Craig dealt with the intro at the beginning and the maps of the nuclear power plant. Thanks to Craig’s work, the viewer can easily locate place I am currently visiting. 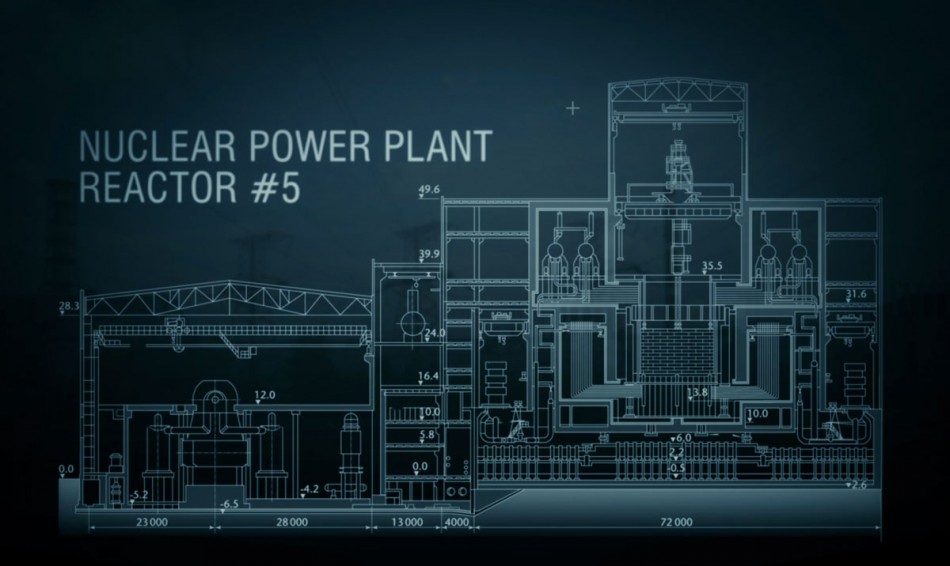 Section of the block of the nuclear power plant 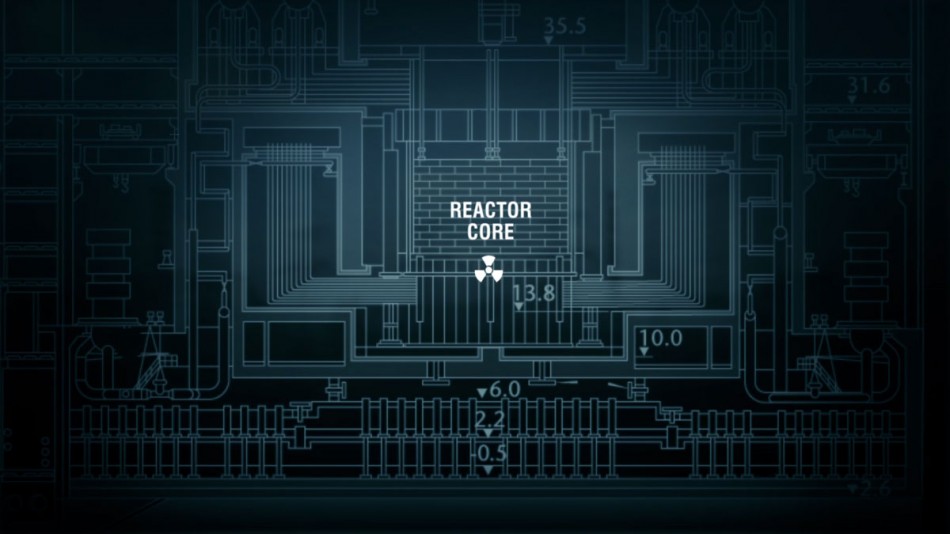 Approaching and showing the place where I currently am 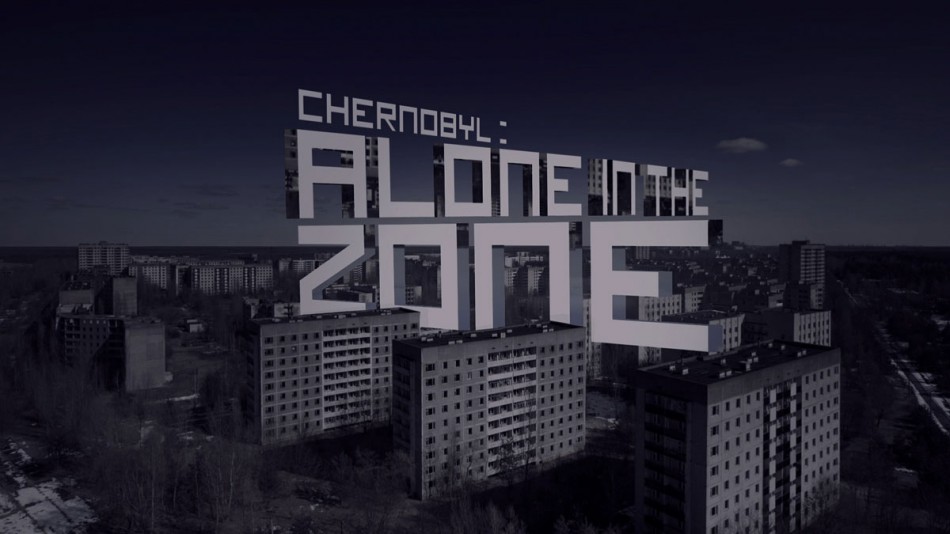 Frame from the intro

If you want to see more, I have put Craig’s demo below, in which I also noticed segments created for Alone in the Zone.

At this point we should not forget about the translators who received the original narration for the film just days before its premiere. Having had bad experiences with native-born translators who often made basic mistakes, I recognized that the foreign language versions should be done by real native speakers whose native language isn’t Polish. Maxi Bornmann was responsible for the German version and Emma Heillig for the English version.
As you can see, the whole team was international and working with everyone was a pure delight. “Alone” was not so alone at all :)

Unfortunately, not everything went so smoothly. I had to make several controversial decisions which had an impact on the ultimate shape of the film. One of these was replacing the voiceover with subtitles in the film. I recognized that it would be better to sacrifice the convenience of listening to a narration for the sake of presenting the music itself. If the narrator read the text, the music would have to be quieter. That would be too much. The music in the film played to big a role to be pushed aside into the role of simple illustrative music. Another issue was the appearance of the disc itself. The film was deliberately recorded and not pressed in order to include the individual data of each buyer on every film. This wasn’t possible on a pressed disc. However, I hope that the uniqueness and attractiveness of the film itself will compensate for this purely visual defect.

Many people ask me what equipment I used in shooting the film. This is the next dilemma I encountered. On one hand, I could use a professional Sony EX1 camera. You would have an excellent image, but I would not be able to get to the tops of the structures with it. For simple reasons. Its excessive size and weight which made it impossible to fasten to the helmet or climb to the top of antennae with it. In turn, using smaller cameras of the type GoPro or VholdR had their own significant limitations. The most important was the low image quality, especially in difficult lighting situations. After one-off tests in Chernobyl, the Vhold was shelved. It was necessary to reach a compromise and find something in between. Sony HDR-CX550 seemed to be the most reasonable solution – relatively small, but with much better and more sensitive optics than miniature cameras. Also, a wide-angle converter, the best possible for that type of camera, i.e. Century Optics Ultra Fisheye MKII. Despite everything, the kit along with battery and several additions (remote control, protection against water) weighed almost 1 kg. For comparison – Vhold weighs 120 g and the Sony EX1 up to 3 kg. But the camera isn’t everything. The equipment still had to be mounted on something. Leszek Potępa, a parachute jumper and producer of helmets for jumping, came to my assistance. This is how I became the owner of an individually designed helmet onto which I could finally attach a camera. And by the way, you will soon know what I used my helmet for :). 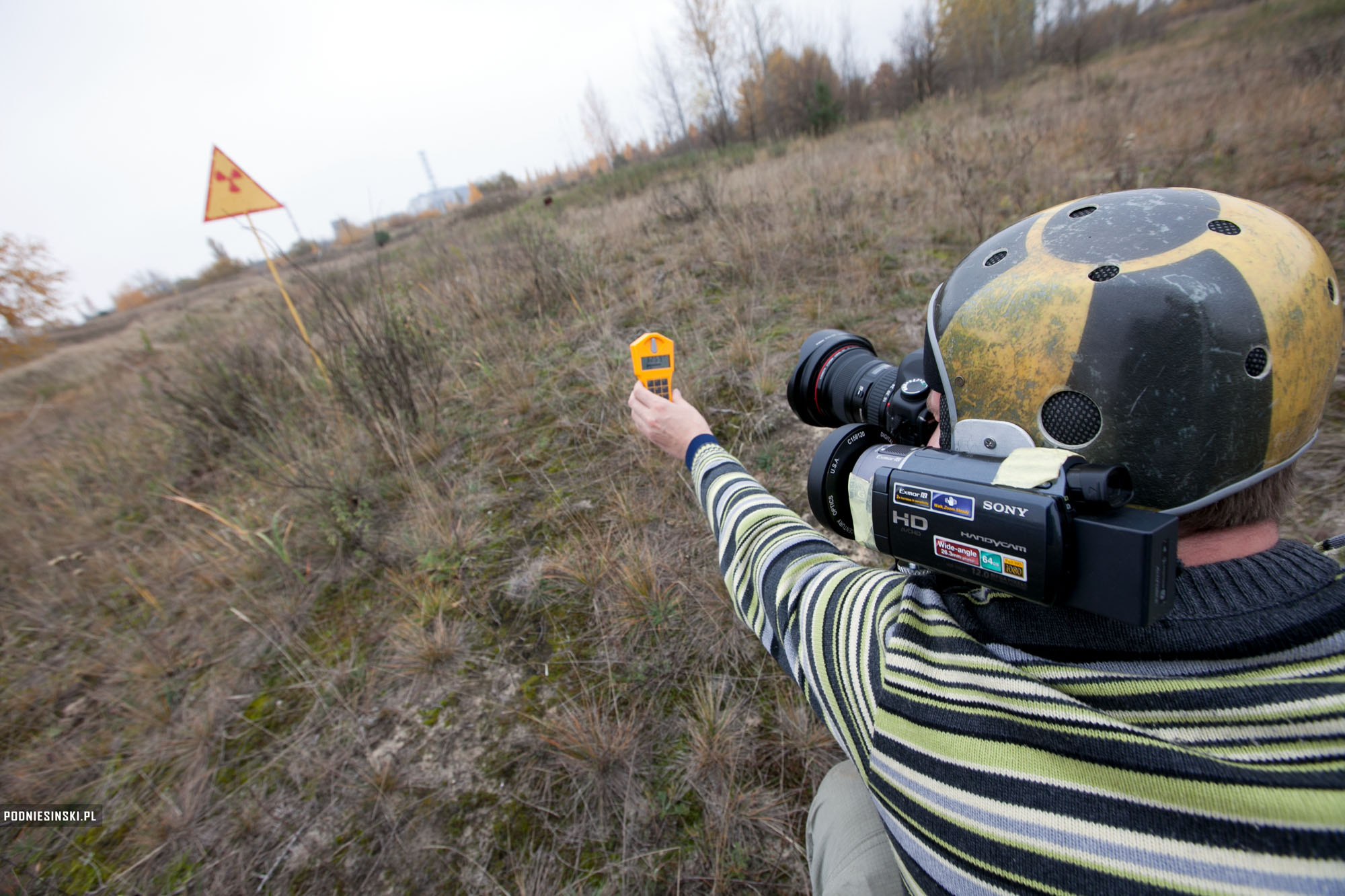 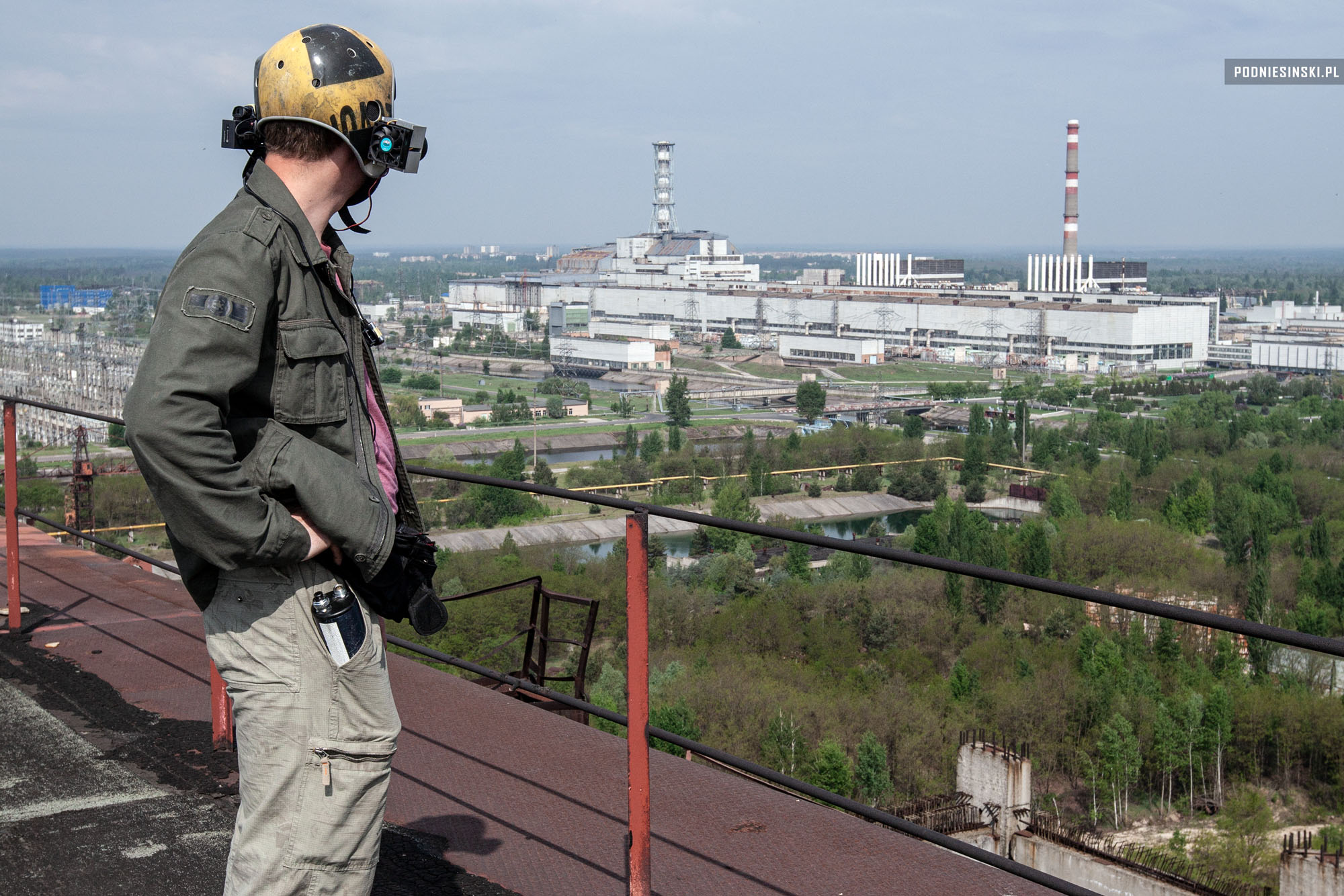 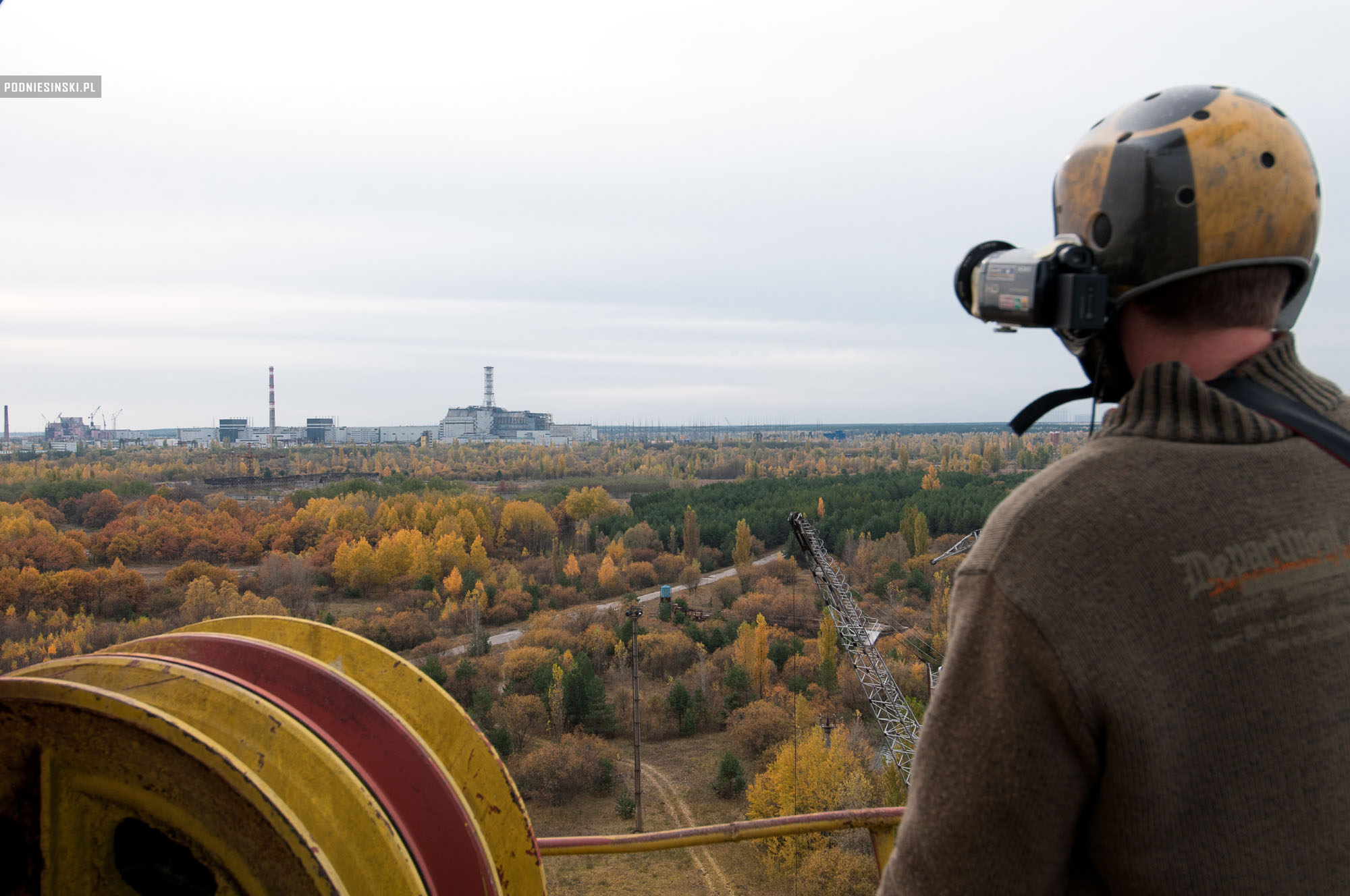 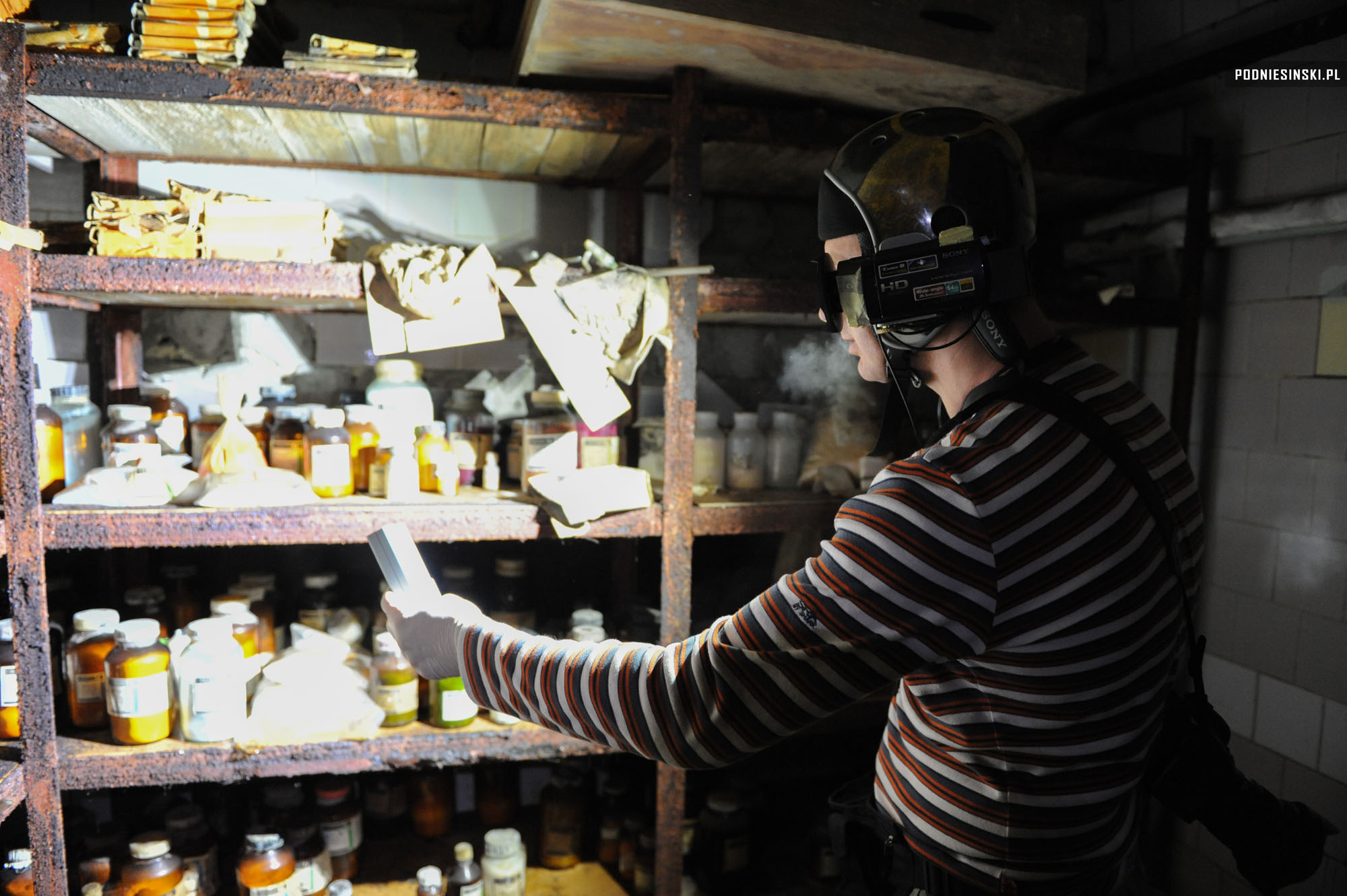 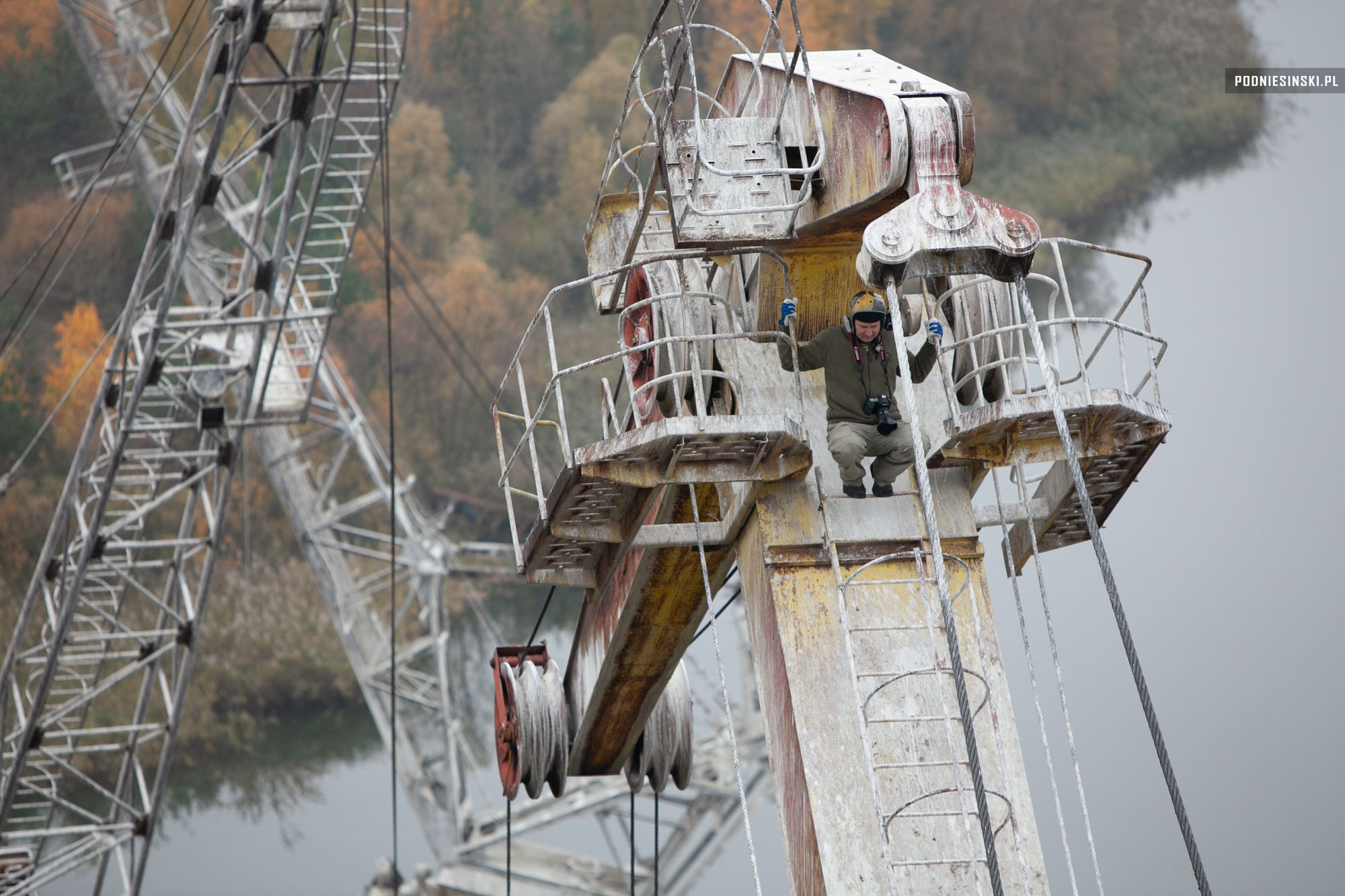 And the most important – lighting. Without this you wouldn’t see many of the interesting places, especially the cellars where it is completely dark or the huge interior of block 5 of the power plant. Here my good friend Bartek Grynda (GRALMARINE), a well known producer of underwater lighting – lighting used in extreme conditions, most often at great depths – came to my assistance. Here we were also not able to use pre-existing solutions. Higher powered lighting needs cooling, 6 high powered diodes are 48W all together. This does not pose any problem in water, above ground, however, it required construction of a suitable radiator assisted by a ventilator. And furthermore, the small power plant in my pocket, i.e. batteries of many sizes. And soon I will take on tests of new lighting, more powerful new generation diodes – they should be 3X more powerful. 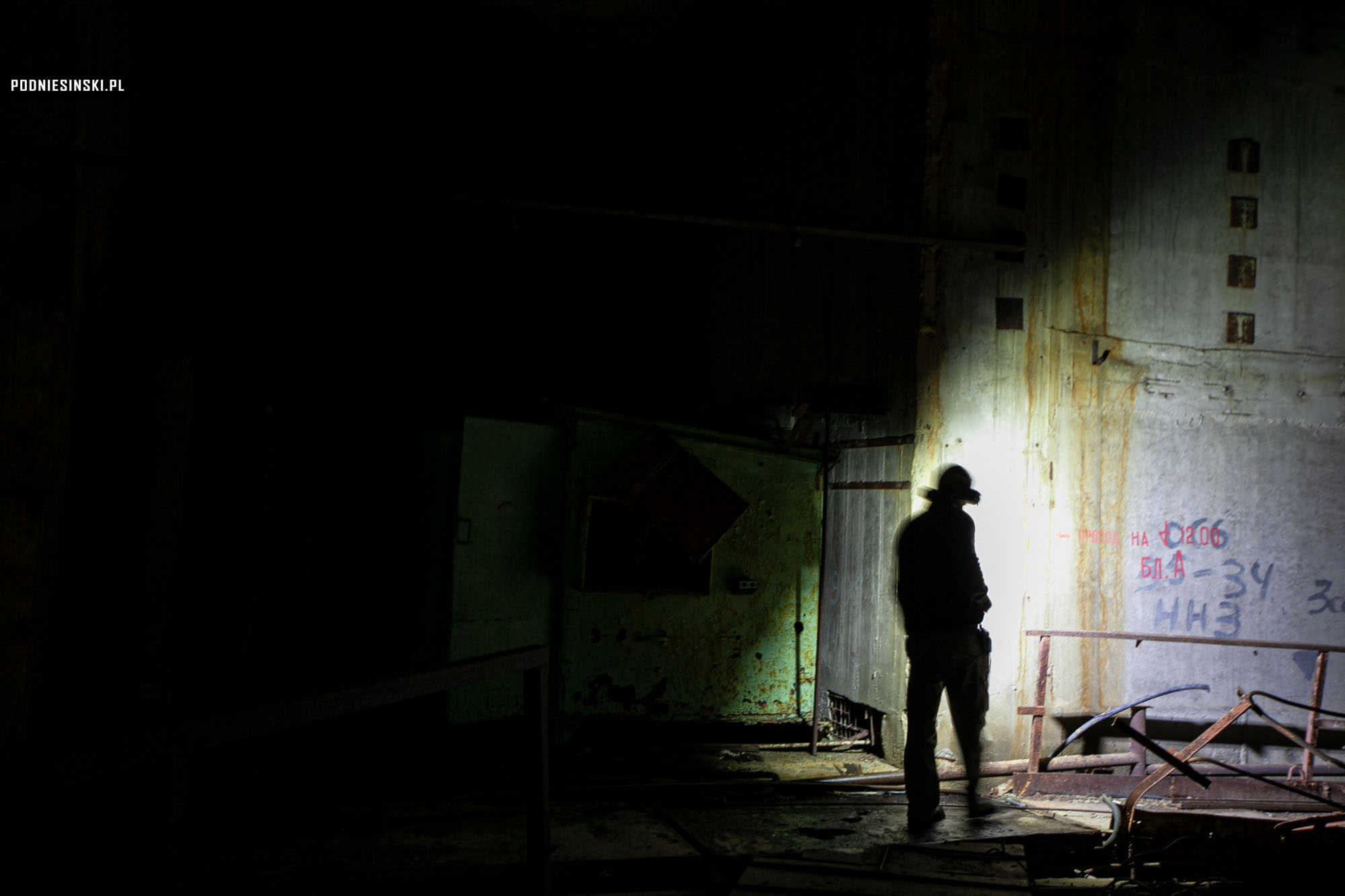 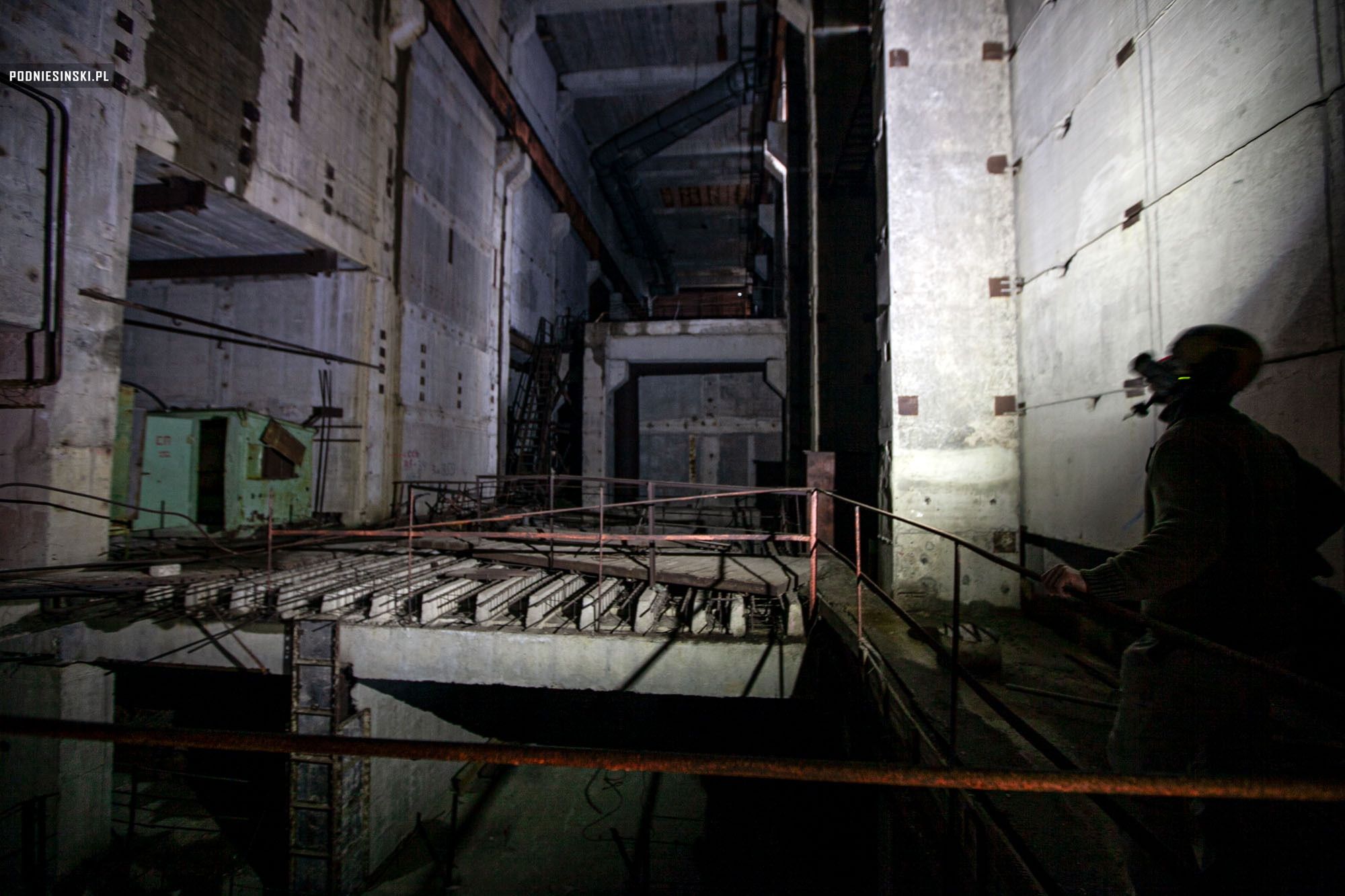 I should probably enjoy this film again with my eyes AND ears. Ears as well because the background music is really good and is an excellent “commentary” on the image (for example: the voices of children in the preschool – kind of like from a horror film or another FEAR :) On the whole the film is seemingly made to order for someone who has a post apocalyptic psyche :) In the words of a STALKER fanatic, it’s pure FPP…the camera on the helmet does its job…
-wanderer

To sum up – I don’t imagine anyone who is interested in this theme (and on this site that’s probably everyone) not seeing this film. It is really worth not buying a couple drinks in exchange for getting your own copy.
– Acik

I have the regular version on DVD and I just saw the film (tomorrow I’m watching the additional material). In a word, the film is awesome, good music and totally professionally made. Even my girlfriend was interested and watched the whole film with me, so that’s another point for the director.
-xKoweKx

The film is put together perfectly as a whole and is pleasant to watch. The camera on the helmet was an excellent idea. I totally admire both Arkadiusz’s making of the film and the journey itself into the “heart” of the zone. The soundtrack sounds great and is an ideal match for the images shown, it’s too bad it doesn’t come in mp3 format. I really didn’t expect such an excellent documentary. This film is worth buying.
– ogur22

The entrance onto the Moscow Eye was incredible! Super!
I have only one “but”. There was way, way too little. There should be more productions like this!
– Justi