And now down to business. We returned in one piece. There were no great losses. This is a report from the place we visited and the effects of our work. 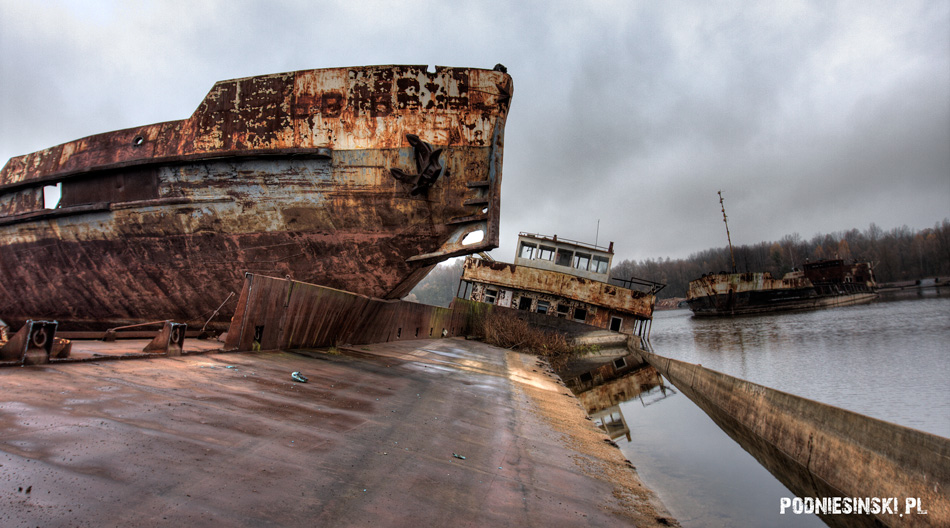 (This photo essay came into being after our last journey this month. This photo essay does not have descriptions of all the objects and places we visited, but only those which were not in the previous report and which can be found HERE.)

A vast collection of abandoned ships, completely looted of all valuable items and equipment. Only steel. Hundreds of thousands of tonnes. Just wrecks. We have permission to explore them, so we go in. We are horrified by the scene of destruction and devastation. Rusted, although in most cases the name of the unit is still legible. You can see the widely-known symbols of soviet domination – red stars, hammers, sickles… Some of the ships still proudly stand at anchor, although most of them, partially flooded, lie along the bank. Nearby, a group of people is collecting scraps and cutting the larger pieces with torches. The wrecks will not stand here forever and soon they will disappear completely.
We also visit the river port at night. It’s a perfect moment to see the ships from a completely different angle. Ghost ships…

The Land around the Nuclear Power Plant 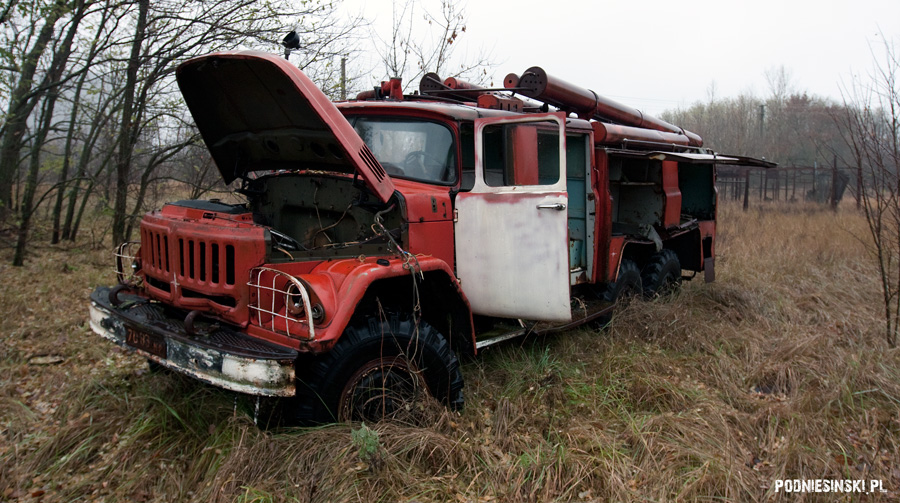 Right beside the power plant’s cooling tower there is a laboratory. In the time before the catastrophe, radiobiological experiments on fish and other animals were carried out there. There are lots of animal cages and huge baths and other containers for fish everywhere. While exploring this place, we come across an abandoned fire truck, crane and a large motorboat. A moment later, a shout from one of our friends causes us to jump – WILD BOARS!! Fortunately they were more scared of us and ran away in fright. We were also warned not to walk around alone in the Zone – lately not only wild boars, but also wolves have been seen in the town. 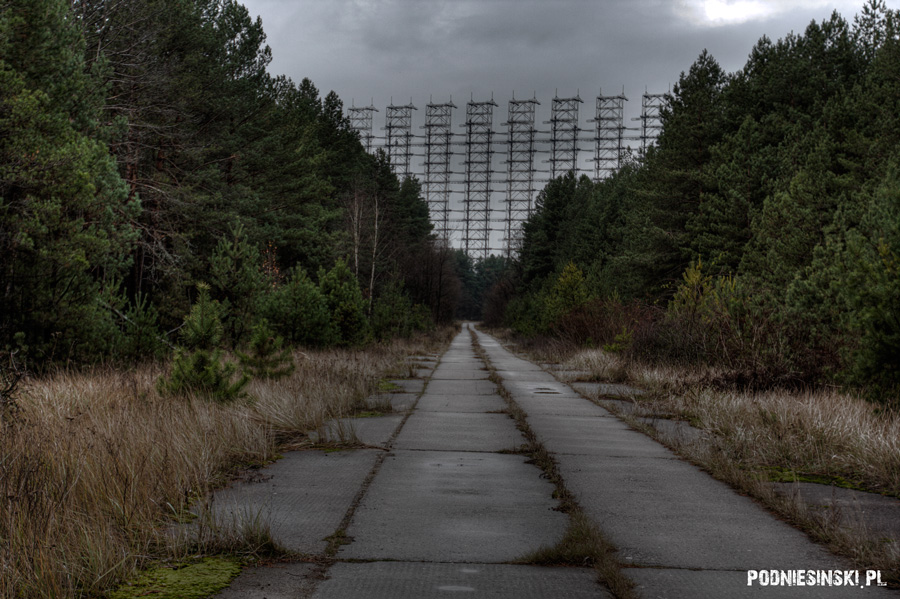 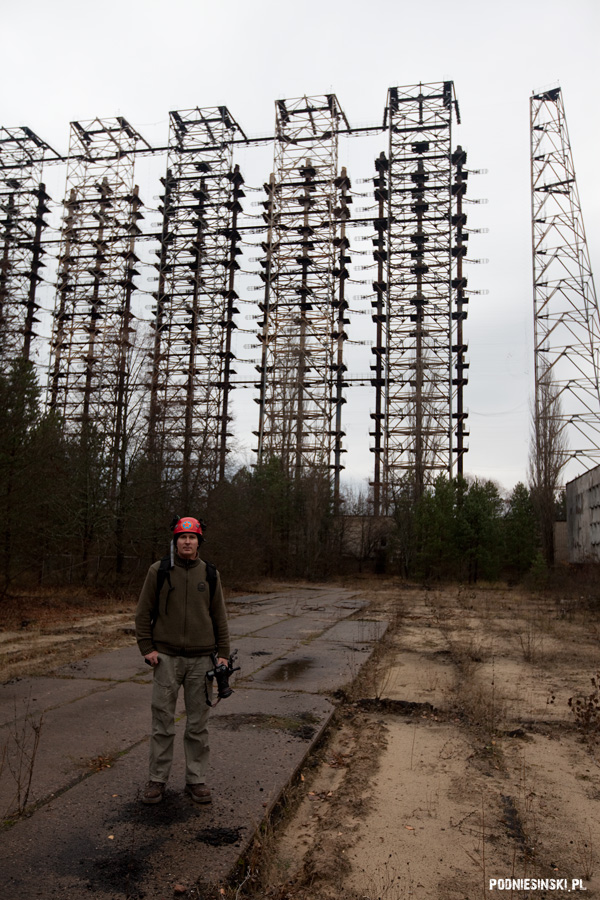 aka, Chernobyl-2, or The Moscow Eye. A secret structure hidden in the very centre of the forest. It can’t be found on any topographical map. This secret military structure served as an early detector of ballistic missiles with nuclear warheads which, during the cold war, could fly over from the United States. Approx. 1000 people stood guard over the station, the whole structure was a strict secret, highly guarded and an area of 5km around it was closed off. In 1986, as a result of the failure of the Chernobyl power plant, ionising radiation destroyed most of its electrical equipment. Despite this, the structure we are heading towards is still diligently guarded. Silence all around, broken only by loud noises of creaking metal and the whisper of wind flowing through the installation. 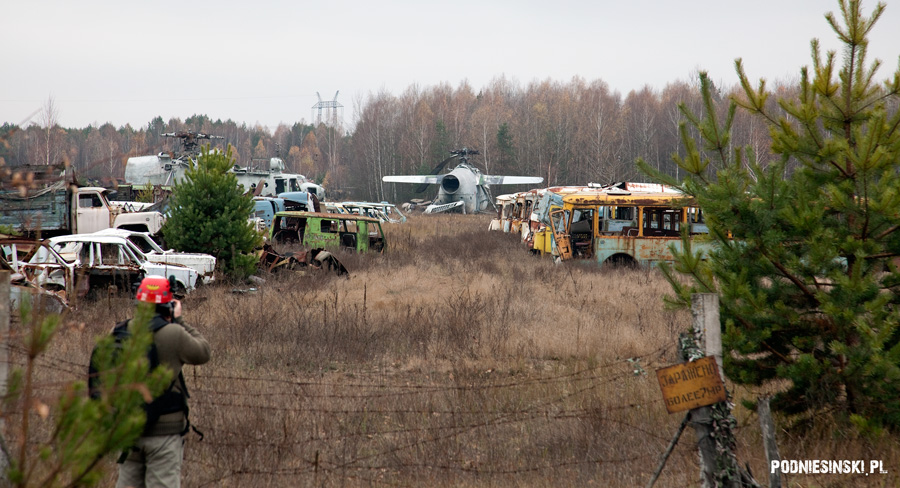 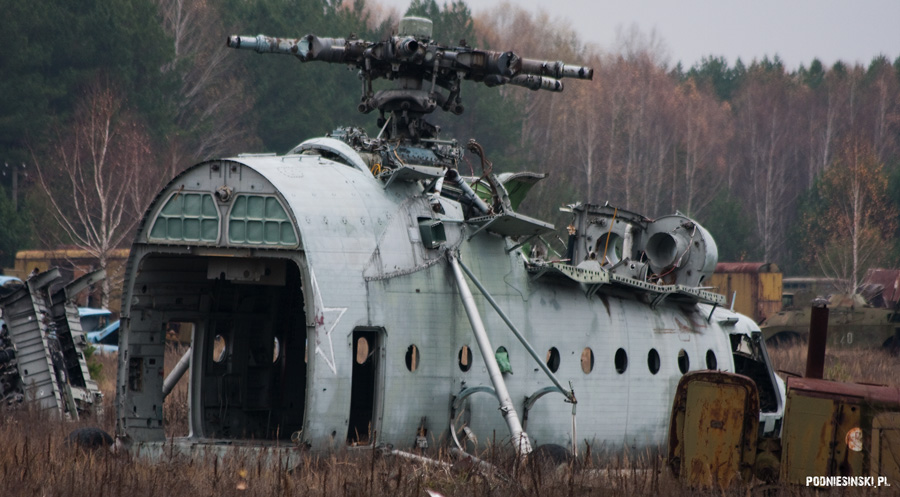 The abandoned vehicles, rather, wrecks and remains of vehicles make a huge impression on us. Over 20 years ago, they all took part in the rescue operation after the explosion of the reactor in Chernobyl. Hundreds of vehicles – fire trucks, ambulances, trucks, private cars. Military and civilian. Even the remains of huge MI-26 helicopters -the largest, heaviest and most powerful helicopter in the world can be found in this burial ground. They could transport up to 120 people or lift 20 tonnes or fit inside a truck.

Two roads lead to the cranes. We chose the one going via the Northern Radioactive Track. This place was once designated for the future expansion of Prypiat. Currently, the area is covered in cement to prevent the leaking of radioactive isotopes into the nearby river. We know that these fields are contaminated and high radiation levels persist. We agree ahead of time that if the radiation exceeds a certain level, we will retreat. Thanks to the dosimetres, we are able to monitor the radiation level as we go, which it turns out is much lower than on the water itself. Unfortunately after over half a kilometre down the road, the radiation level started to approach our agreed limit. We decide to go back – the distance to the abandoned harbour cranes is a bit too far to risk. We must be careful of the so-called pseudo-raised tolerance to radiation effect during our stay in the Zone. Many people feel that if they’ve been in the Zone (taking in an high dose of radiation) and nothing happened to them that now they can feel safe. There is no greater misconception. You don’t feel or see it, but you know it’s there. The effects of radiation can appear much later. The Cranes aren’t going anywhere – next time we will try to reach them from the other side. 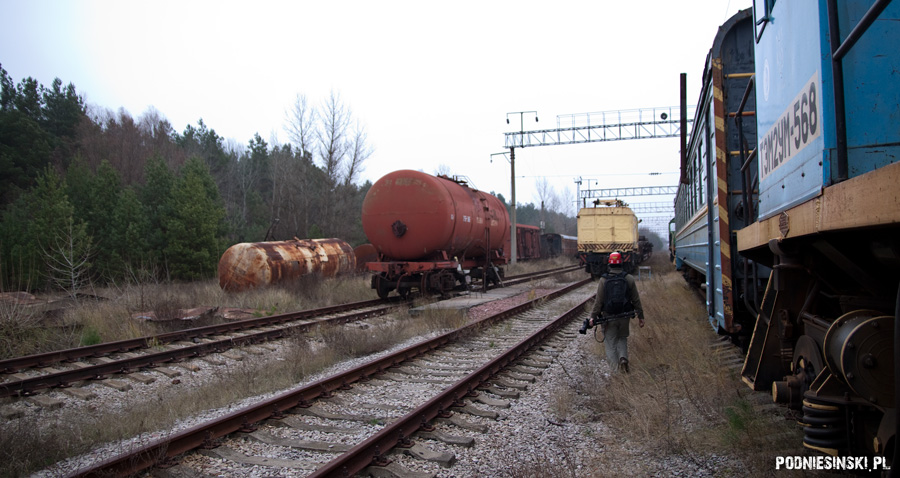 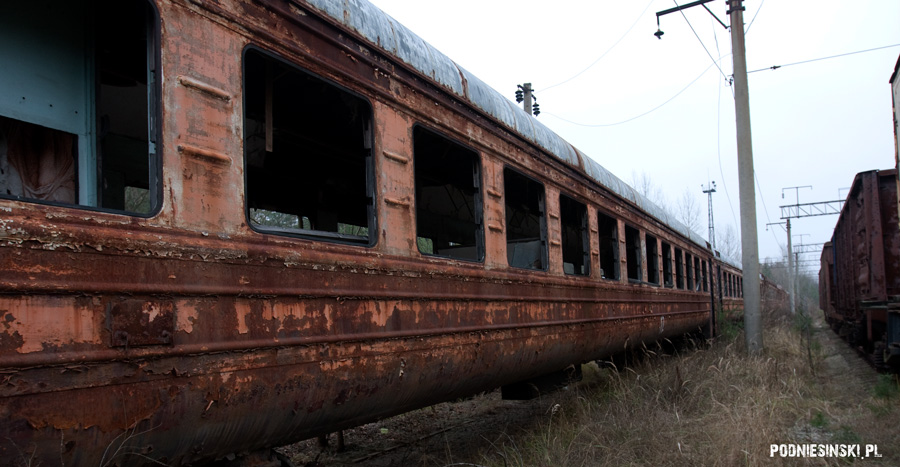 At present, access to the station is difficult because people are working nearby. However, we manage to get to the wagons and locomotives themselves. Ghost trains – abandoned, rusted relics of a bygone era.

Photography project “Prypiat before and after”.

The goal of this project is to find old pictures representing Prypiat before the catastrophe and then taking new, possibly similar, ones to compare the changes that have come about since that time. 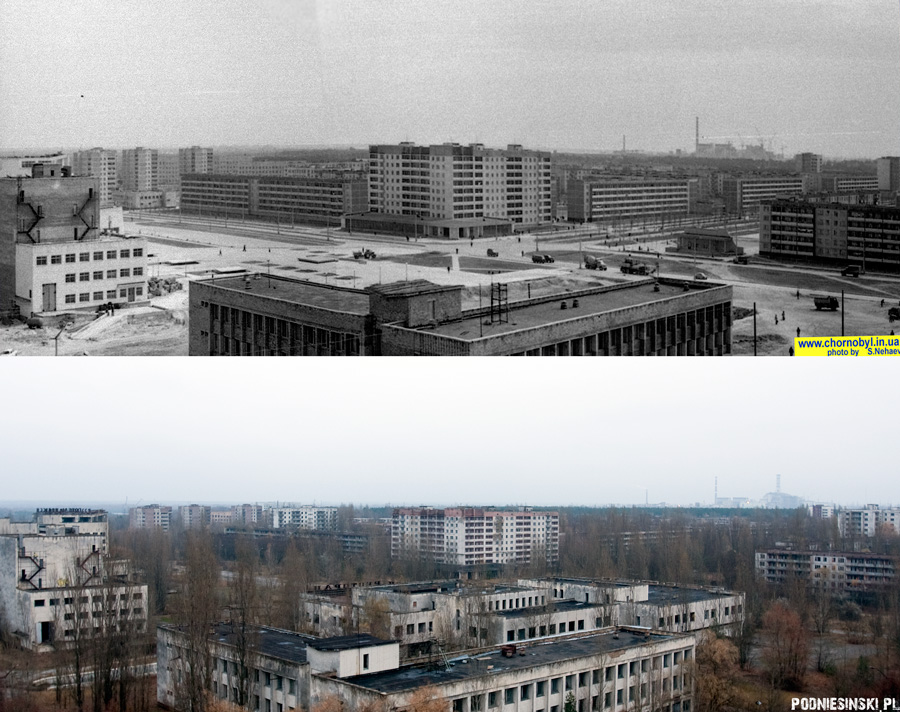 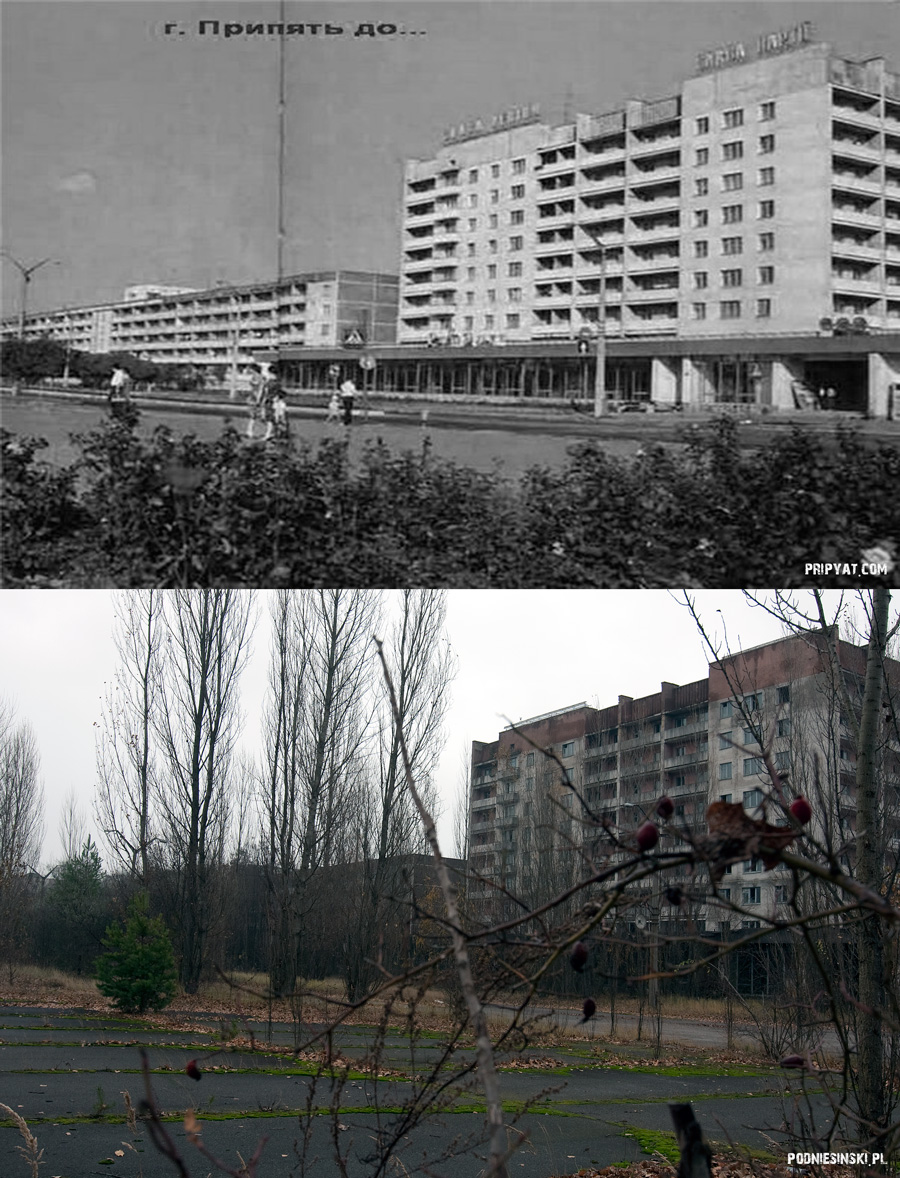 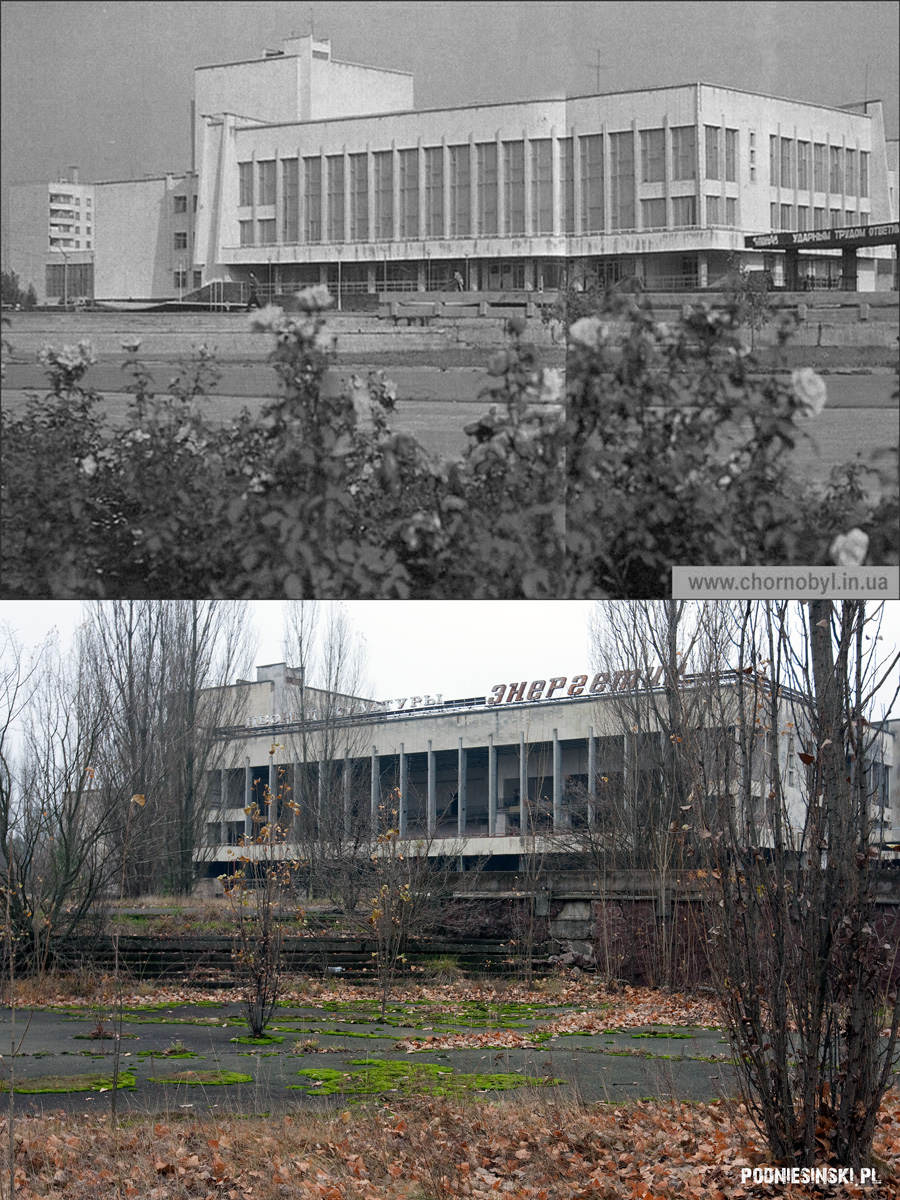 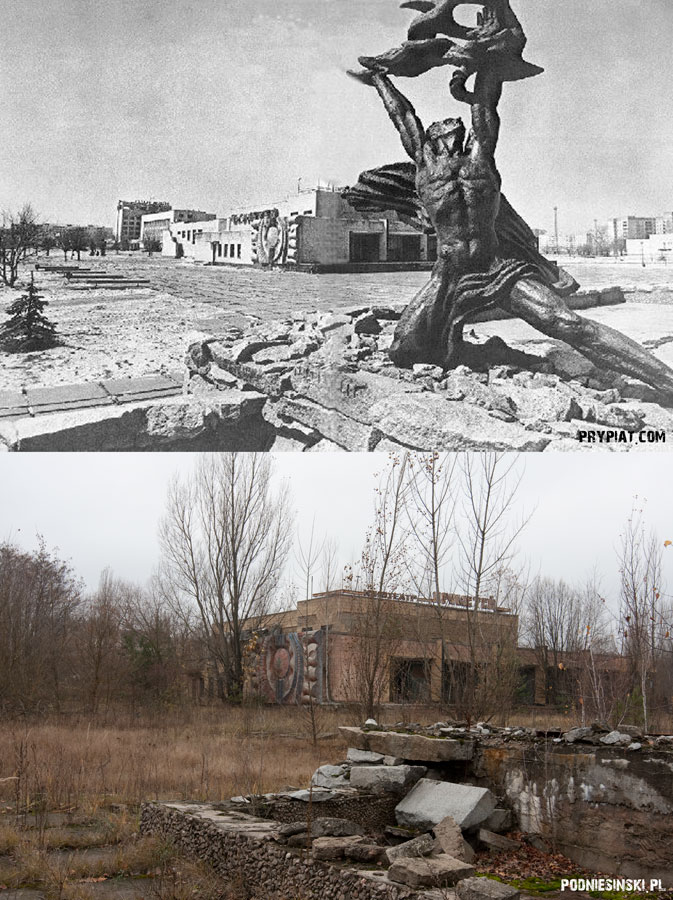 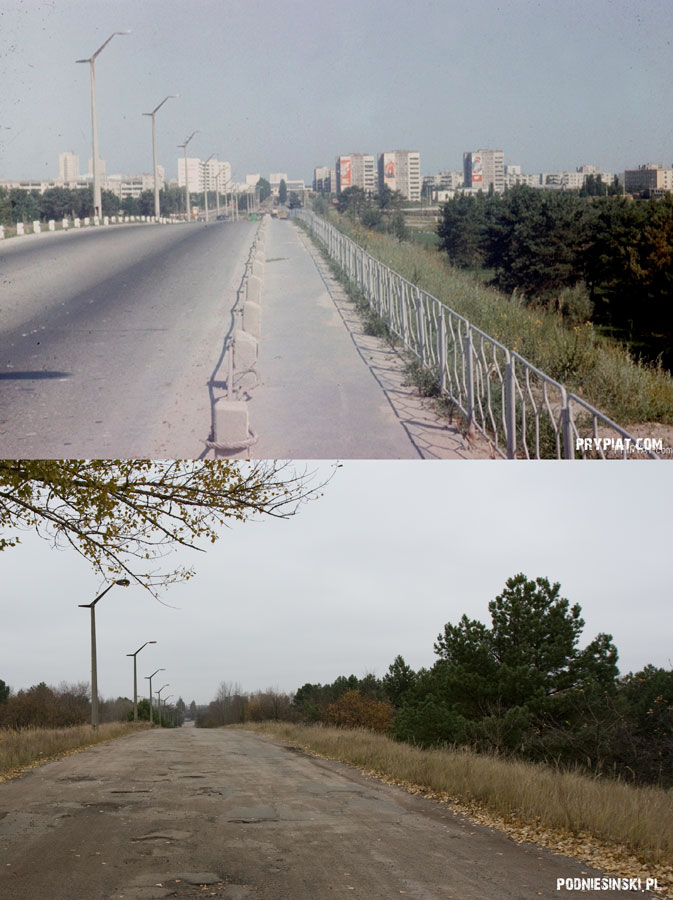 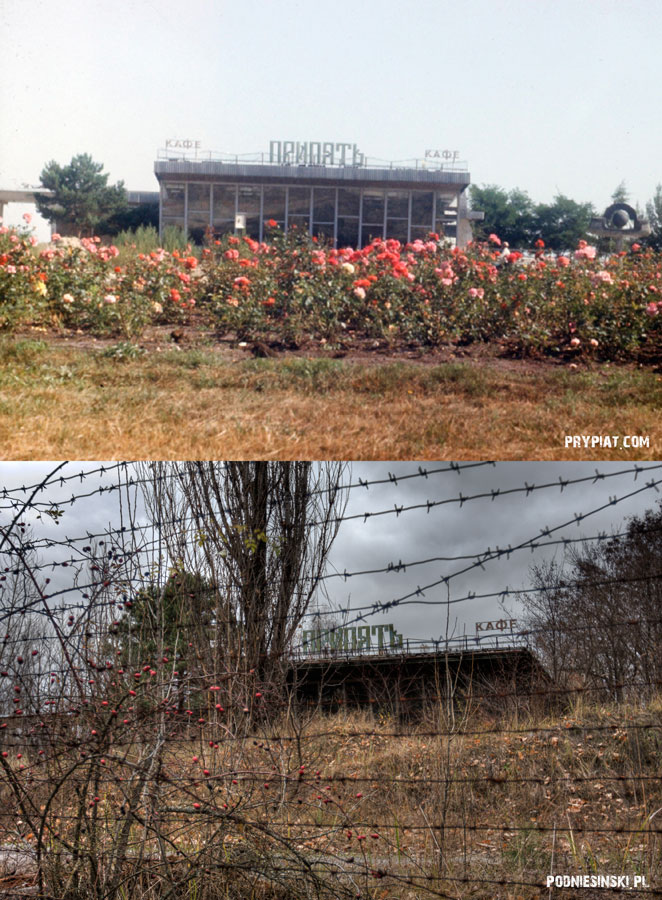 The screen tests were done with a small camera mounted on a helmet and are the introduction to a complete film which we intend to shoot with a professional camera during our next visit to the Zone.

The slide show was inspired by Igor Kostin’s book “Chernobyl. Confessions of a Reporter”.

In closing, an assessment of the journey:

Gains:
We achieved 90% of what we had planned (and the harbour cranes won’t run away).

Losses:
One person came down with flu. But he survived :)

Helicopter flight over the Zone (this time we didn’t manage for mundane reasons – because of the crisis in Ukraine, the agency didn’t have fuel), the overdue exploration of the harbour cranes, entry onto the top of the Moscow Eye and a couple things that we can’t write about…Dreams? No. We don’t dream. We make it happen!

You can see more photos from the journey CZARNOBYL 2009

P.P.S. THE NEXT TRIP TO THE EXCLUSION ZONE – details – arek (at) podniesinski (dot) pl