Until the 1960s, the Aral Sea was the fourth-largest lake in the world and one of the most important fishing ports in the former Soviet Union. It was called a sea because of its salinity and enormous size (68,000 km2, larger than the areas of Latvia or Lithuania). It was fed by the waters of the Amu Darya River from Uzbekistan and the Syr Darya River from Kazakhstan. The Soviet authorities, however, decided that the waters of both of these rivers would be used to irrigate dry, semi-arid areas of the Kazakh and Uzbek Soviet Socialist Republics for large-scale cotton cultivation. In fact, since then, the dry, barren soil began to yield huge crops and profits, making the region a cotton producing powerhouse. Uzbekistan remains the largest exporter of cotton in the world. It came, however, at a high price. The diversion of the rivers and the poorly constructed irrigation channels caused the sea to shrink. Over time, its rich aquatic flora and fauna have disappeared altogether, and with them fishing and fish processing as well as the towns that depended on these industries. Currently, the splendor of the Aral Sea is only a memory. So too is Vozrozhdeniya Island (Rebirth Island), lying in its center, and the closed town of Aralsk-7, where a secret Soviet military laboratory was built in the 1950s to experiment with biological weapons. Anthrax and other types of bacteria that could be used to trigger epidemics in enemy territory were bred, tested and stored here. 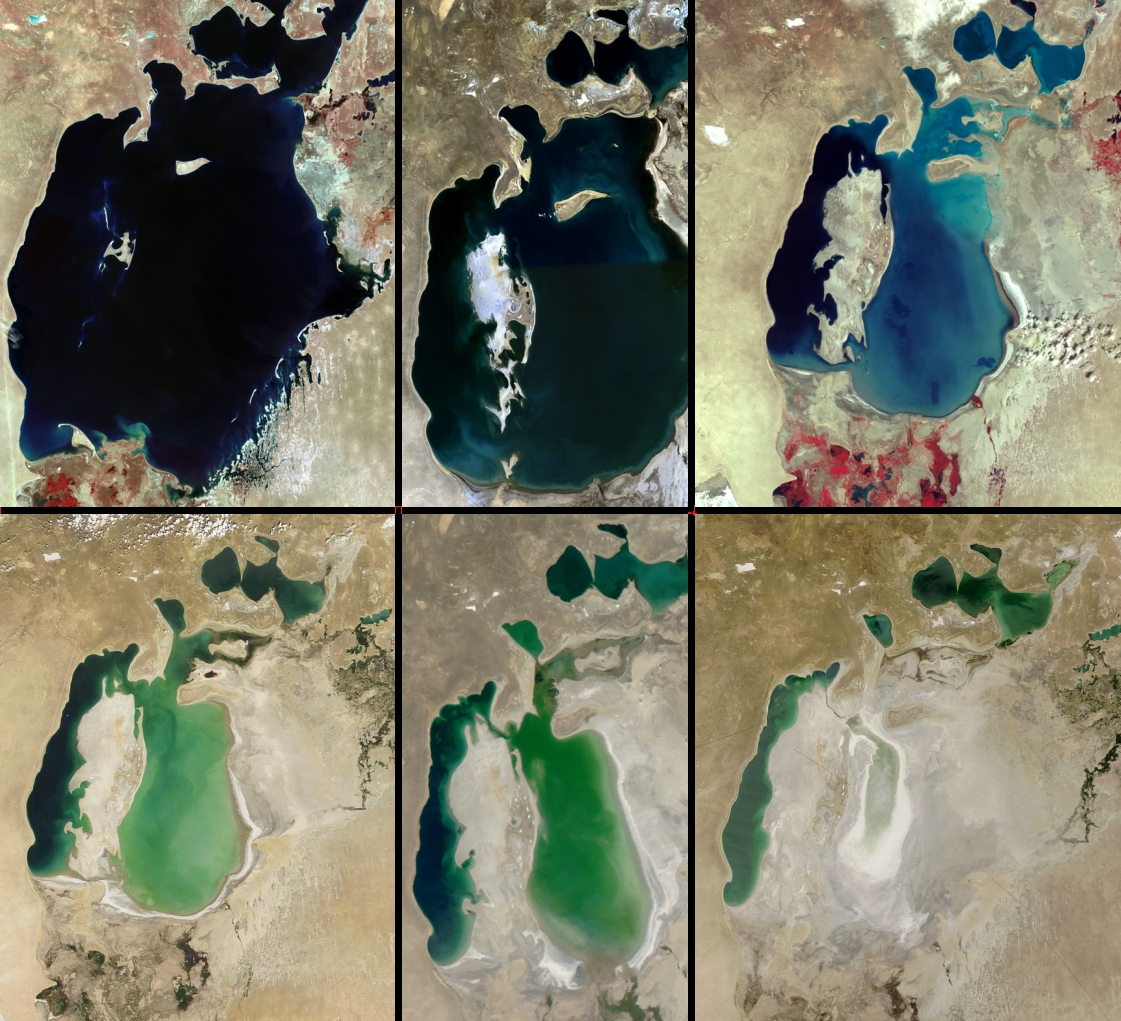 Access to Vozrozhdeniya Island and the shipwrecks that had nowhere to escape from the declining water levels is hampered by the unique location and status of this place. The northern part of the island belongs to Kazakhstan, the southern to Uzbekistan. Both are closed and inaccessible due to the border, as well as the area’s military past and the potential threat of deadly bacteria buried there. It is true that American experts visited the island in 2002 and neutralized more than 100 tons of anthrax, but many scientists doubt the effectiveness of this operation. Anthrax can survive in extremely adverse conditions and attack suddenly. With all this, the ban on bringing in and flying drones seems to us like child’s play.

With all this, the ban on bringing in and flying drones seems to us like child’s play

The large sand Aralkum Desert has appeared on the dried-out sea, so the island can only be reached by land. From the north, you can go through the village of Kurlandy in Kazakhstan and then cross the desert by car, motorcycle and, finally, on foot — a total of more than 100 km. And on the way, cross a quite large river using a hand-made raft. You can also try from the southern side, via the Uzbek city of Moynak, once one of the Aral Sea’s largest ports but today lies more than 100 km away from it. On the way, we don’t encounter any rivers, but the distance we have to cover on foot is much greater than on the northern side. The prevailing desert climate and temperatures significantly hinder this venture. Although we tried to get to the former island from both sides, we ultimately managed only from one. 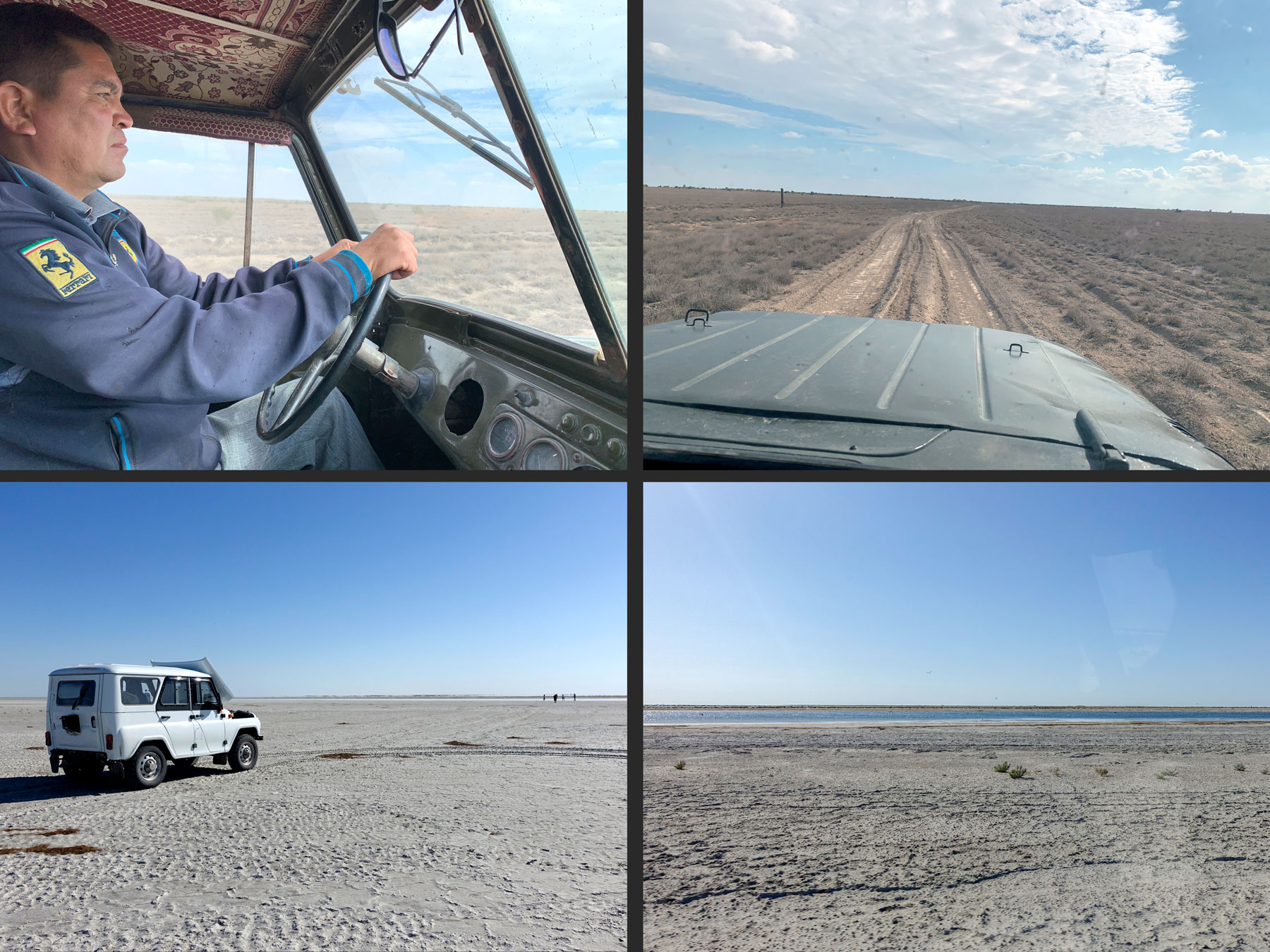 As with my trip to Baikonur, the main issue is with the weight of our equipment, which we will have to carry on our backs for several dozen kilometers. Camping equipment does not weigh much, and you can still give up some things at the cost of convenience. It is much more difficult to reduce the weight of the photo and film equipment, especially when you care about taking photos of the highest possible quality. The most challenging, however, is economizing on water, which weighs the most. The risks can also be weighed. For example, should you take extra water or a satellite phone? Should anything happen, the phone would make it possible to call for aid and the water supplies would help us survive until help arrives. The closest town is more than 200 km away, so we wouldn’t be able to get there on our own. 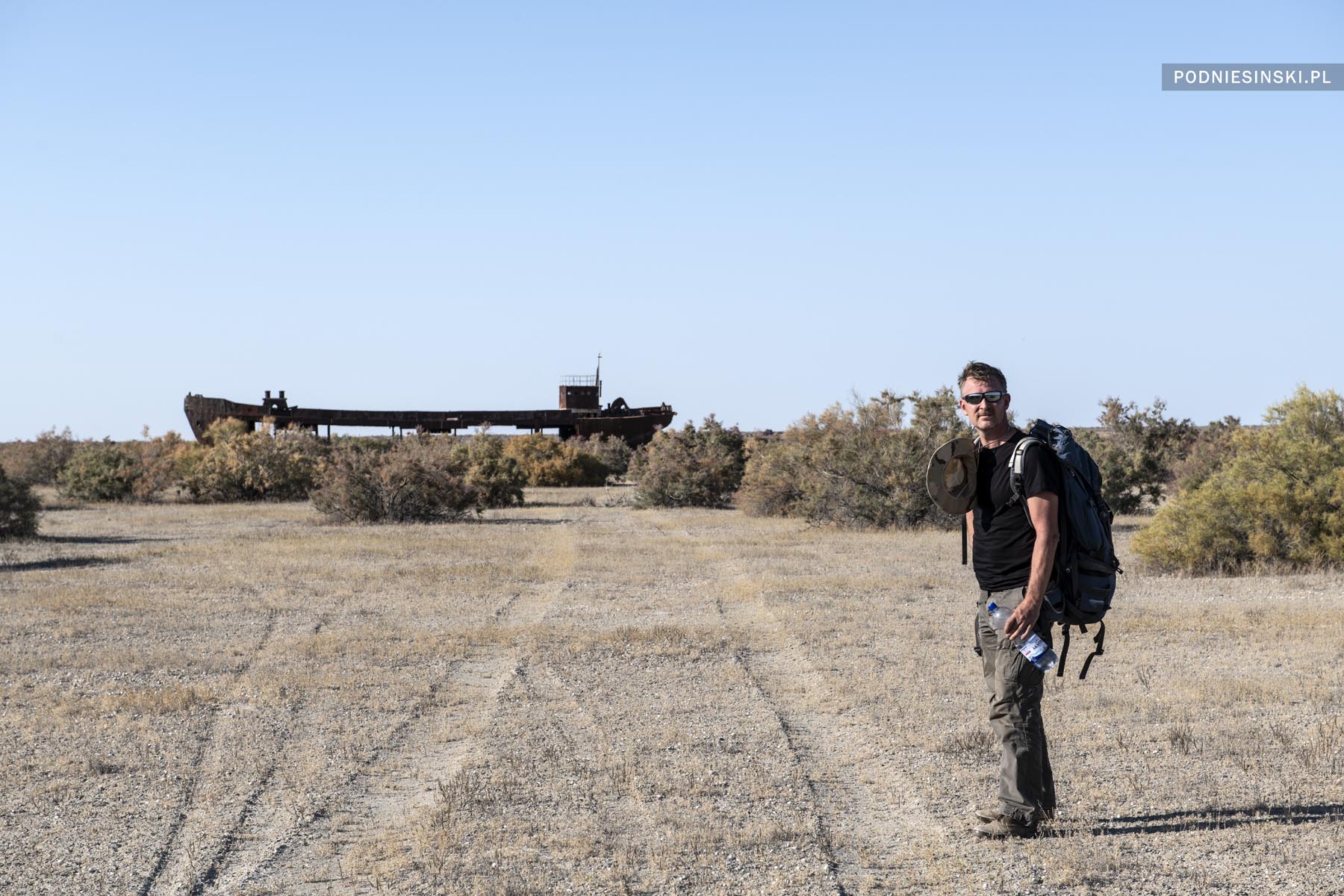 The road to our goal is not difficult, but long. After covering much of the distance by car, we take the last several dozen kilometers on foot.

The road to our goal is not difficult, but long. After covering much of the distance by car, we take the last several dozen kilometers on foot. It is hot, nearly 30C. The terrain is a desolate, sandy, covered here and there by small shrubs. Sometimes, we go through overflow areas dozens of meters in diameter where water periodically returns due to higher rainfalls and then dries out in the sun, creating a cracked layer of salt. A careless step can make the hard crust rupture and send your feet into thick, black mud-like goo. Were it not for the small shells lying on the ground, it would be difficult in most areas to tell that we were walking along the bottom of what once was a lake. Only the shipwrecks standing in the middle of nowhere will reveal where we are and make us realize the enormity of the catastrophe with which we are dealing. 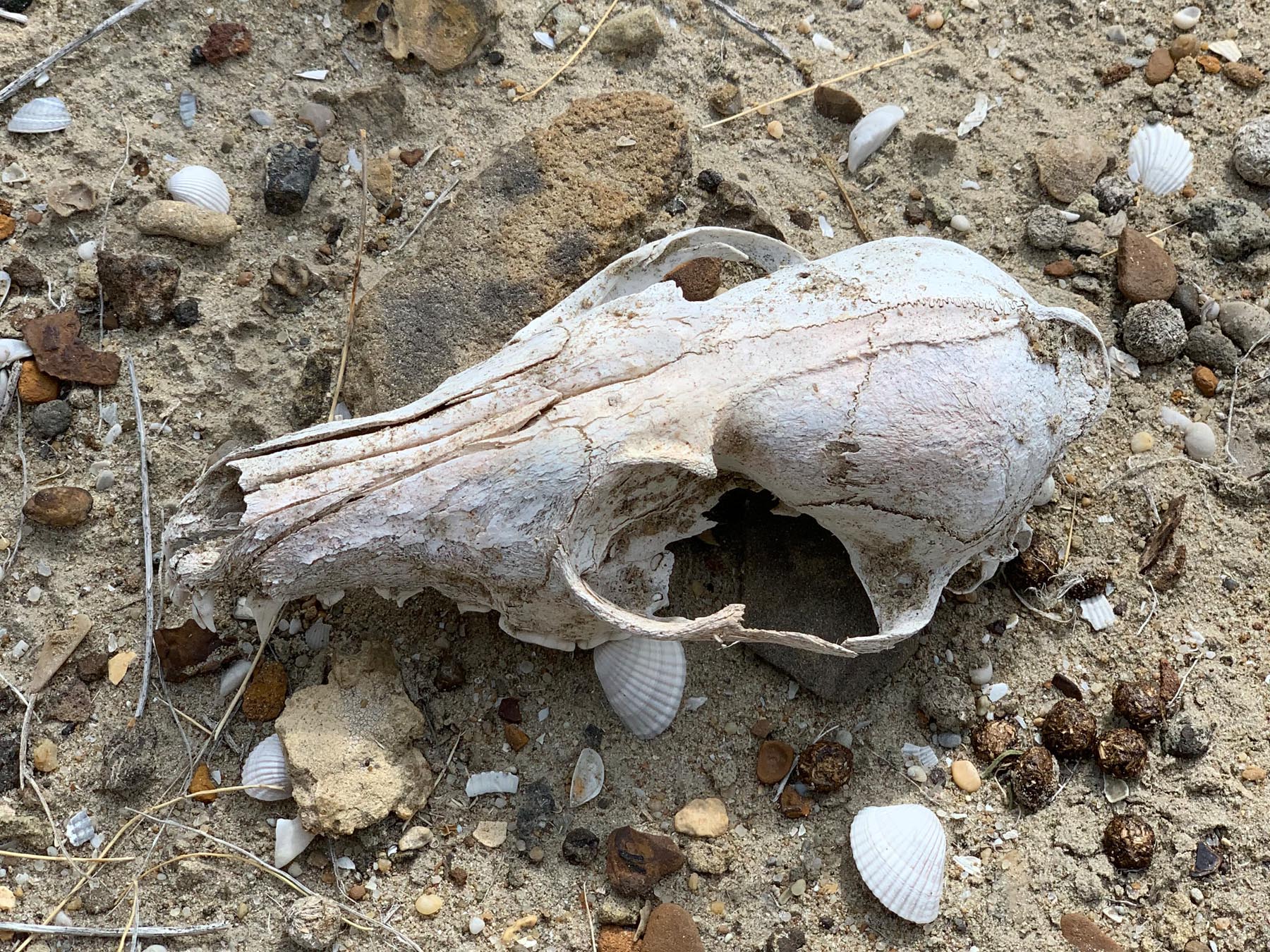 Were it not for the small shells lying on the ground, it would be difficult in most areas to tell that we were walking along the bottom of what once was a lake 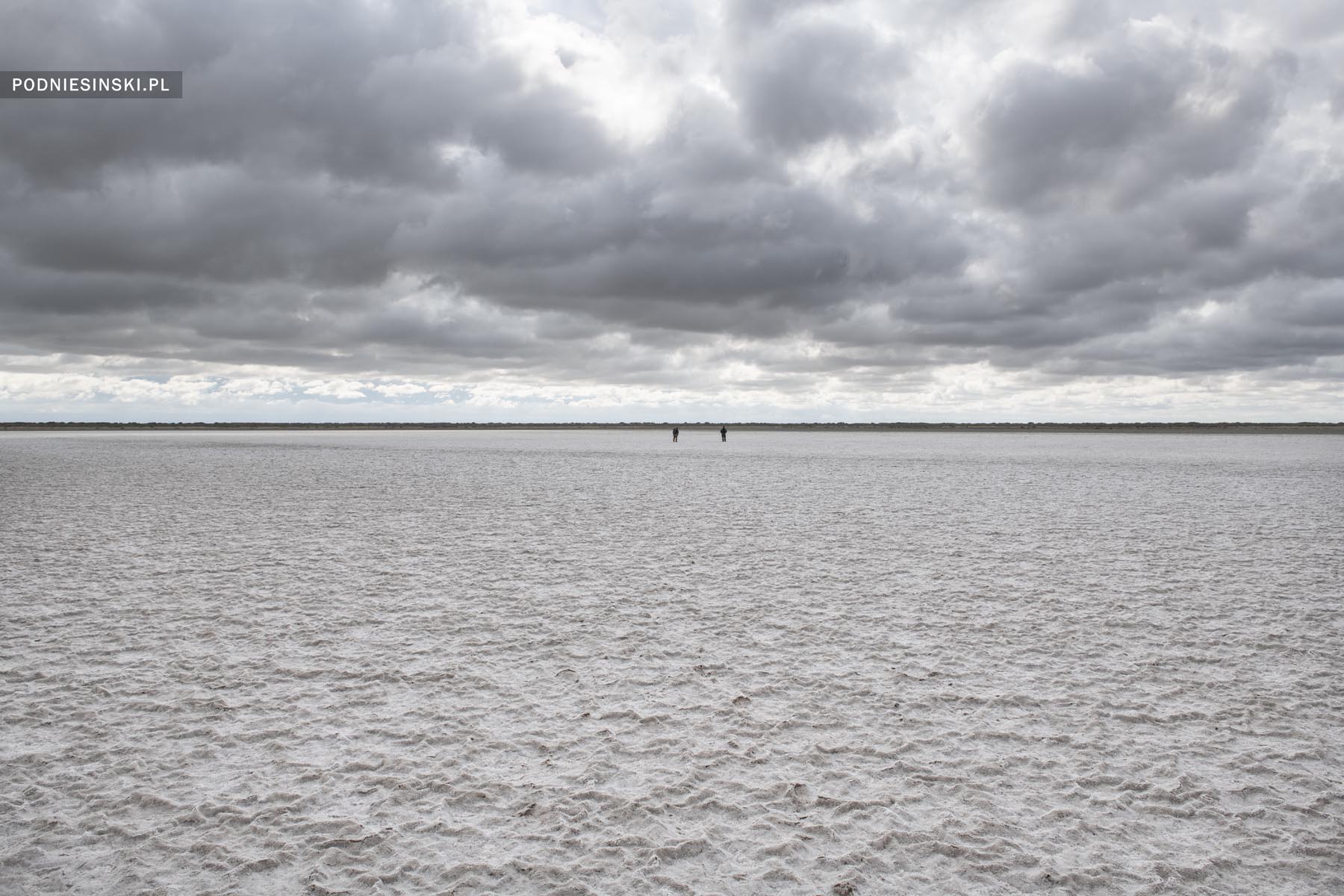 Sometimes, we go through overflow areas dozens of meters in diameter where water periodically returns due to higher rainfalls and then dries out in the sun, creating a cracked layer of salt 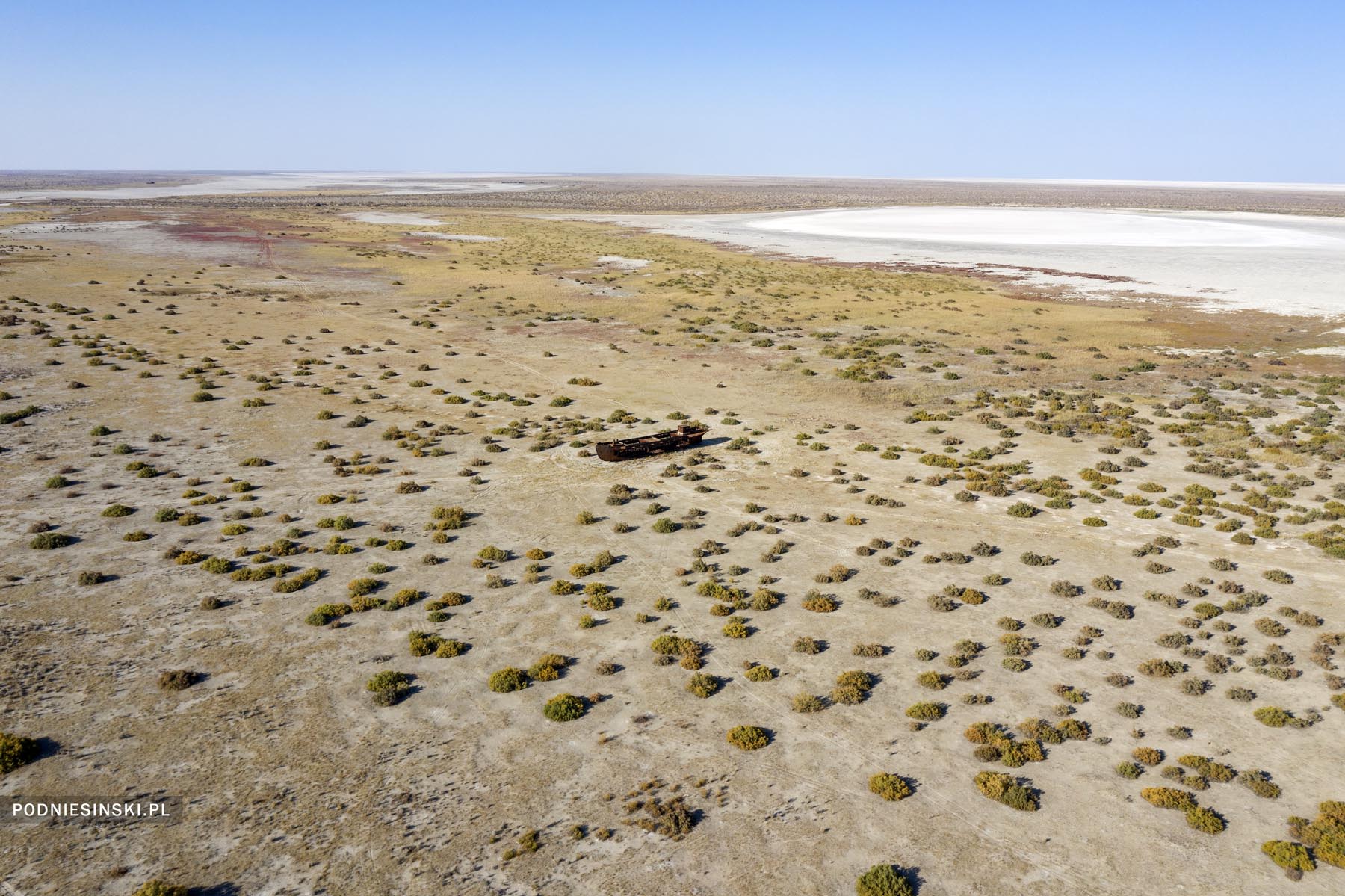 A salt storm surprises us at night. It spreads around particles of salt resting on the seafloor along with pesticides used in the cultivation of cotton that had once flowed into the reservoir. Additionally, the temperature drops to 8C. We do not sleep the whole night, and, in the morning, I wonder if my eyes are stinging from a sleepless night or from the salt or other chemicals that got into them. I don’t smell or taste salt, but it’s all over me — in my hair, on my face, and on my clothes. A single dose of these chemicals probably won’t hurt me, but it’s worse for the inhabitants of nearby towns who have to inhale this poisonous dust every day, resulting in increased incidences of cancer, anemia and respiratory diseases. 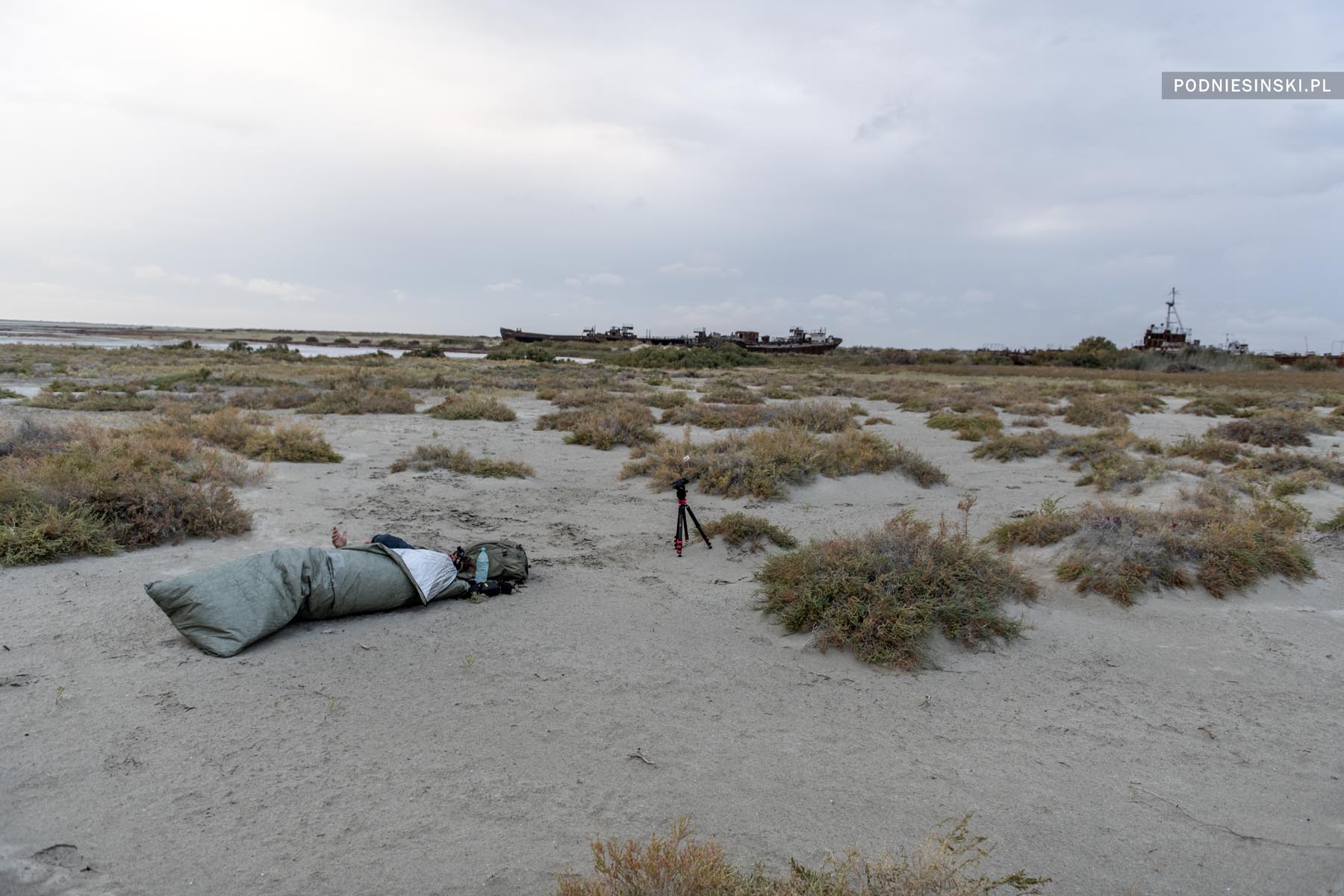 The next day, we reach the largest concentration of rusting wrecks that once made up a proud fishing fleet of the Soviet Union. There are about twenty of them gathered around the island’s former port. As the water levels fell with each passing year, the ships had to be moored further and further from the shore. Finally, when the water was too low, any escape route was cut off and they became stuck in place forever. Today, they stand abandoned and rusting in an endless sea of sand, silently telling their own terrifying story of a bygone time. The rest of the wrecks are scattered throughout the area. From a distance, they look like monuments proudly looking towards the endless horizon, as if waiting in solitude for the long-awaited water. They are so large that we can see them from a distance of several kilometers. In 1991, some of them were used to evacuate the liquidated city of Aralsk-7 and the secret military laboratory there. 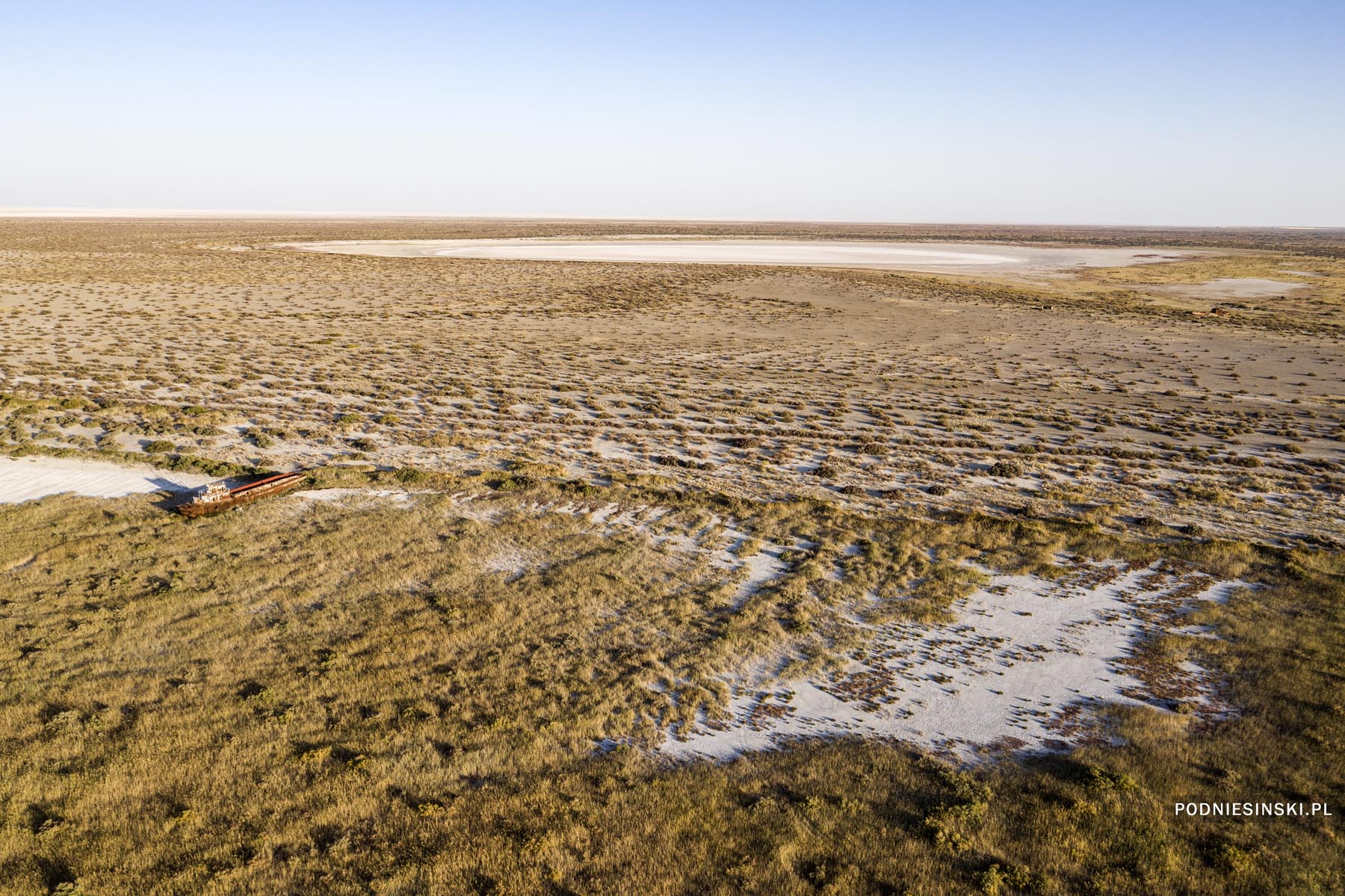 From a distance, they look like monuments proudly looking towards the endless horizon, as if waiting in solitude for the long-awaited water 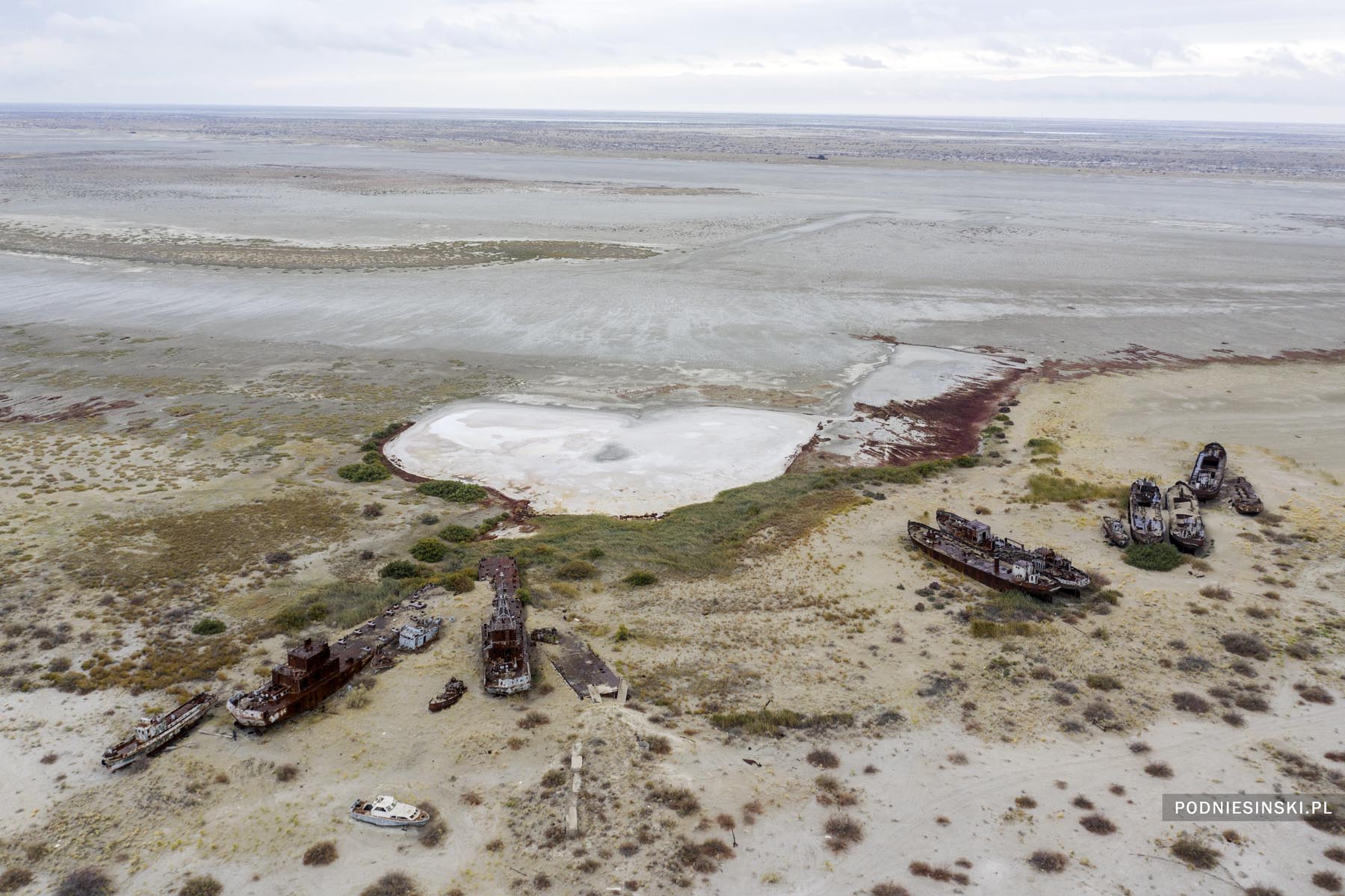 In 1991, some of them were used to evacuate the liquidated city of Aralsk-7 and the secret military laboratory there

As usual, the way back is the hardest. It causes the most trouble, especially for Phil, who misjudged the amount of water and equipment needed. Or his abilities. Extremely exhausted, he asks for a sip of our water more and more often, and at one of our stops he removes the heaviest equipment from his backpack. When the video head and battery hit the sand, we ask what’s going on, and Phil replies that he’s “on the edge”. The situation becomes really serious. Together with Simon, we decide to help our friend by carrying his equipment. But that was not the end of our problems. When we returned to the prearranged meeting point, no car or driver was waiting for us. It’s good that there is water, at least. We hid some in the nearby bushes before the expedition in case of a situation like this. In such moments, a bit of laughter is best. A little dark humor to alleviate the tension. So, I joke that it’s good Phil did not get rid of his satellite phone because it may end up being more valuable than the water left nearby. About an hour later and 5 km away, the driver turns up. It turns out he was afraid to come to the pickup point because border guards were patrolling the surrounding area. 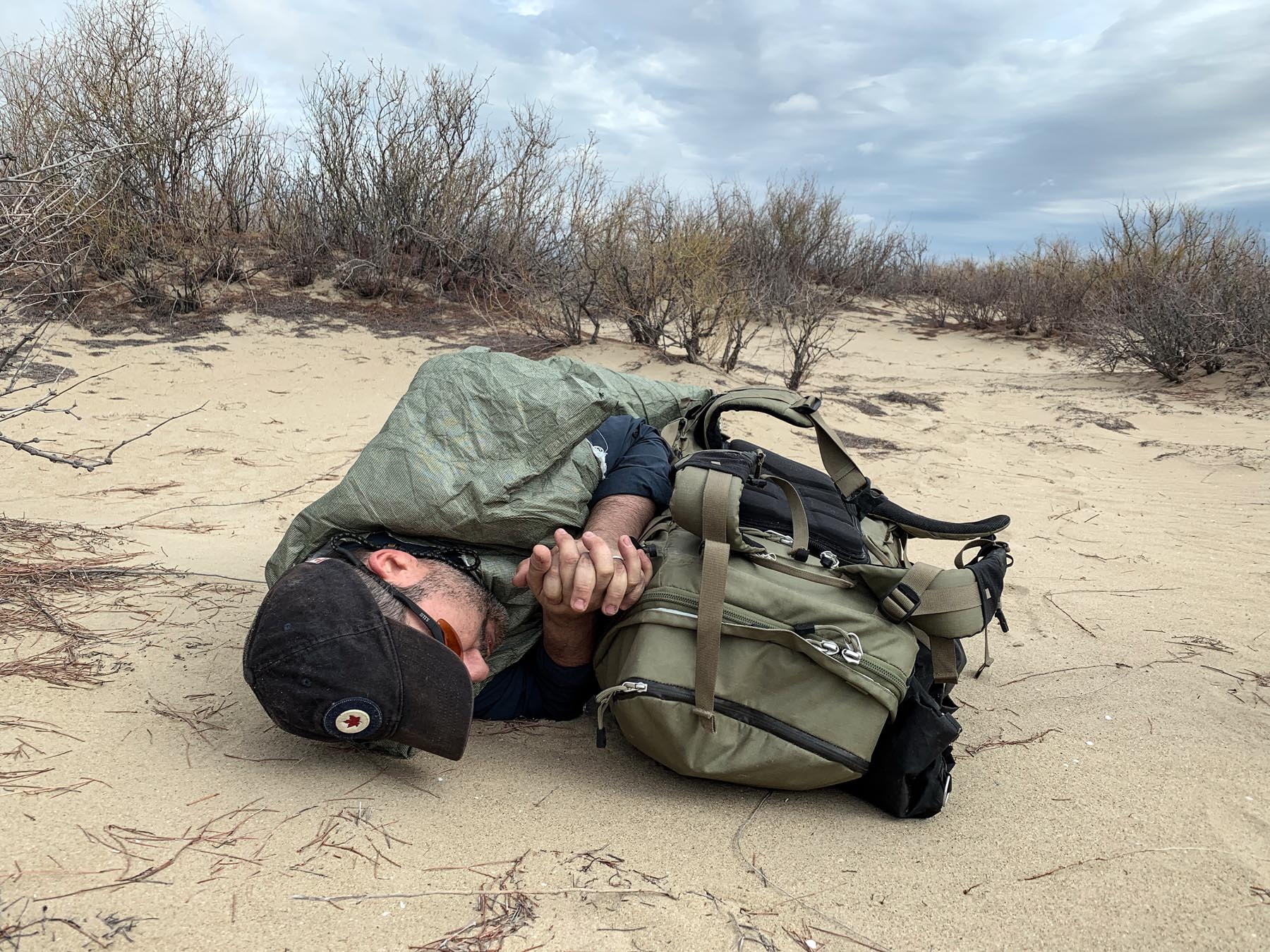 All of these difficulties, adversities and risks were quickly forgotten, however. They are lost amid the extremely interesting, tragic history of the Aral Sea, the unforgettable views and impressions, and the joy of the successful conclusion to our trip. And, there are the most important things — photos. They were what mobilized us for this trip and can be viewed below. 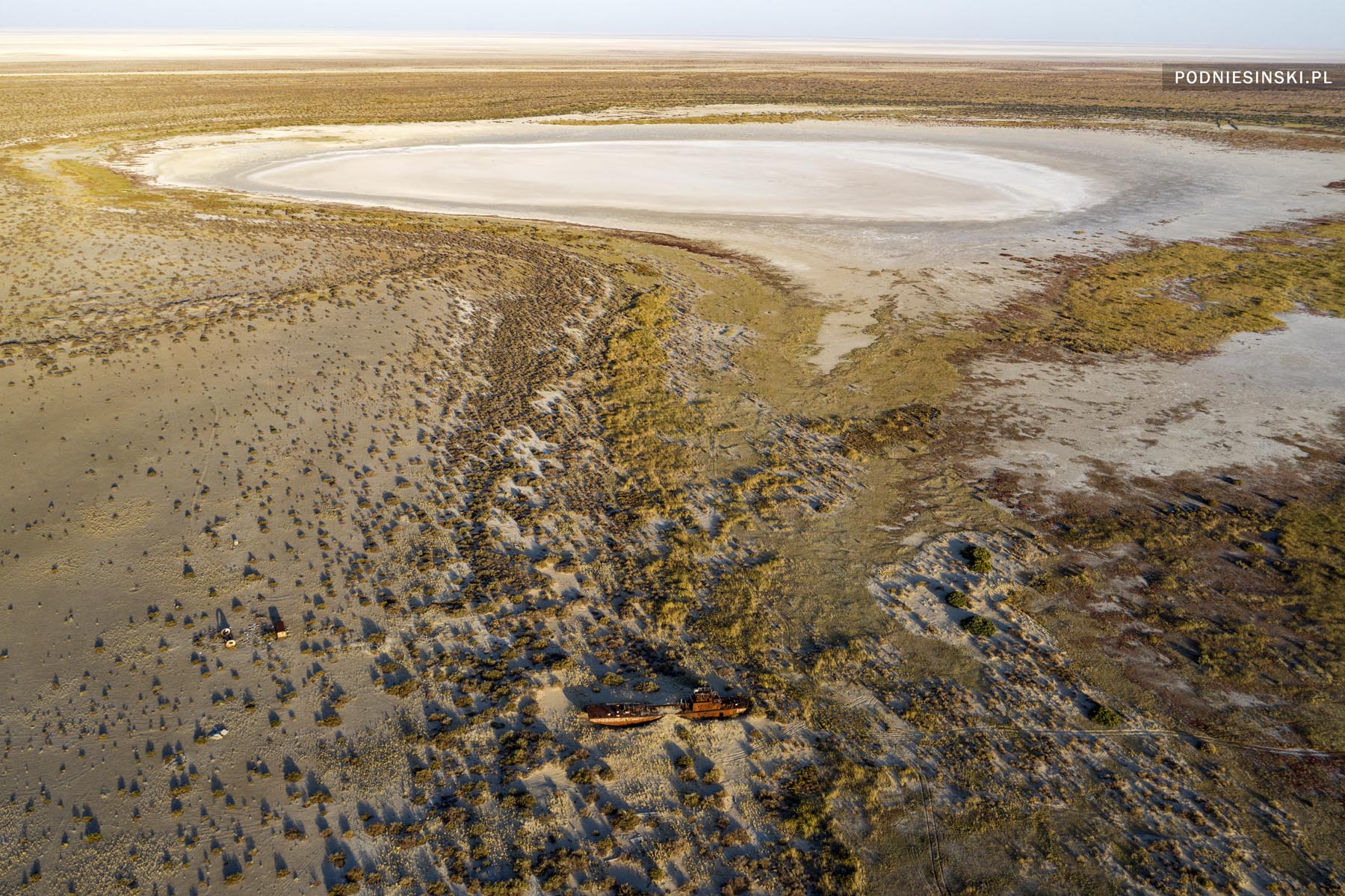 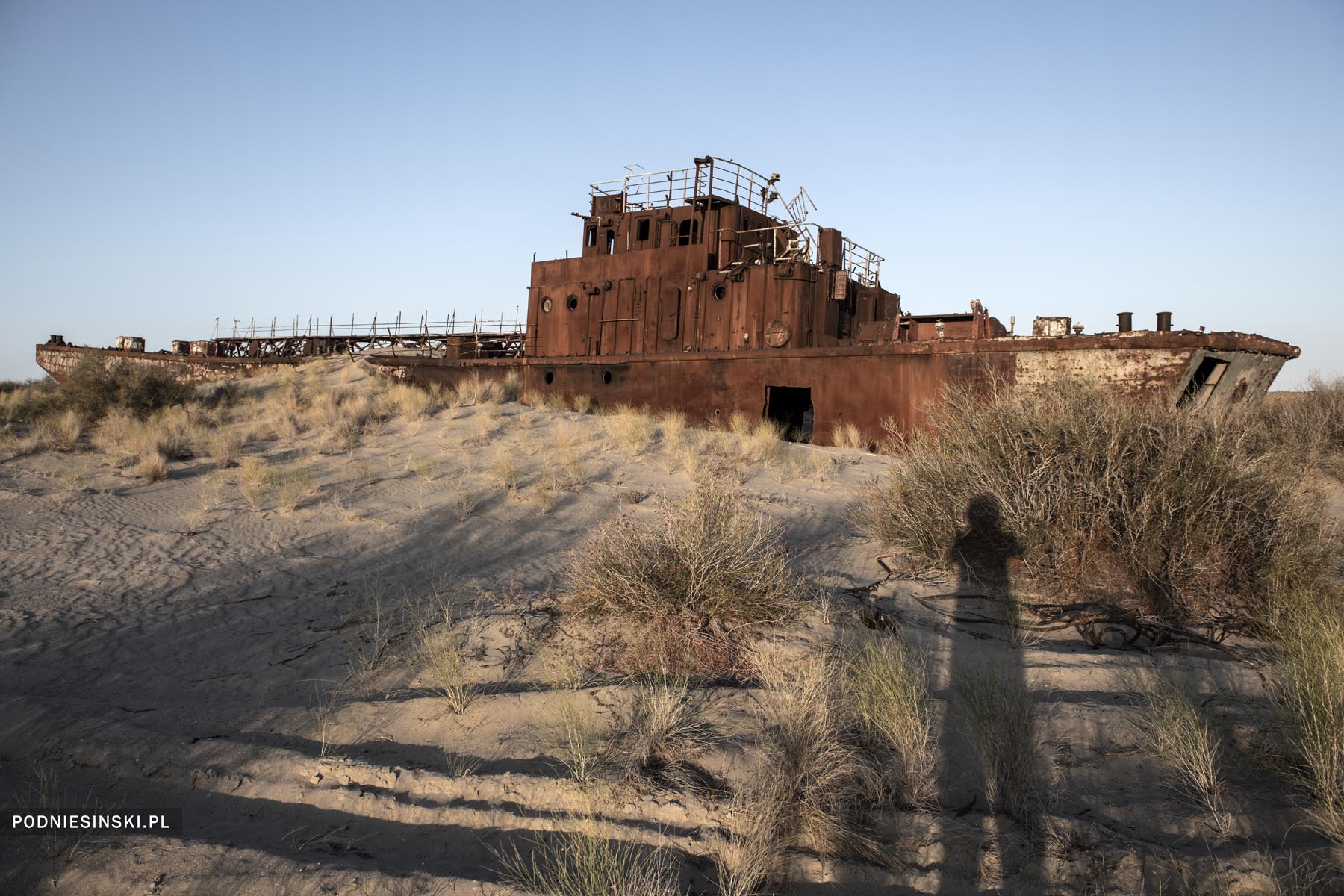 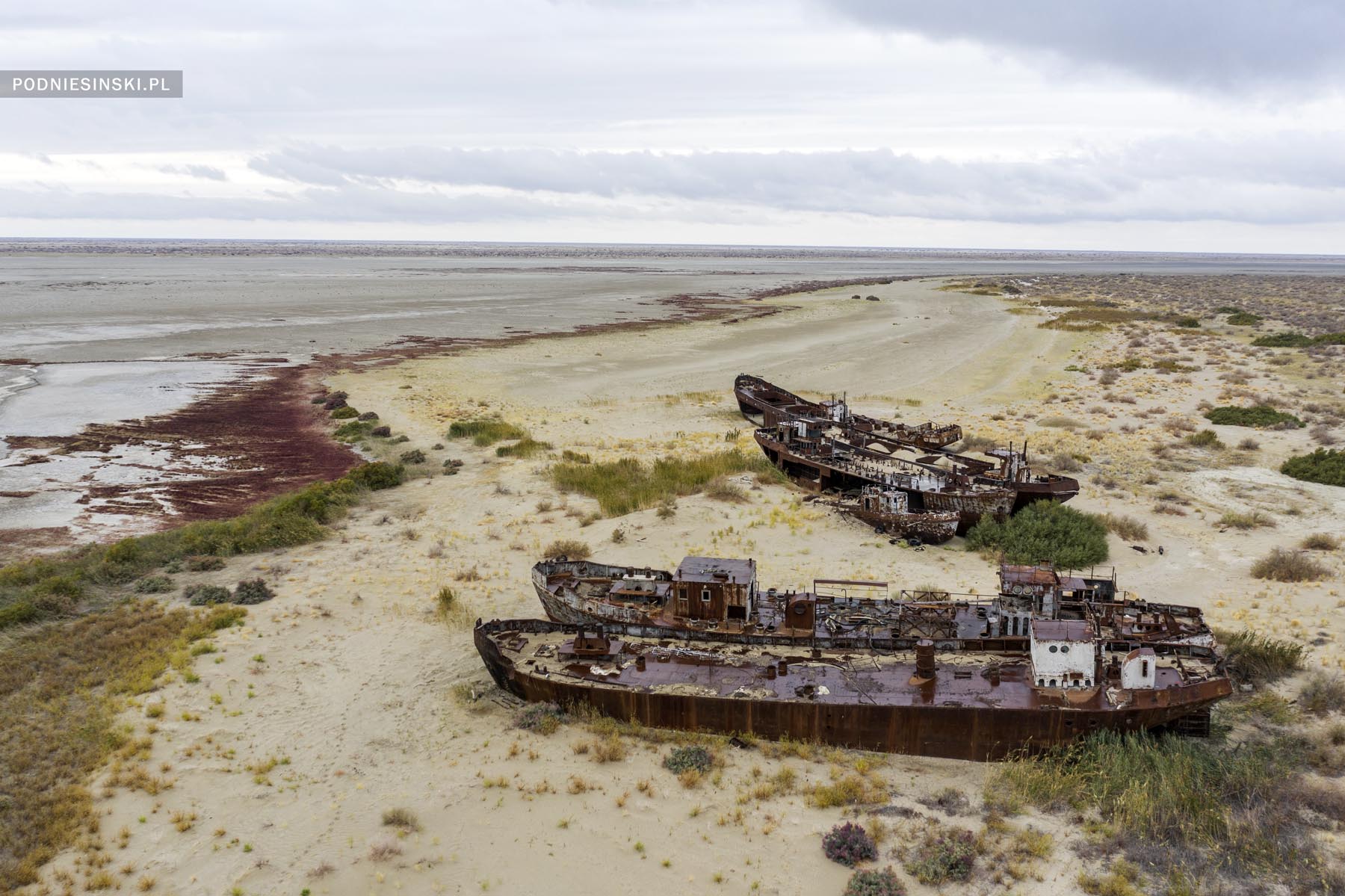 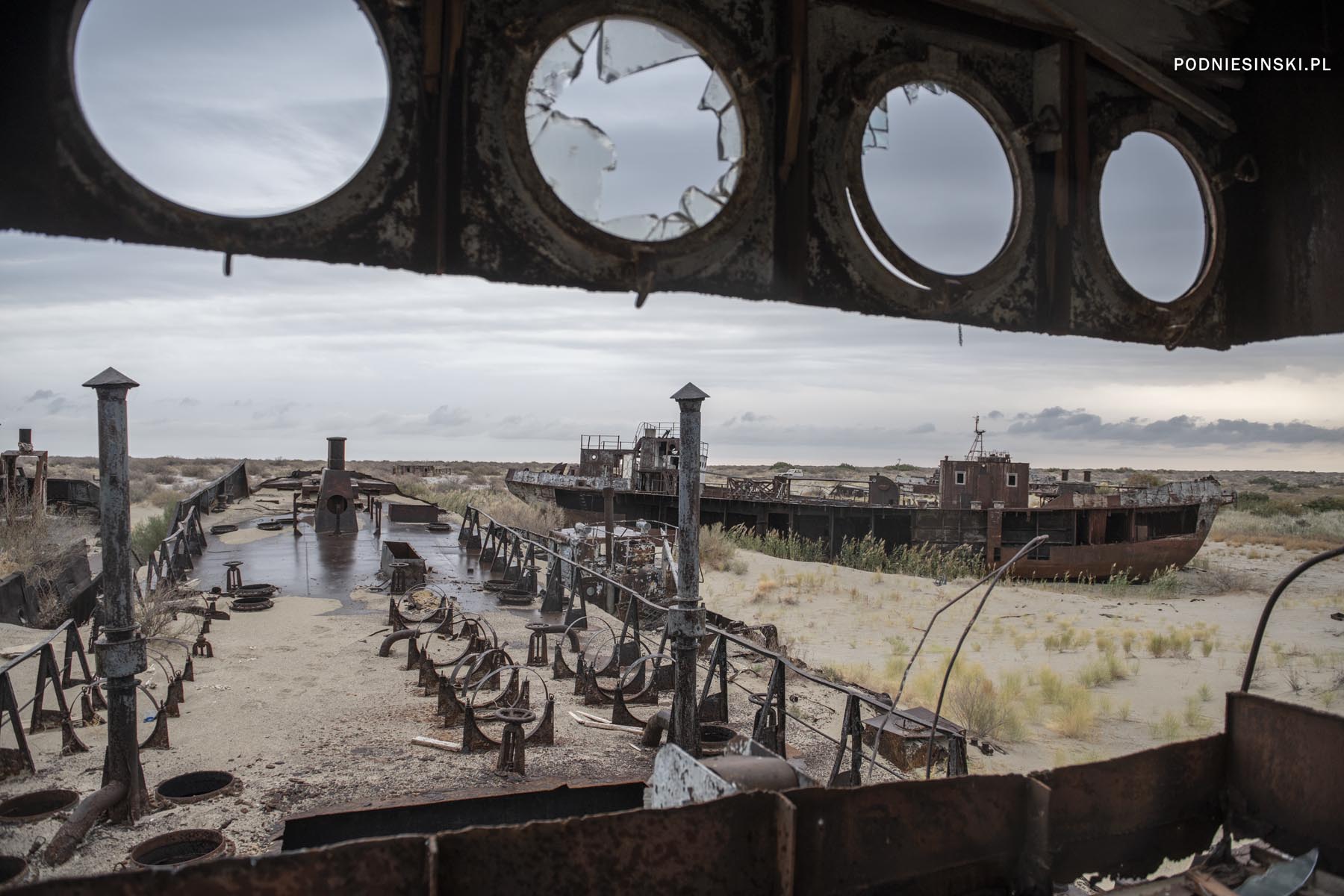 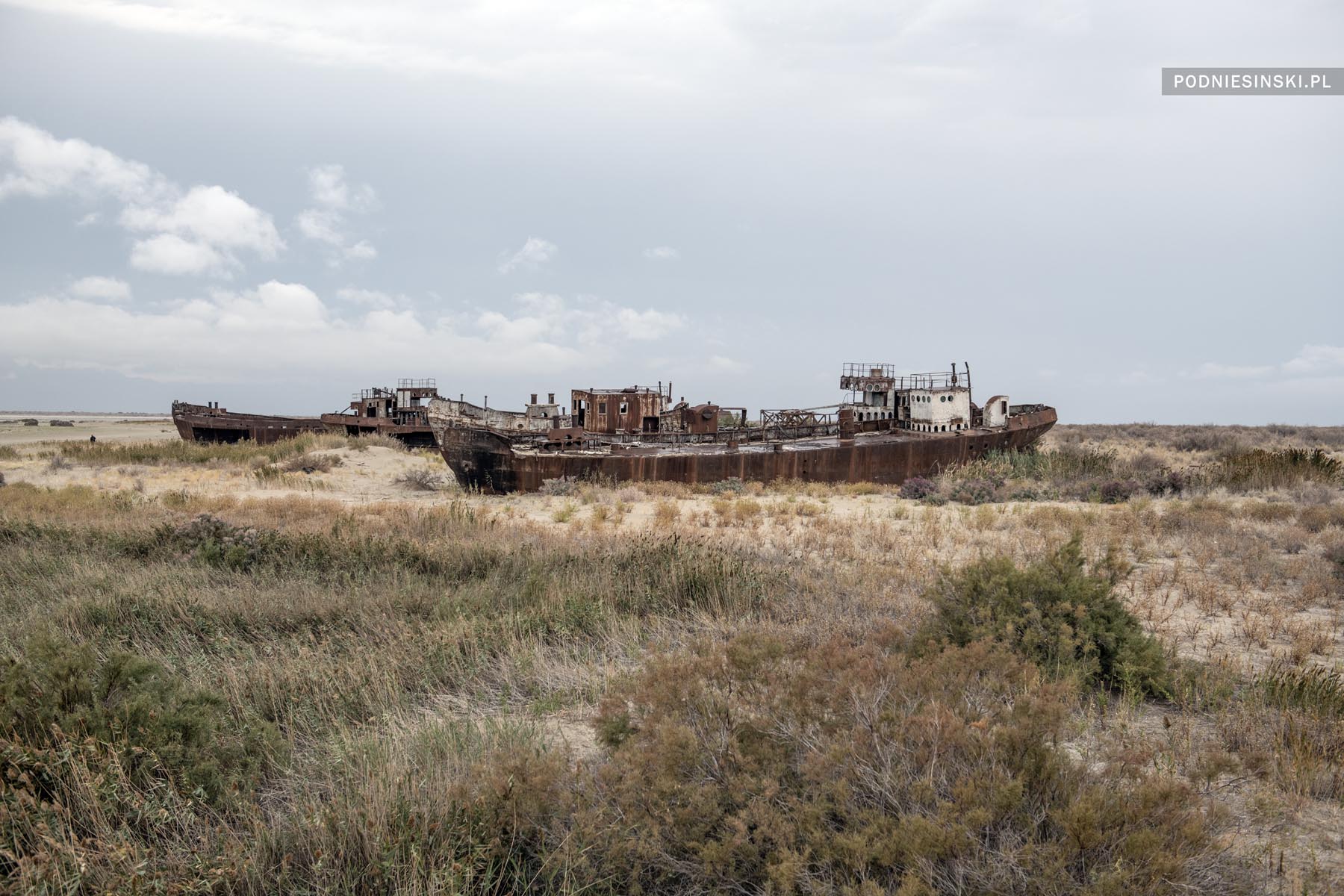 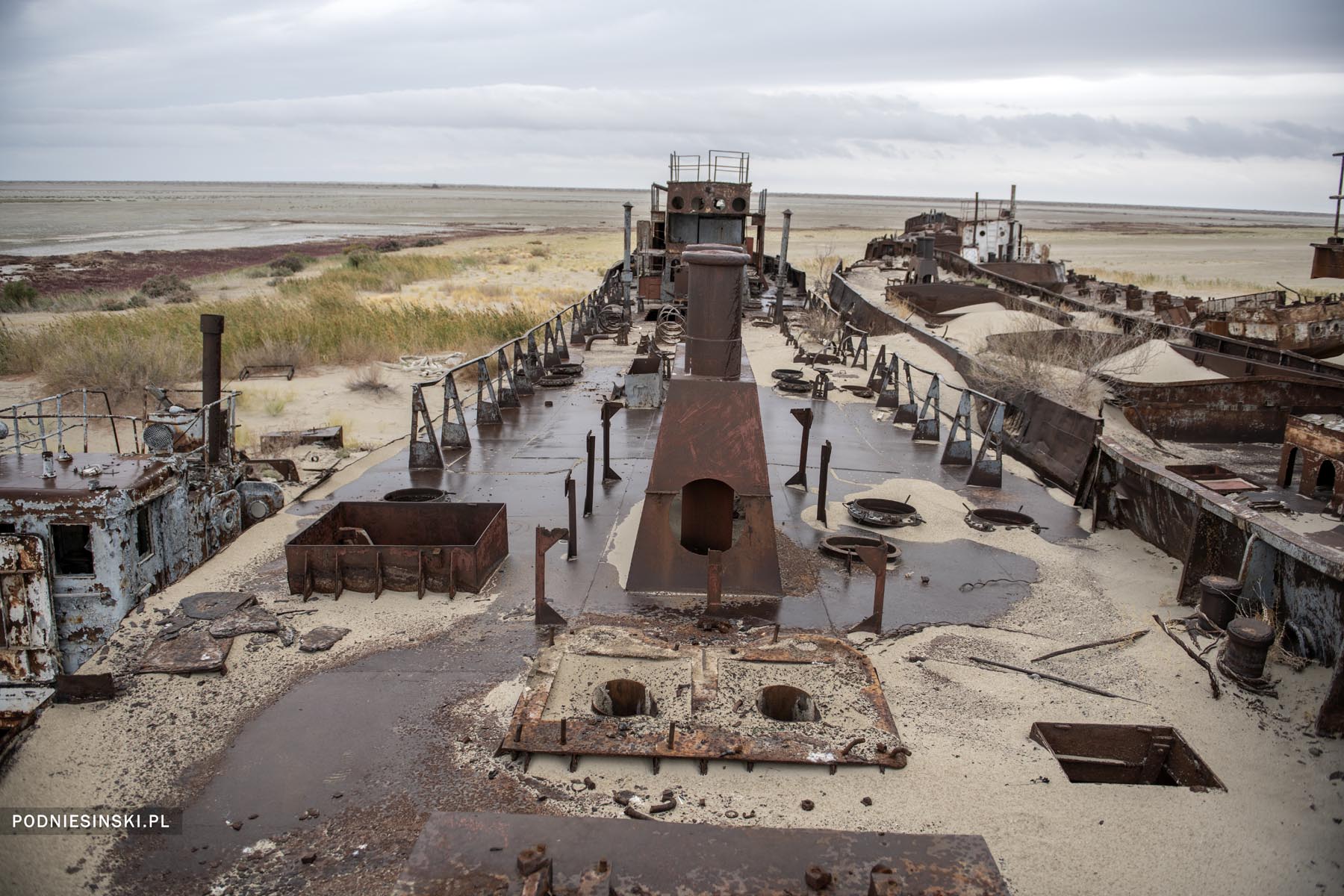 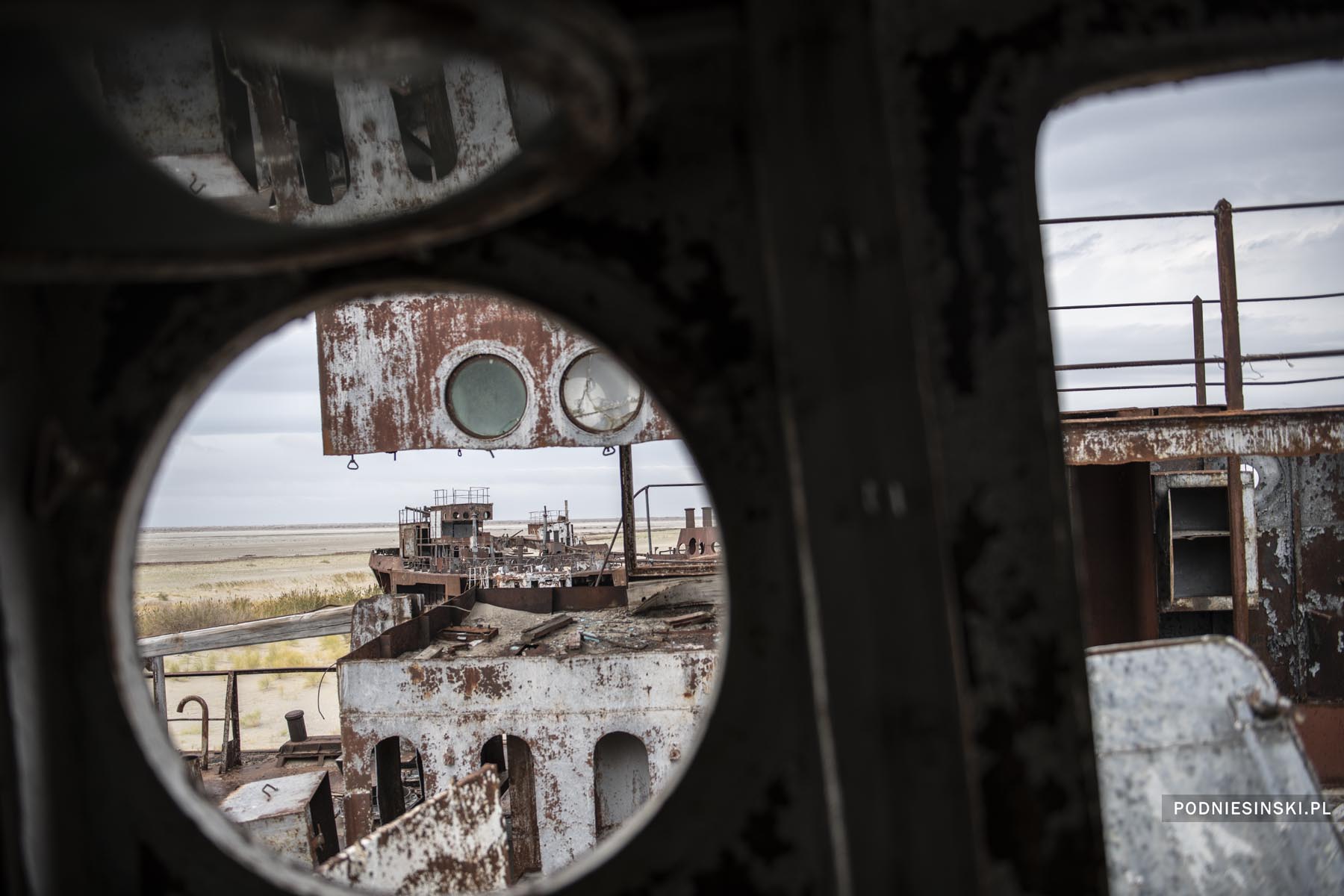 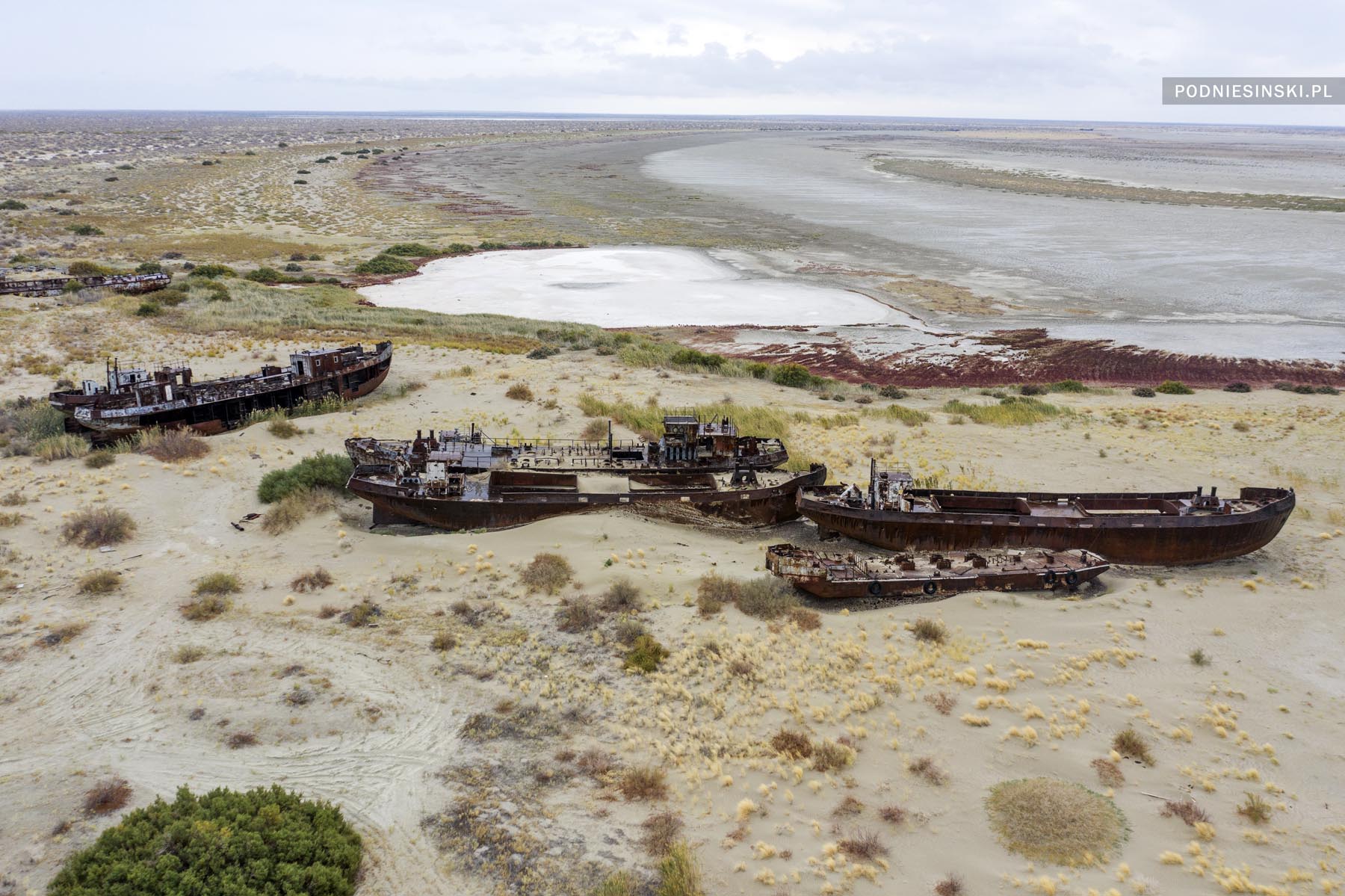 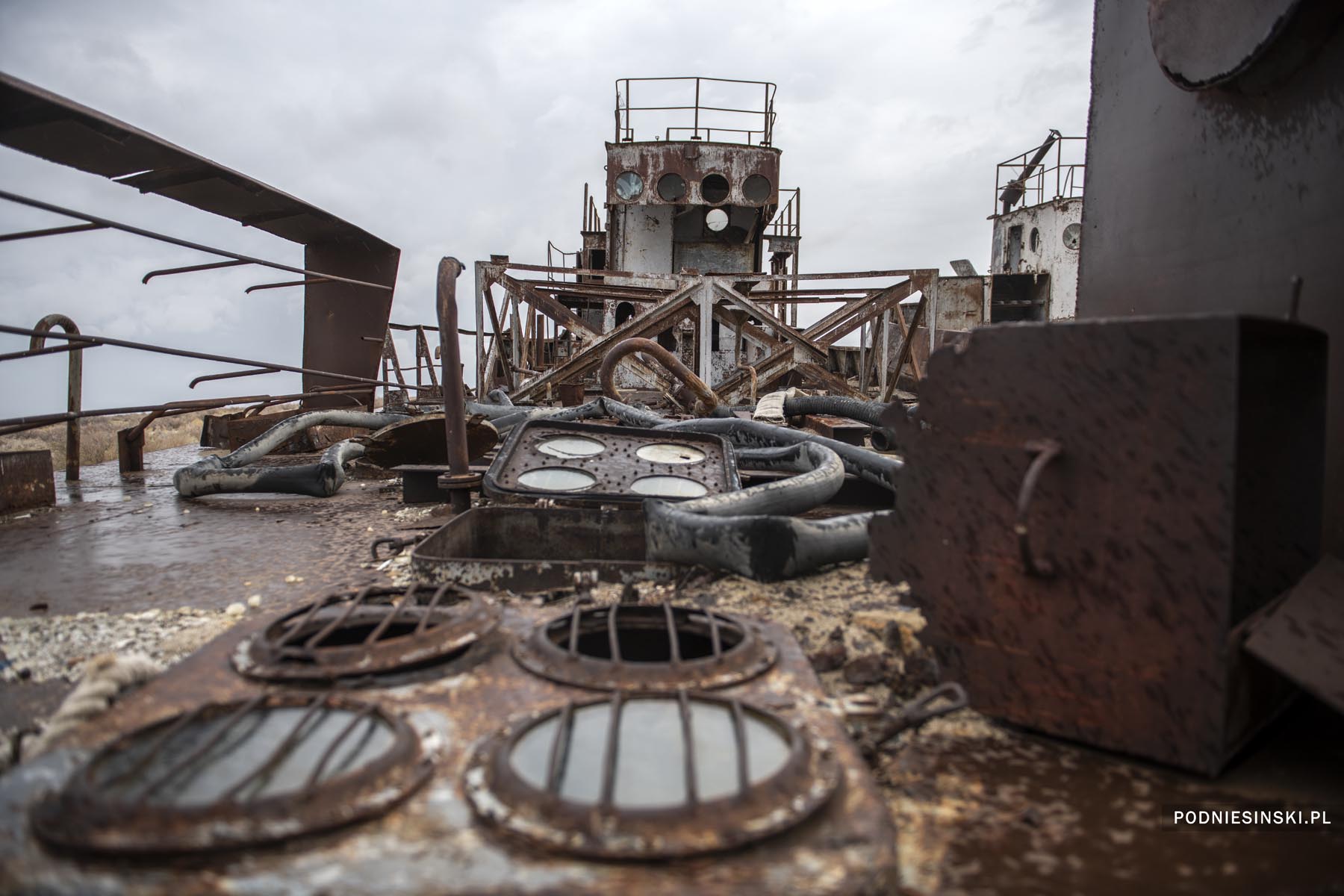 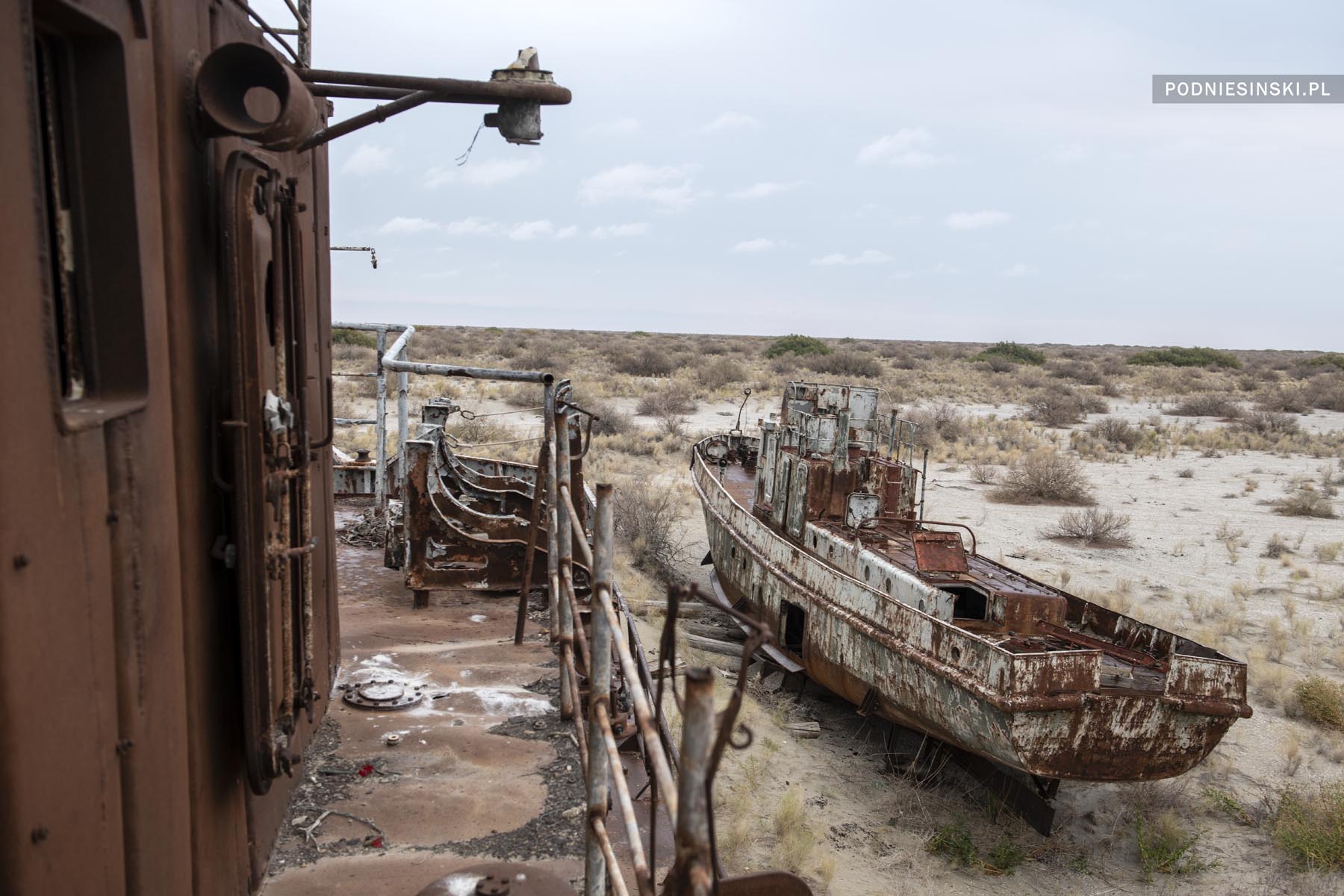 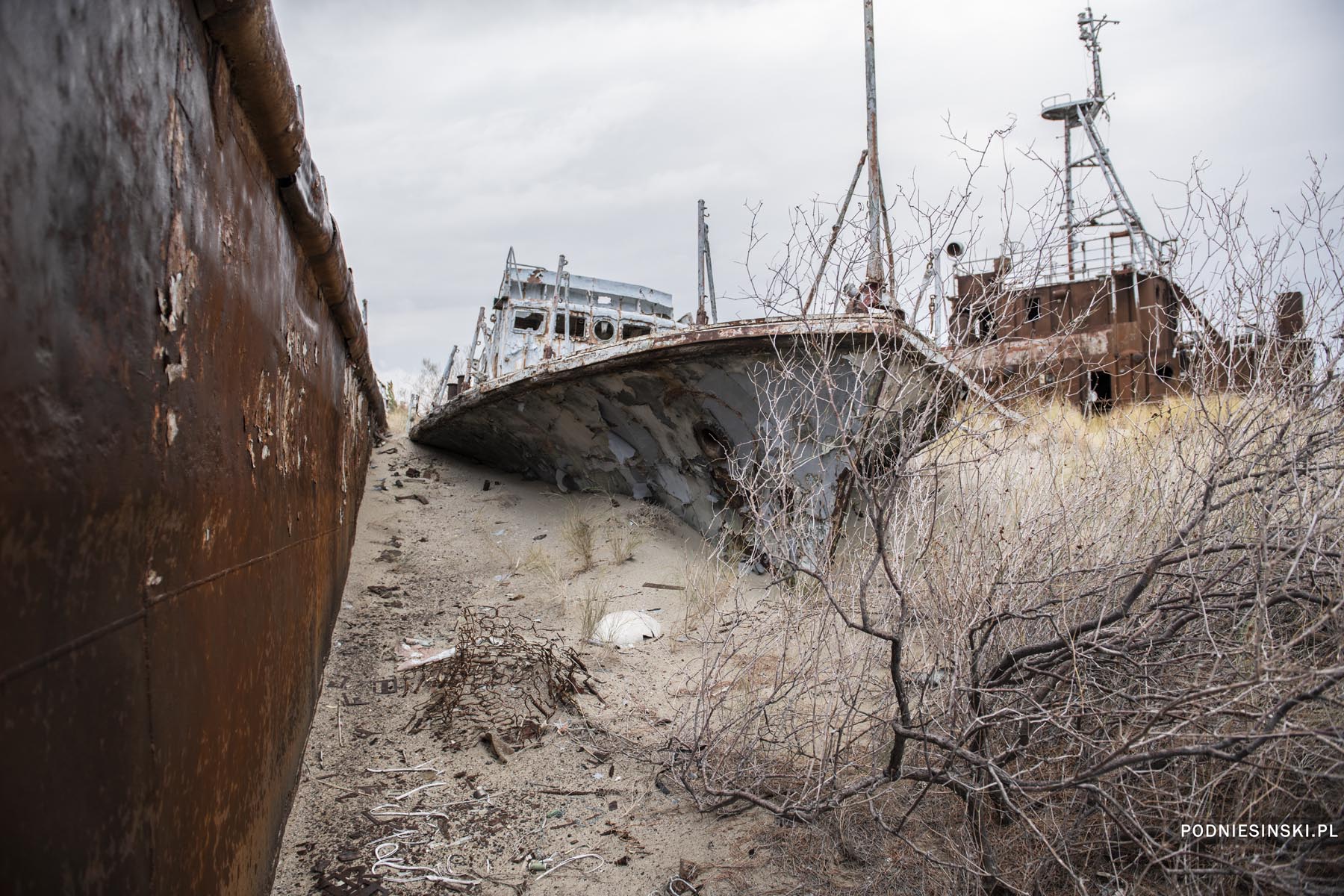 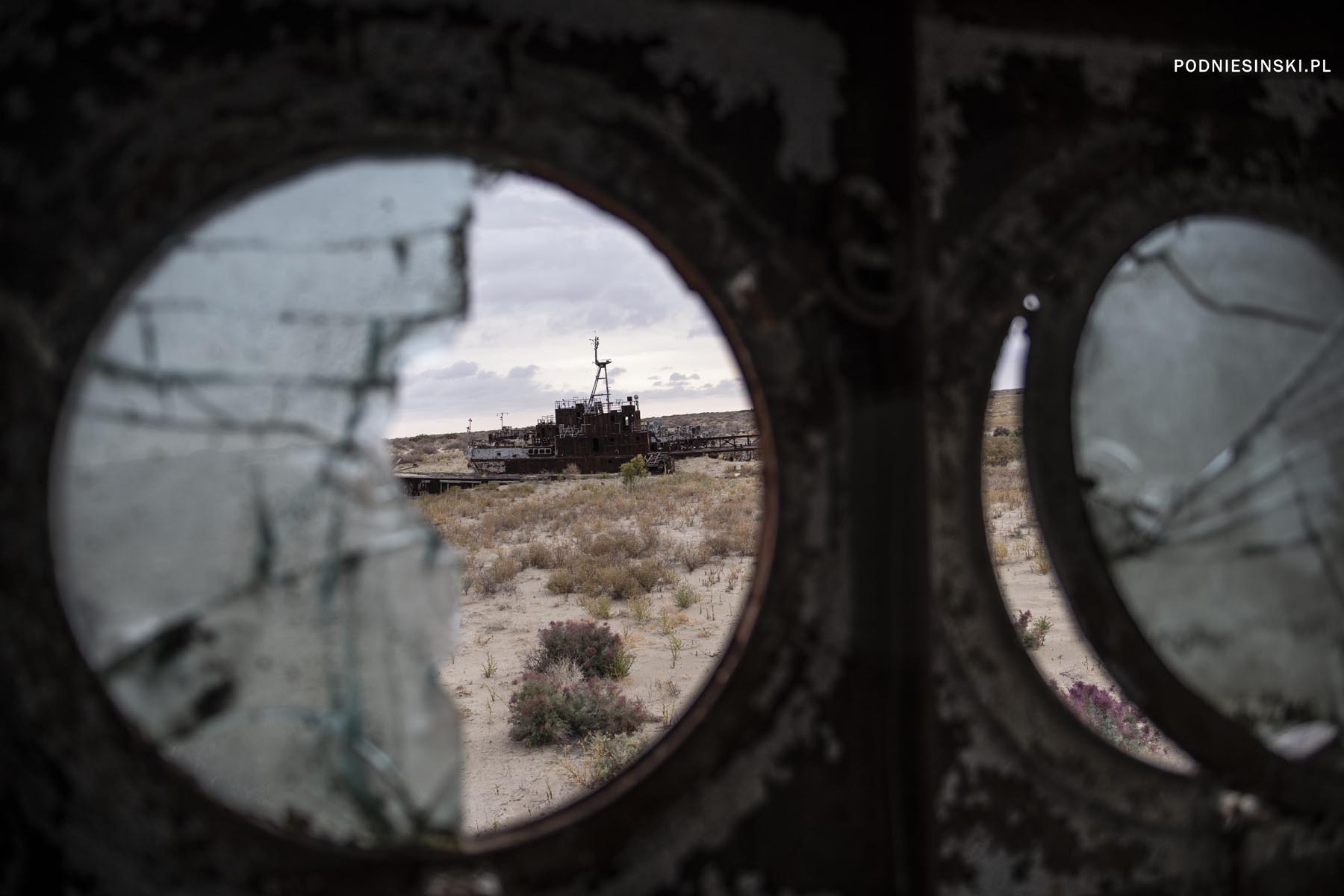 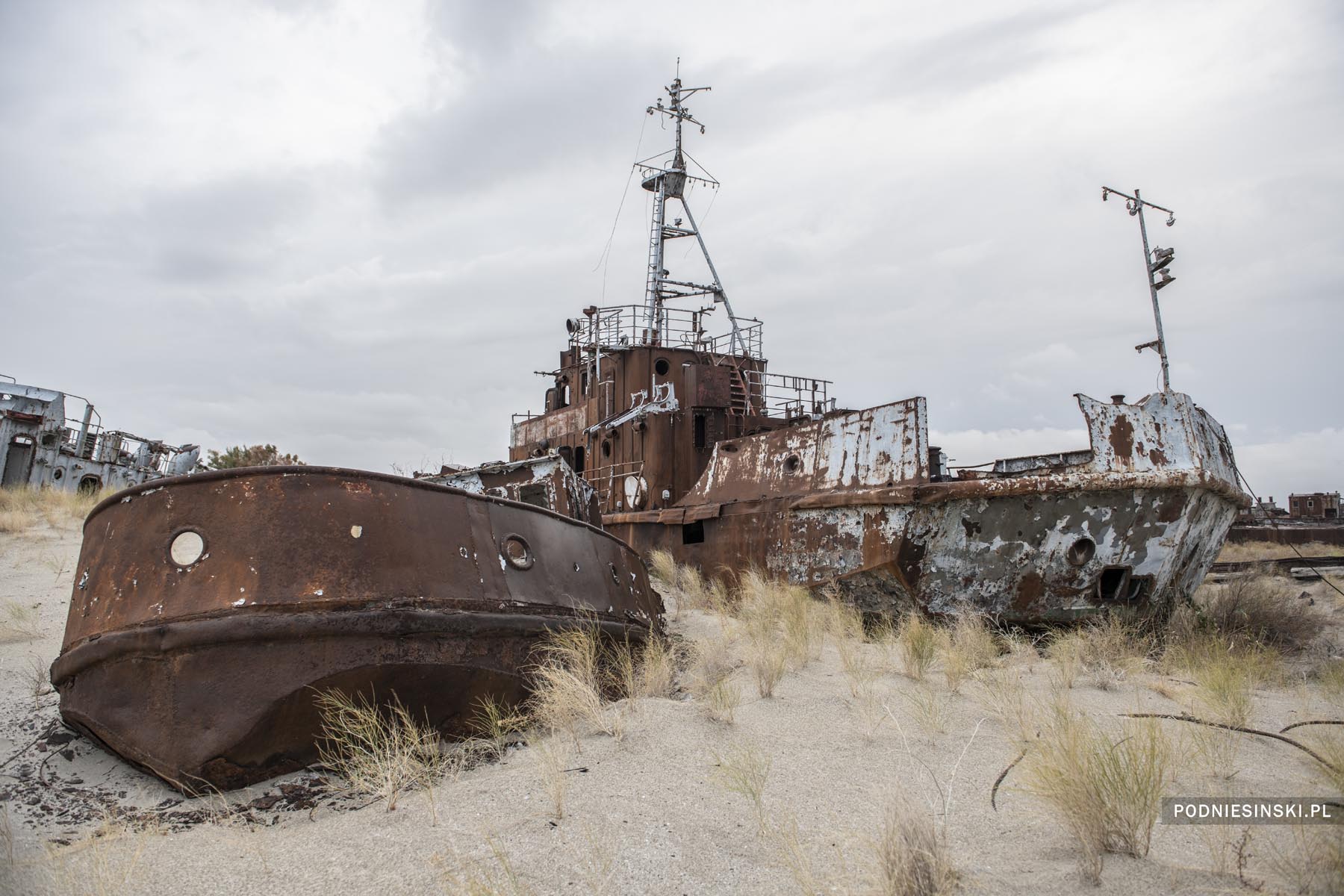