For nearly half a century, the People’s Republic of Albania was such a hermetically sealed country that it was called Europe’s little North Korea. After the end of World War II, the country became a member of Comecon and the Warsaw Pact, and its communist dictator and supreme commander of the armed forces Enver Hoxha allied with the USSR. From then on, the USSR was treated as a strategic ally in Albania and financial and material assistance from Moscow played a fundamental role in the development of the Albanian armed forces. One of its first effects was the equipping of the air force with Soviet MiG-15 and MiG-17 and, later, MiG-19 jet fighters.

Relations between Albania and the USSR remained close until Stalin’s death. After that, cooperation broke down and the country adopted a pro-Chinese orientation in foreign policy. In return, Albania received not only more economic aid, but also new Shenyang F-5 and F-6 fighter jets, which were licensed versions of the Soviet MiG-17 and MiG-19 jets. Through its cooperation with China, the Albanian Air Force became a significant fighting force in this part of Europe.

In the late 1970s, relations with China cooled and, as a result, the Albanian Air Force struggled to obtain spare parts and keep the fighter jets in good working order. Additionally, the country’s deteriorating economic situation led to a reduction in spending on armaments. Enver Hoxha died in 1985 and a new democratic government was elected in 1992, ending the communist era in Albania. However, the situation of the air force did not improve. In 1997, the banking system collapsed and civil war broke out, during which air bases and most of the jets were destroyed or damaged. Shortly thereafter, the government, struggling financially, withdrew all fighter jets from service and deposited them at the Gjadër and Kuçovë air bases. It hoped to sell them and thus at least partially finance the modernization of the air force. To no avail. The Albanian air force had its last jet flight in December 2005, ending the 50-year era of jet fighters.

We visit Gjadër, the first air base. Part of it was hollowed out of a mountainside so the jets housed there could survive almost any conventional or even a nuclear attack. The underground tunnel was more than 600 meters long and could accommodate about 50 jets and their personnel. Additionally, one of the two entrances had a direct connection to the runway, allowing landing aircraft to get inside the tunnel almost immediately. We go to a small village bordering the airport and there to the small bar where we try to find out from the locals any information we can about the base. It turns out to be half-successful. The people we meet are happy to tell us about the base’s glory days but are unable to confirm whether there are still old jets there, let alone help us get there. They do mention, however, that every evening the soldiers serving there come to the bar, so we can talk to them. It sounds promising. We decide not to wait, however, and go to the base ourselves to check out the situation on the ground. When we approach the entrance gate, a young soldier armed with a Kalashnikov appears immediately. We try to talk, but he doesn’t speak English or Russian, so the conversation goes nowhere. Using a dictionary app on my phone, I try to translate a few sentences, but it has the opposite effect. It gets to the point that the irritated soldier crosses his arms in refusal and, with a universally understandable gesture, tells us to leave immediately. You can’t argue with a Kalashnikov.

We’re luckier at the Kuçovë airbase. It’s located in a town 60 km away, which during the rule of communist dictator Enver Hoxha was called Stalin’s Town. I’m not particularly surprised because in those times there were many towns and places named in honor of the Soviet leader. In Poland, this period lasted from 1953-1956, when Katowice was renamed Stalingród. In Albania, it lasted until 1990. Designed by Soviet planners and built by political prisoners, the airbase could accommodate the most modern aircraft. As in Gjadër, underground tunnels were excavated into the mountainside at the end of one of the runways in order to provide superior protection for the combat aircraft against potential enemy airstrikes. Moreover, dynamite was planted under the runways in the event of a takeover attempt by the enemy.

Today, the Kuçovë airbase looks abandoned, although an Albanian living near the airport says that agricultural planes sometimes use the landing strip or military exercises are held there. He doesn’t recall if any military jets have landed there recently. That would make sense, since the Albanian Air Force has only a few helicopters at its disposal, and its airspace is protected by Greece and Italy. Looking around, we notice that there is a wide metal gate at the end of one of the two runways. As we get closer, we notice the posted warning signs with drawings of cameras, rifles and the words STOP. MILITARY ZONE. Beyond the gate, in the distance, stands a small, one-story building with a man standing next to it. Although he’s not dressed in a military uniform, the Kalashnikov slung over his shoulder leaves no doubt: this area is guarded by soldiers. Perhaps we are in the right place.

Just behind the security building, the road narrows and turns slightly, then runs through a small ravine surrounded by steep slopes a dozen meters high. At the top, the slopes are covered with rows of olive trees stretching all the way to the horizon, while at the bottom they change into thickets of trees and thorny bushes. They make an excellent barrier and protection against prying eyes. So much so that most locals are unaware of the existence of this inconspicuous alley at the foot of the ravine, along which stand dozens of old MiG-15, MiG-17 and MiG-19 fighters or their Chinese copies. 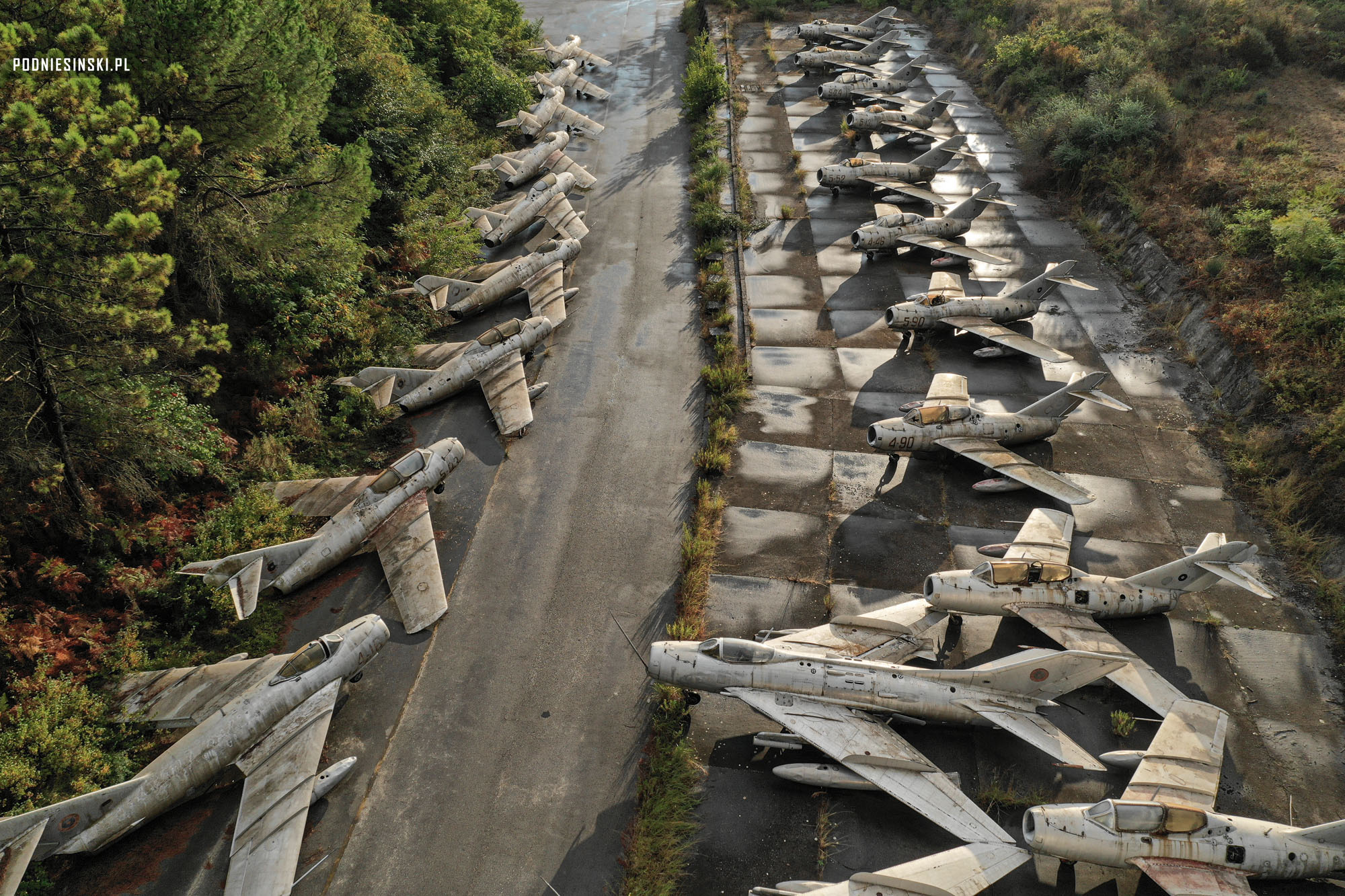 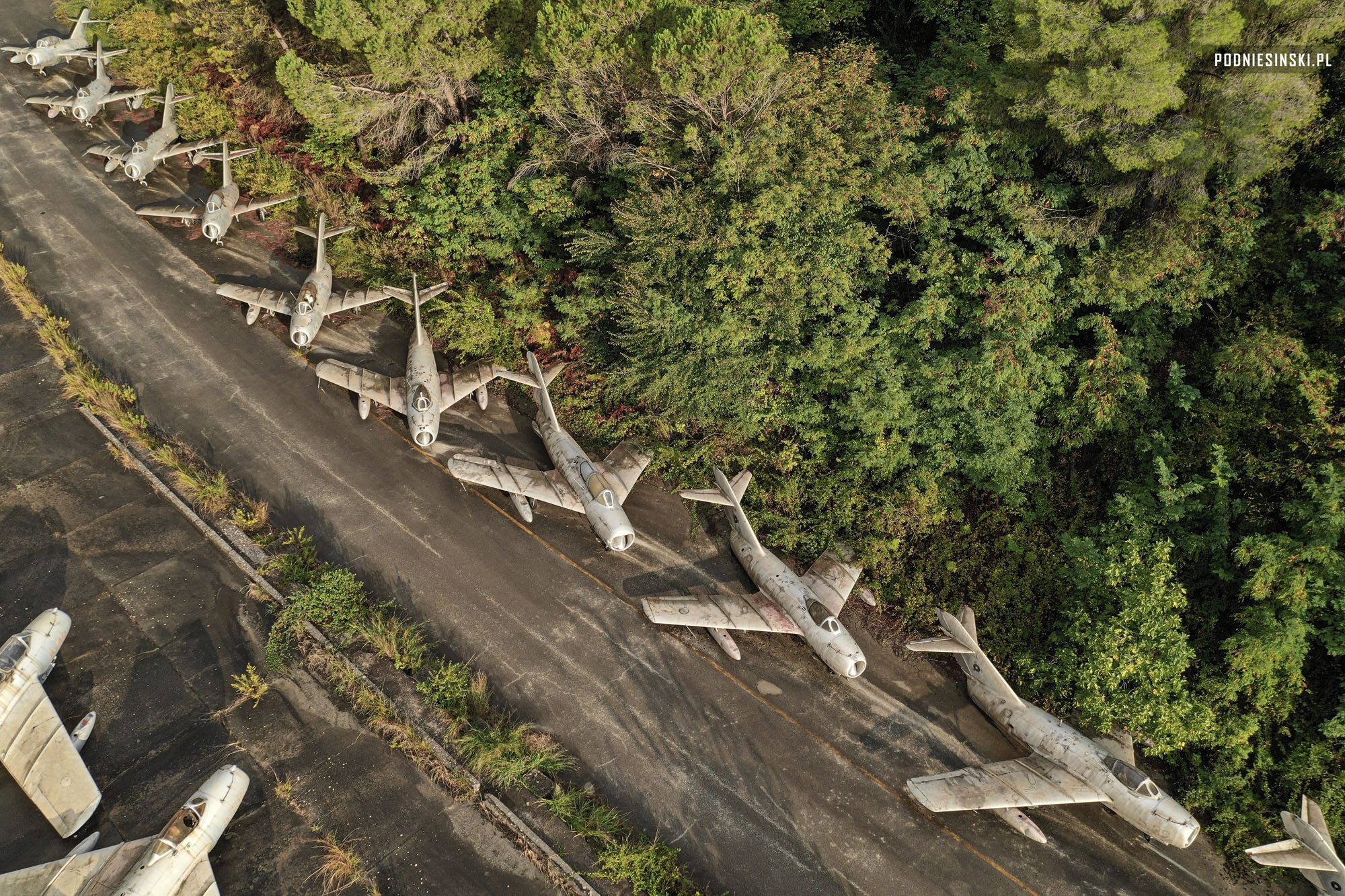 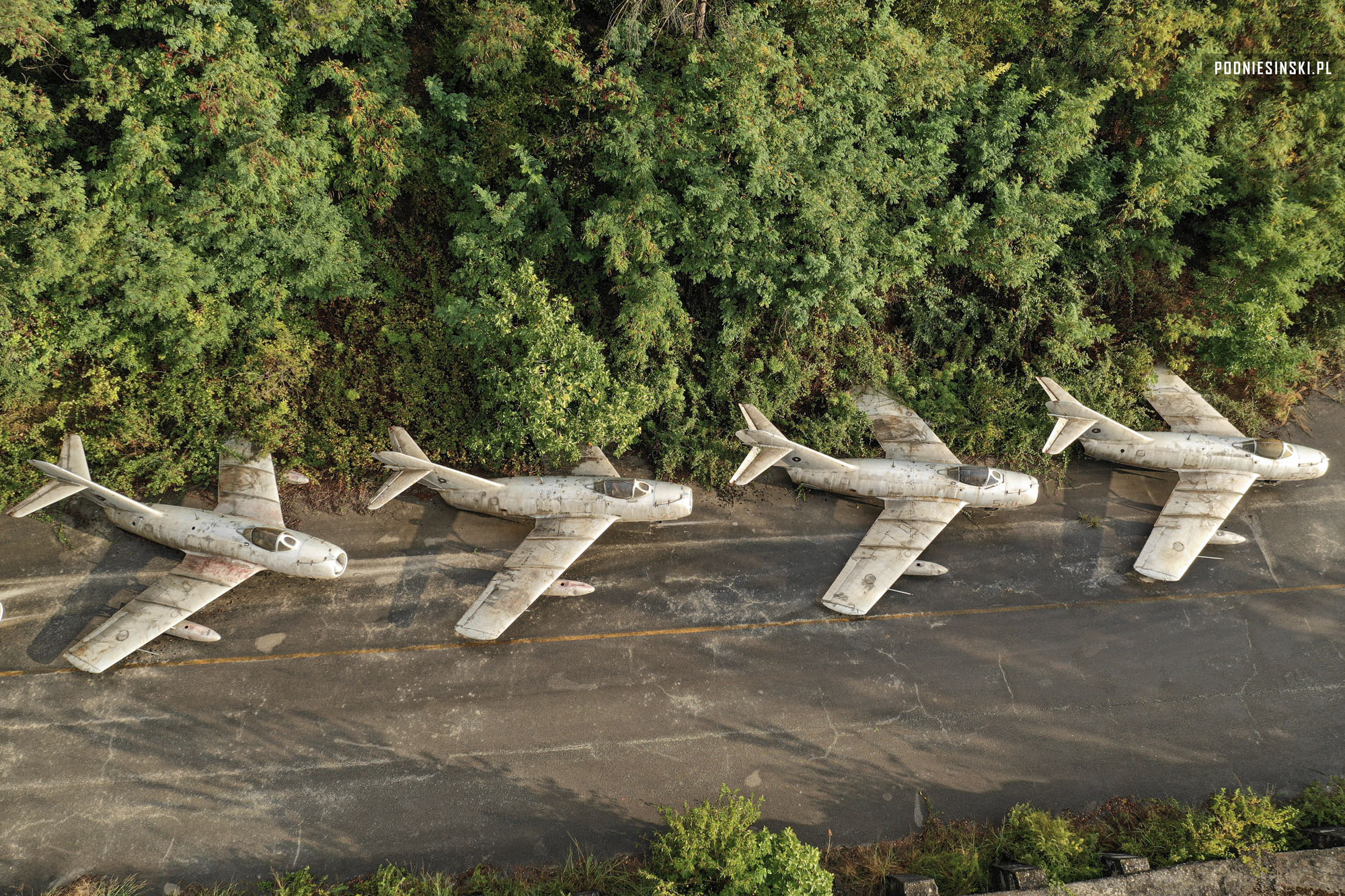 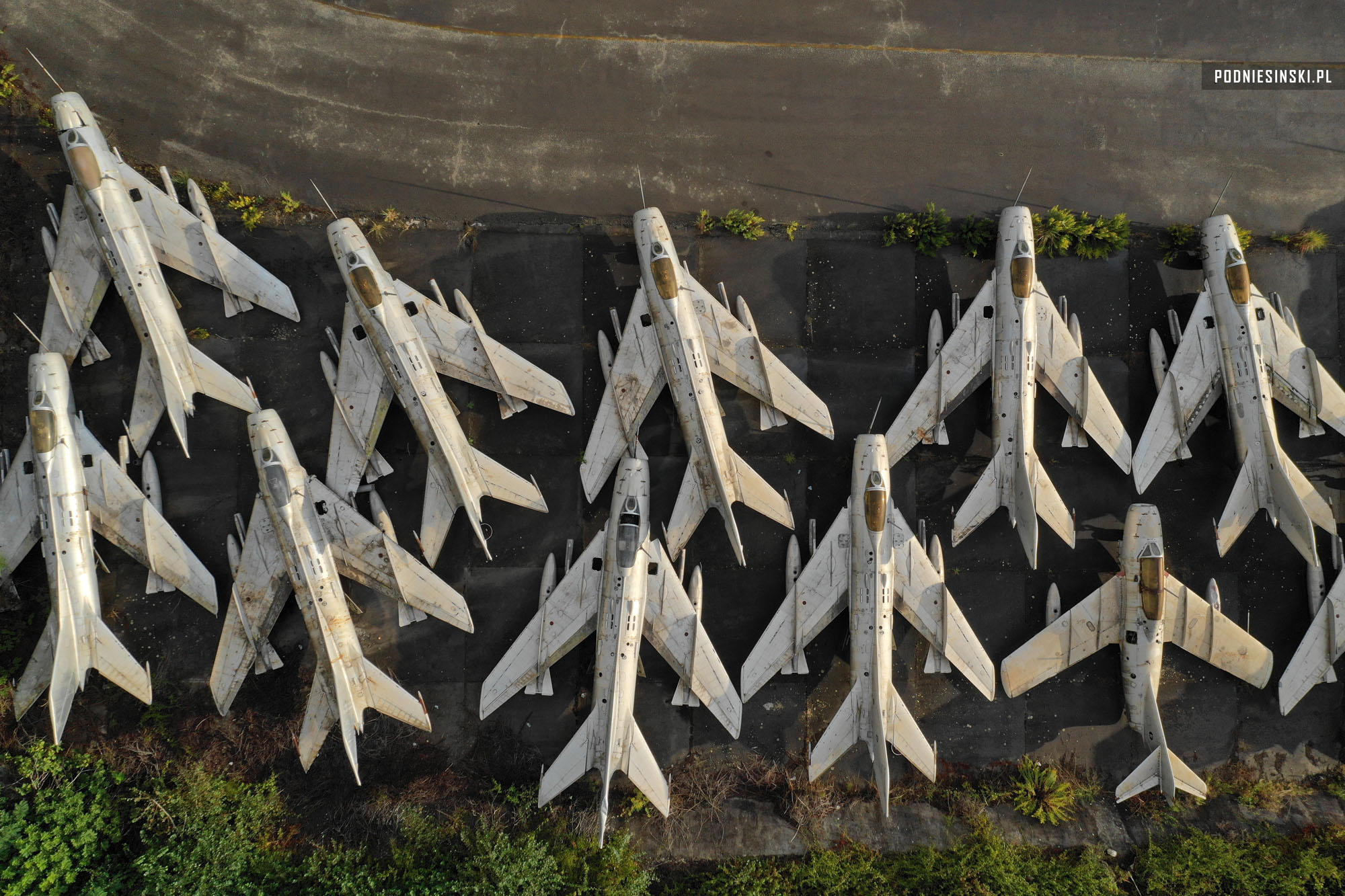 Lined up one behind the other, they look as if they’re waiting for the signal to take off. But that’s only a pretense. When I get closer, I notice the faded hallmarks on the hulls, punctured tires below, and many pieces of missing equipment. However, considering their advanced age, most are in really good condition. Several years ago, there were plans to sell the decommissioned fighters to fund the modernization of the Air Force. Supposedly, many museums and private collectors from around the world came forward to buy these extremely rare machines. However, nothing came out of it, so the jets continue to deteriorate.

As I walk among the fighter jets shimmering in the sunlight, I try to imagine them in action. How they took off with a deafening roar of their engines, leaving clouds of fumes in their wake, or how they flew in perfect combat formation with their pilots performing sharp turns, evasions and other daring stunts. And finally, how, after completing their mission, they proudly circled the airport and gently landed to find shelter inside an underground tunnel.

Today, dead silence reigns over the airport, broken only by birdsong. They are the only ones actively using this Albanian base. 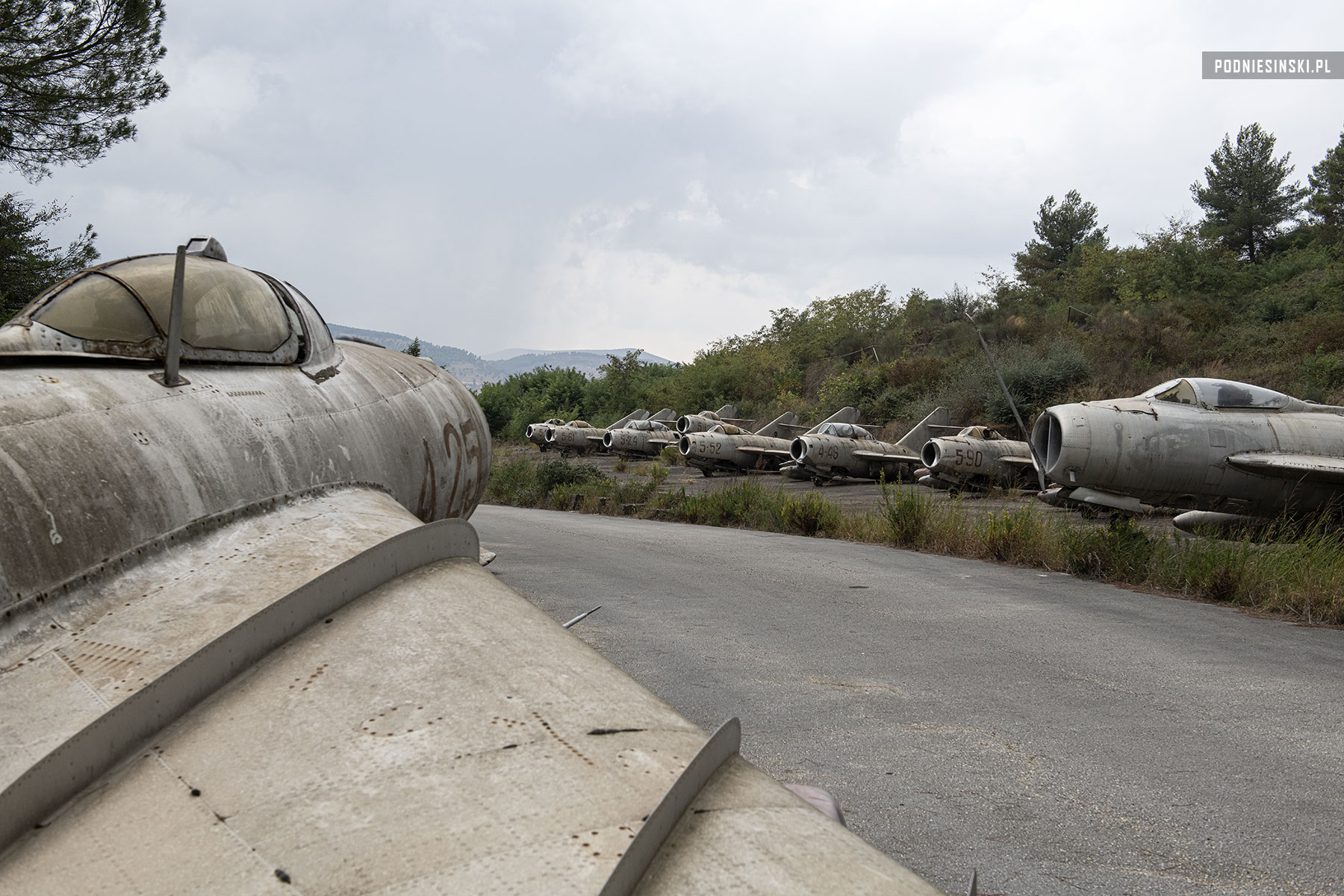 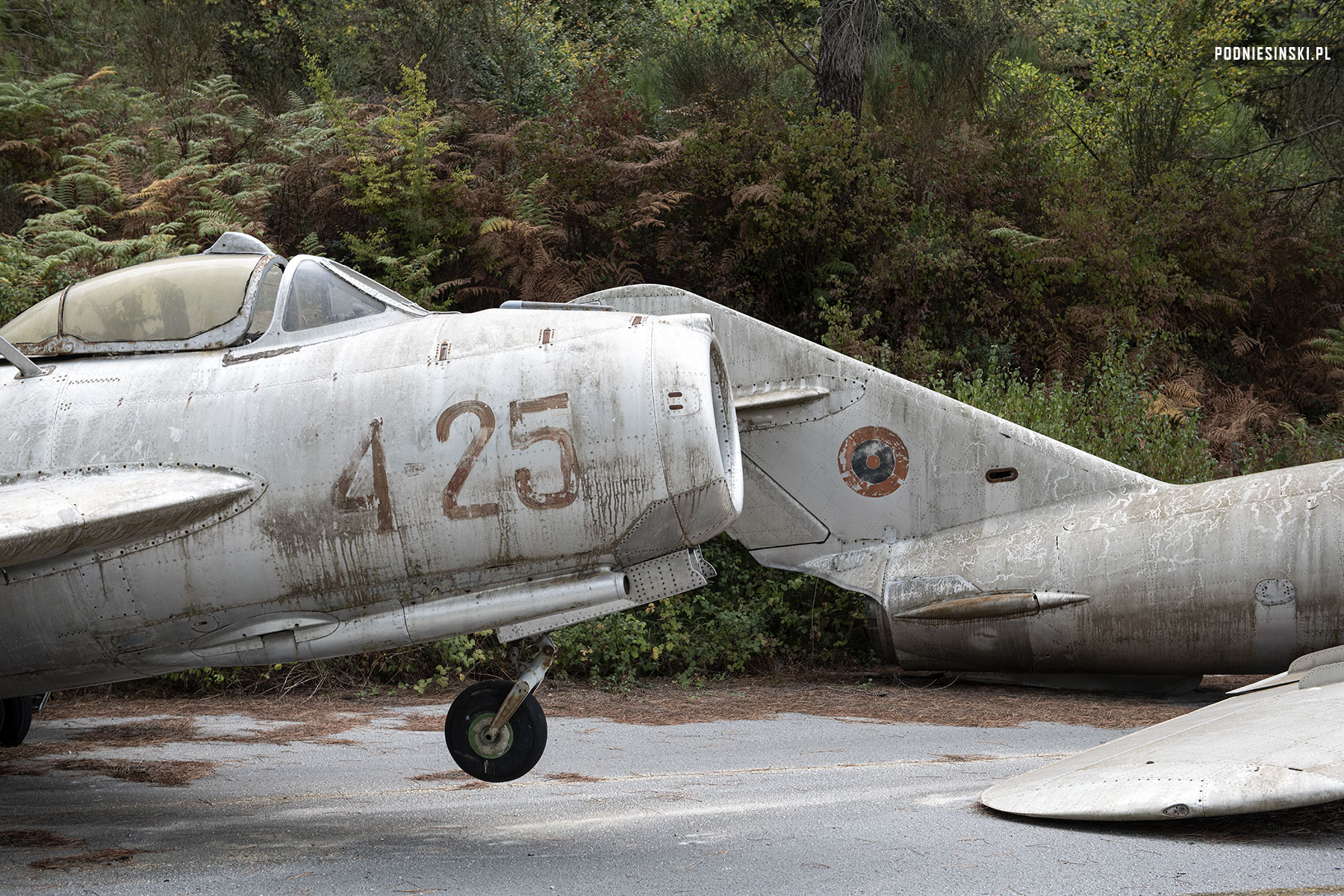 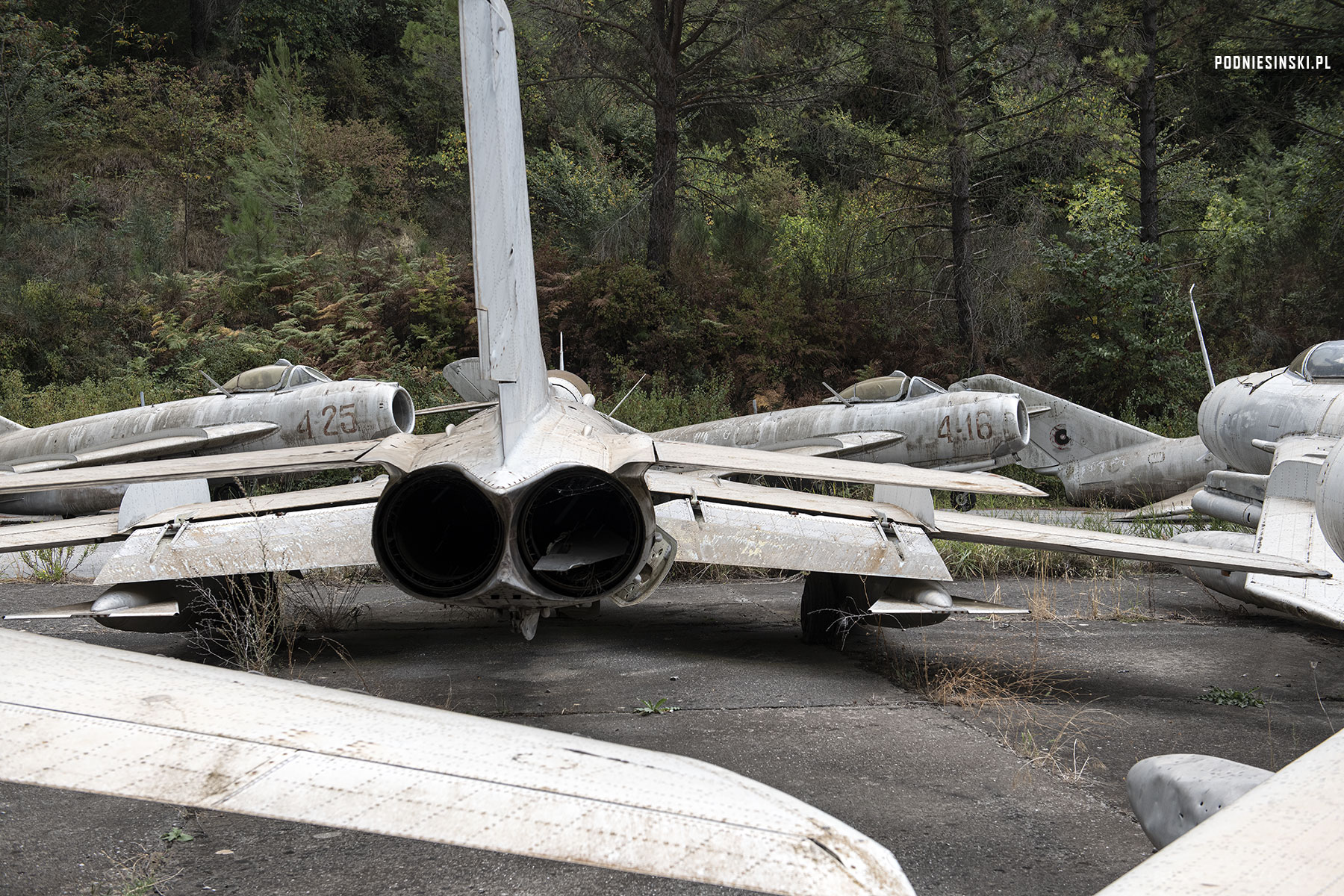 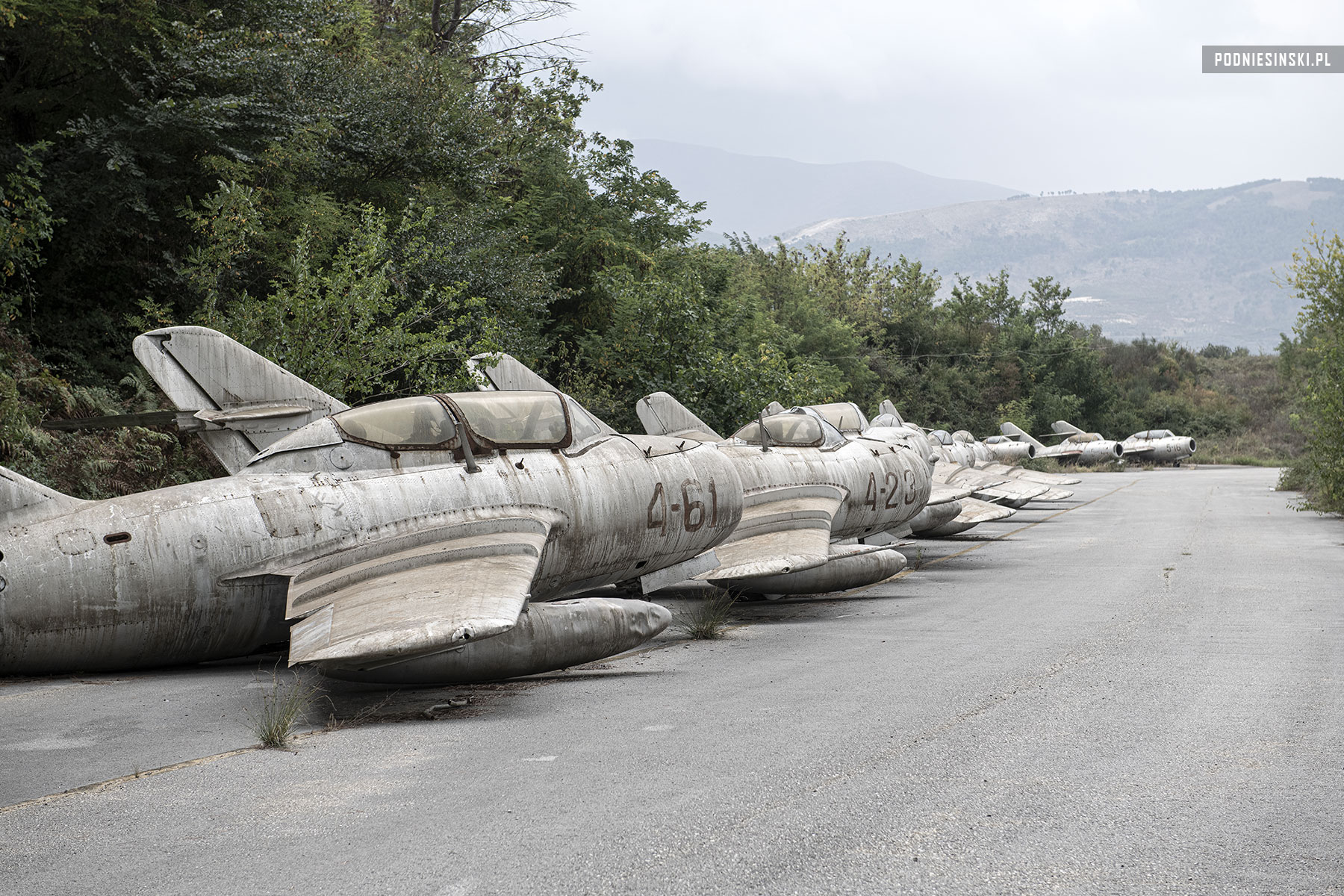 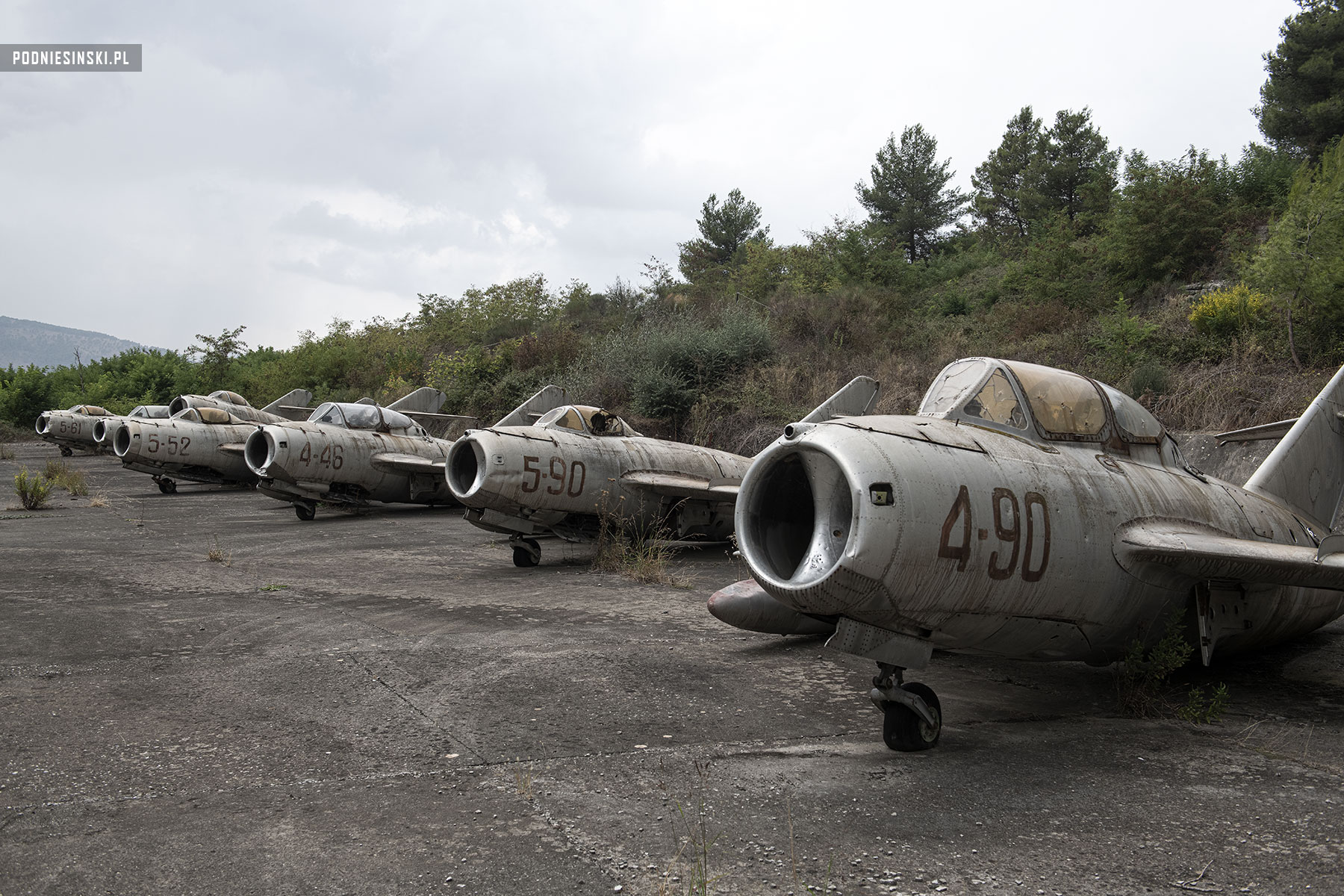 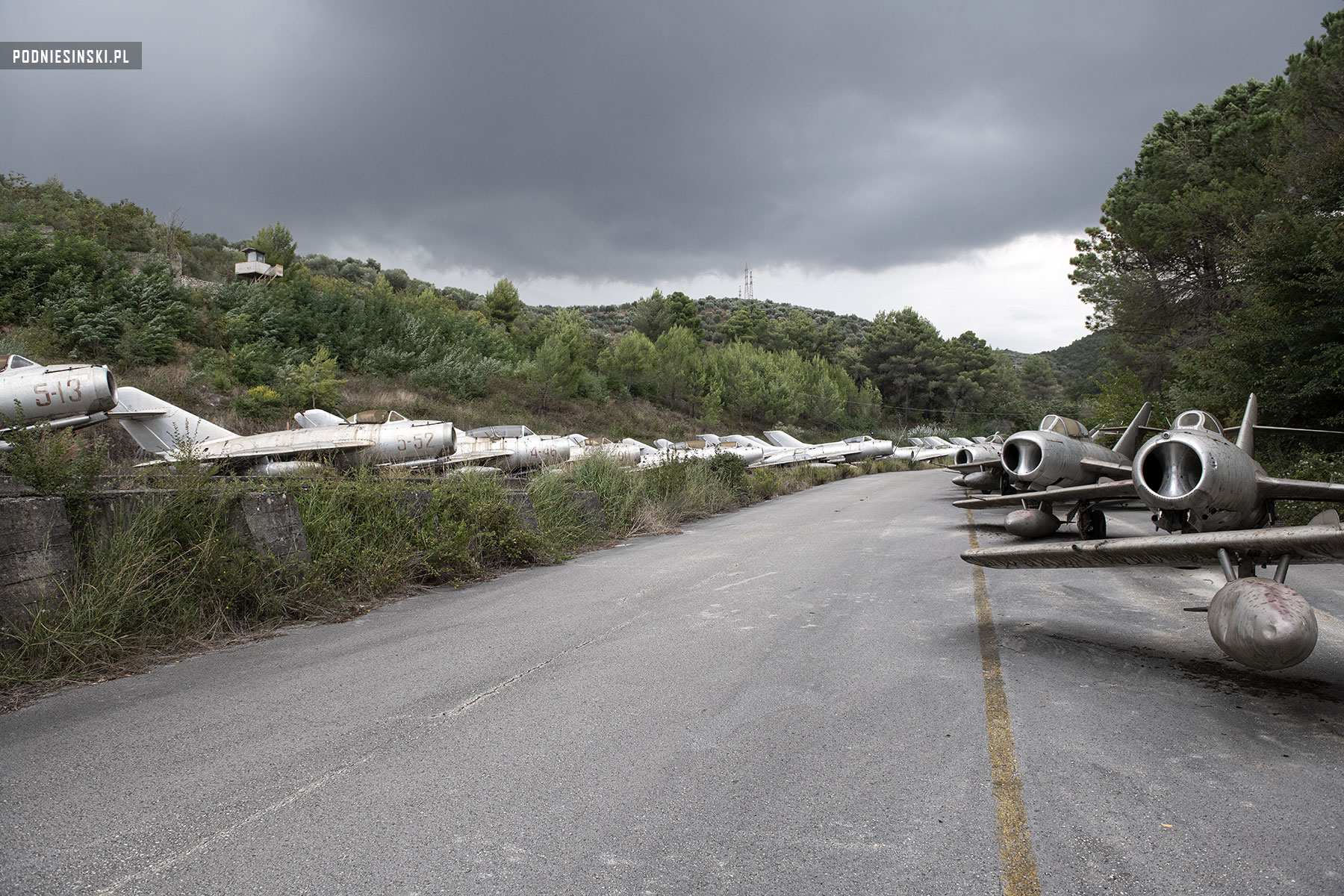 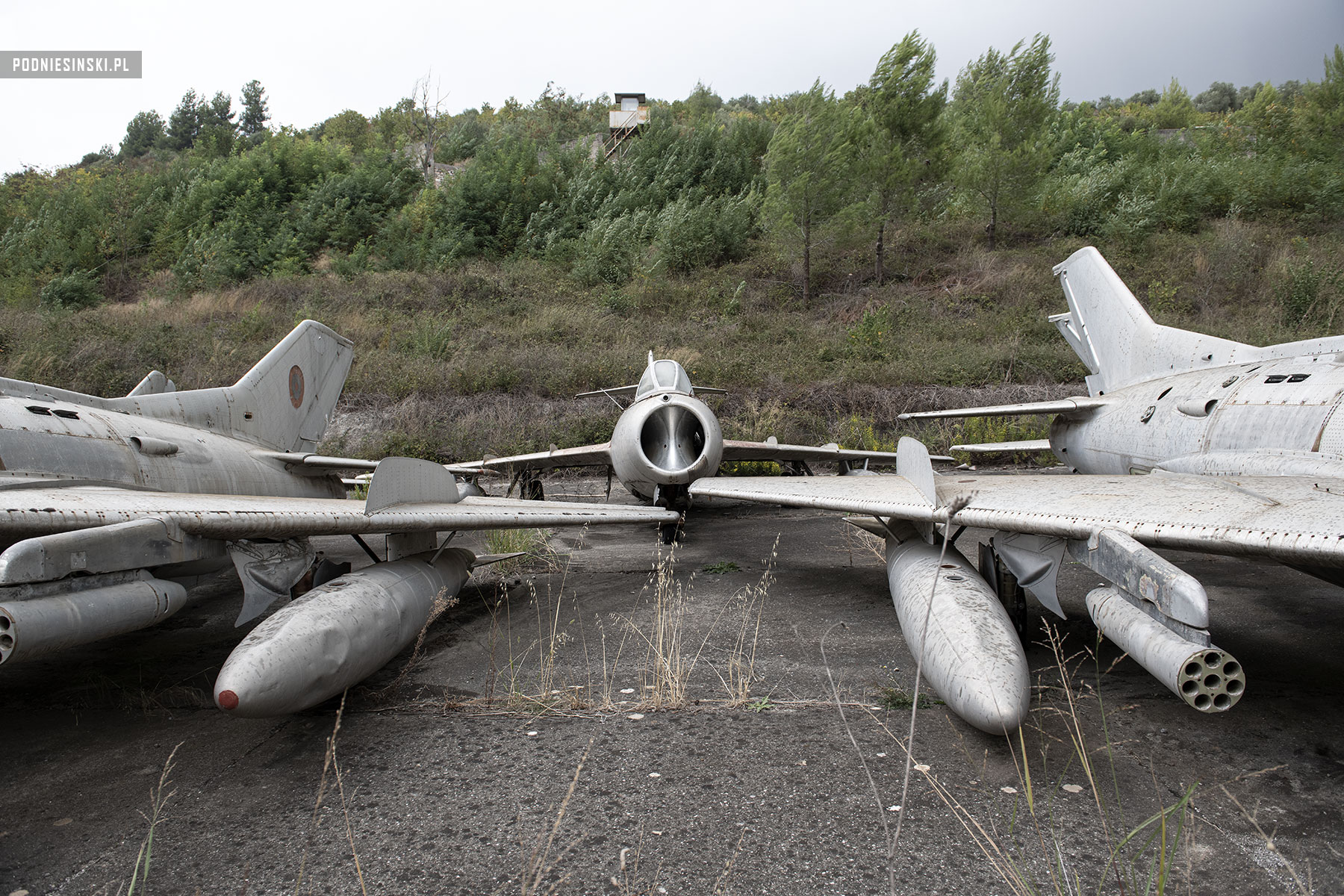 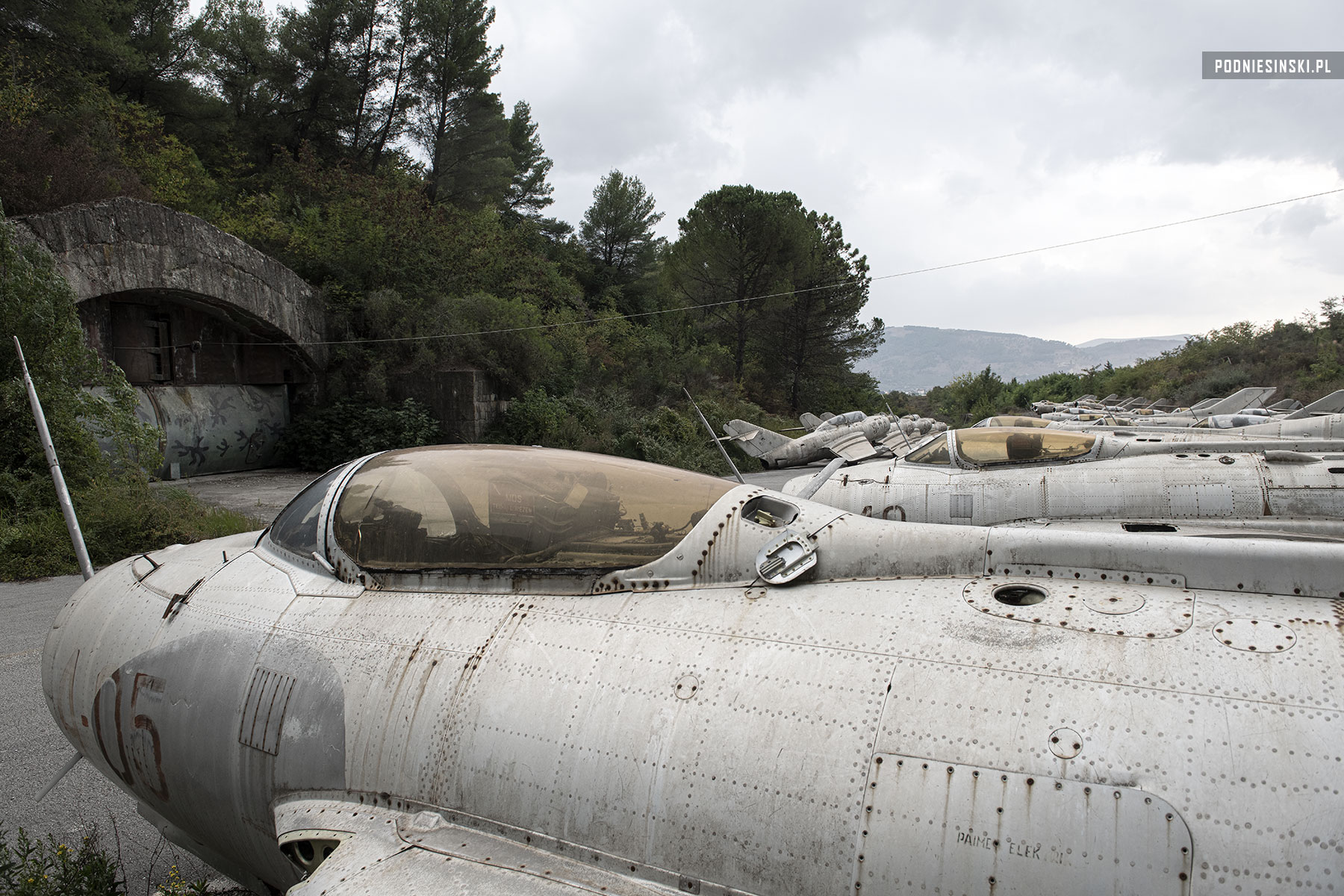 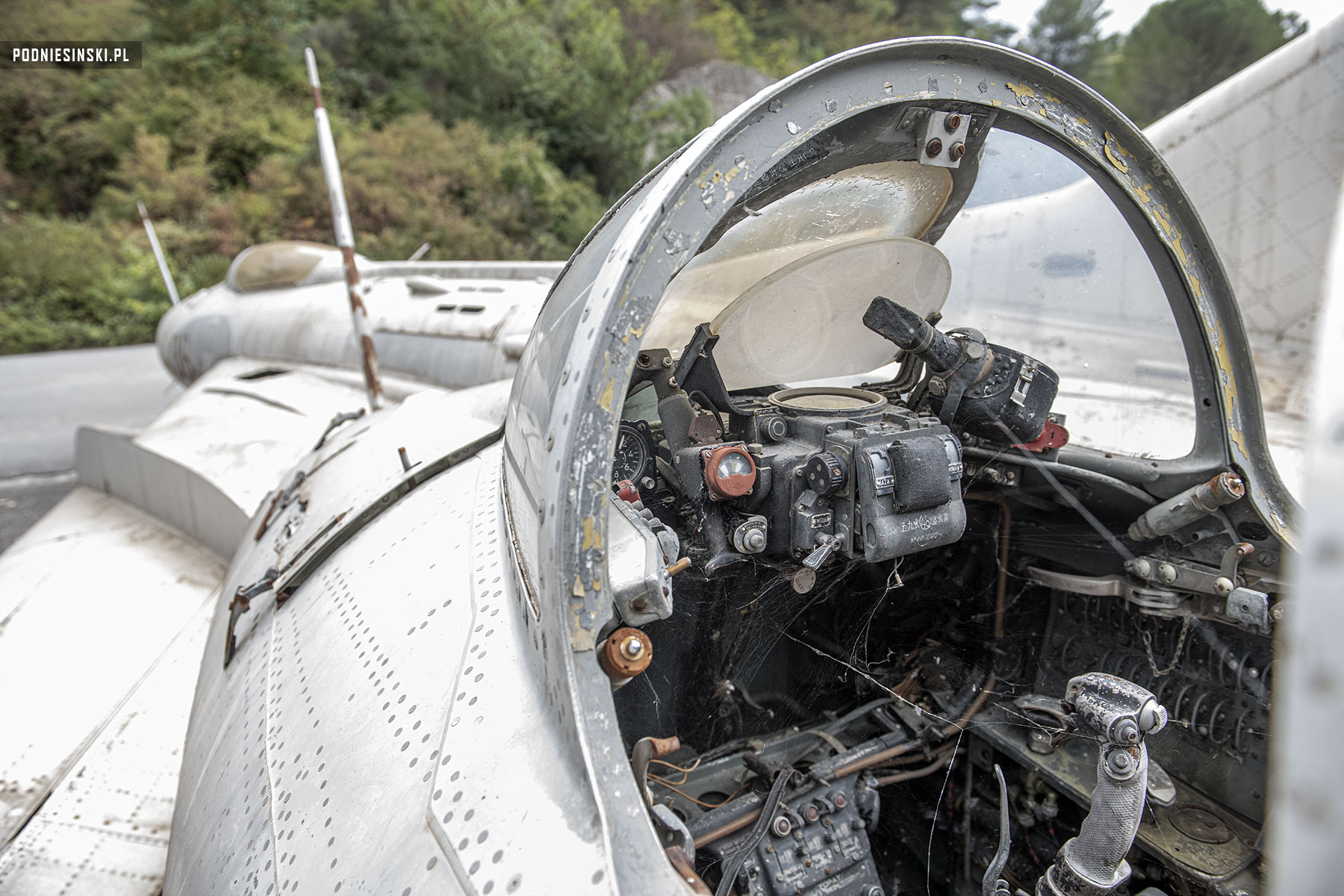 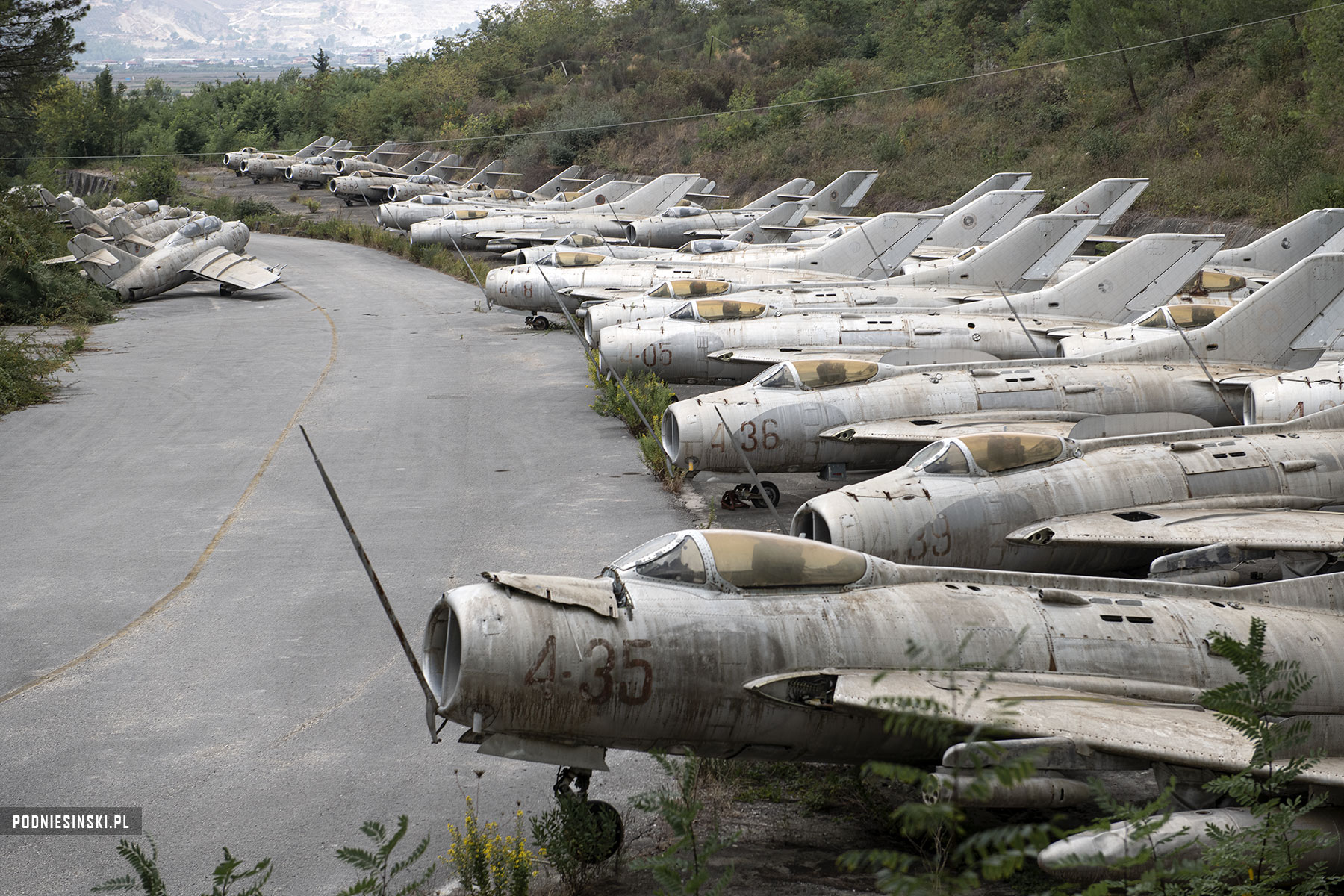 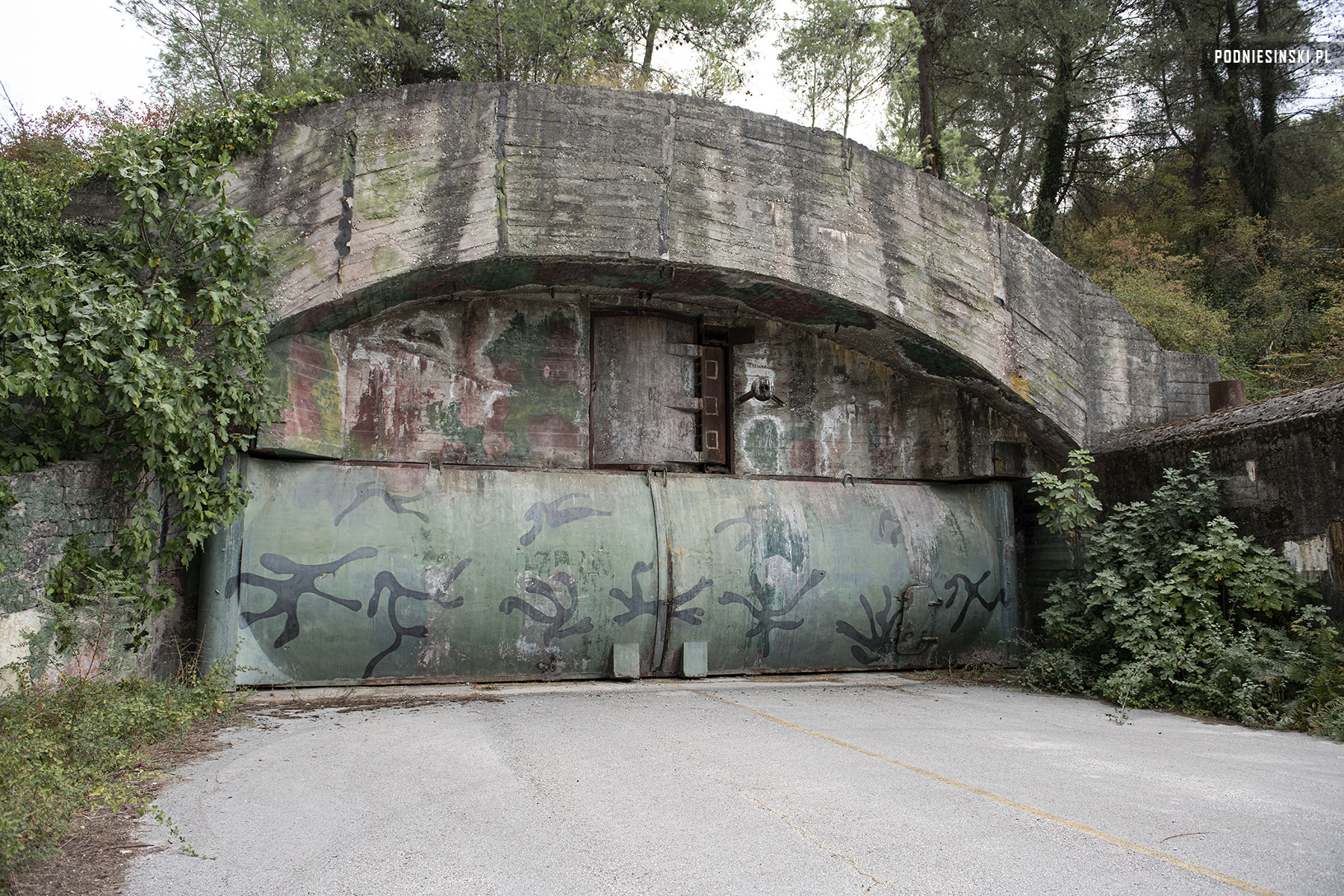 The airbase is about to undergo some big changes. In 2018, NATO announced that it had allocated more than 50 million dollars to modernize the base and bring it up to the standards of the alliance, of which Albania has been a member since 2009. The first construction work is reportedly set to begin this year, so the decommissioned aircraft will soon be removed. This is the last moment to see these pearls of Soviet technological thought, still recalling the Korean war nearly 70 years ago, in the place where they served for so many years.

You may be wondering how we managed to enter the guarded base. Unfortunately, for our own safety and the safety of our potential followers, we can’t reveal too many details. Let me just say that we did not bribe any soldiers, nor did we invoke our NATO membership, nor did we pretend to be potential buyers for any of the jets. 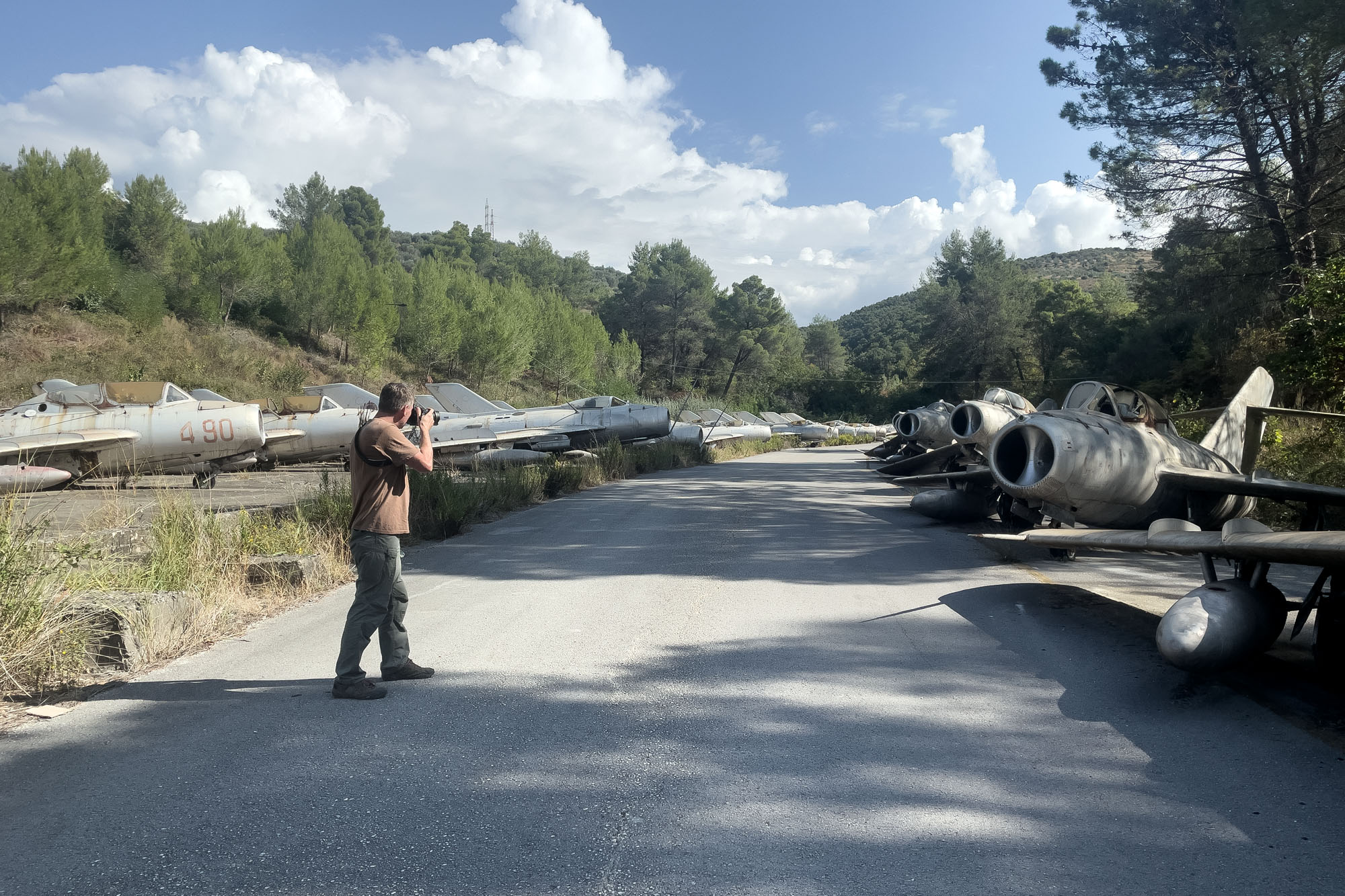