The Cold War is the conventional name for the period of political and military competition between two blocs led by the US and the USSR. This rivalry was mainly ideological and economic, intensified by the conventional and nuclear arms race. Life in those times went on in the shadow of the nuclear umbrella. In schools and workplaces, people were taught how to protect themselves from the effects of weapons of mass destruction, and bomb and anti-nuclear shelters were built beneath them. Most were built in cities that were strategic transportation hubs and military production centers. The largest of these were equipped with generators, communication systems, filtering and ventilation systems, means of protection, medicines, and food and water, and could accommodate several thousand people. They were primarily reserved for employees of government agencies and strategically important gas, oil and nuclear companies to continue working under wartime conditions. Ordinary residents, on the other hand, could take refuge in dual-use buildings such as basements, tunnels, underground parking lots and subway stations. For more than 30 years, the two superpowers held each other in nuclear check, although they ultimately avoided a direct military confrontation. When the Cold War arms race was interrupted by the collapse of the USSR in 1991, the shelters became obsolete. Some became museums or were converted into warehouses, restaurants and gyms. Most, however, have simply been forgotten and still hide relics of that era of global conflict. In Ukraine especially you can hear about the discovery of these forgotten buildings every now and then.

Their existence captured my imagination and encouraged me to look for them.

Old maps, shelter plans, films, and other Russian- or Ukrainian-language documents are extremely helpful for this purpose, allowing me to significantly narrow down the number of potential locations. Relatively new technologies such as Google Maps and Street View also come in handy, as they allow me to conduct the first stage of my search without leaving my home computer. After several weeks of staring at my monitor screen comparing the shapes of hundreds of buildings and the locations of entrances and topographical features such as roads, paths and lakes, I have my first breakthrough. It turns out that the shape of one of the buildings is very similar to the plan for an underground shelter. The distribution of the entrances and other topographical features also coincide. One could be there! A few more weeks of additional research results in the pinpointing of two more potential sites.

The first location turns out to be wrong. I do not find any entrances or ventilation shafts protruding from the ground, which would reveal the existence of underground structures. After a few hours of fruitless searching, I give up. Locating an underground shelter is in reality much more difficult than searching for it on the computer. I have more luck with the second shelter. I manage to confirm its existence, but all the entrances are closed and sealed. Getting inside is impossible though, at least without the right tools and, above all, permits. Not this time. The last shelter should be on the premises of an old, but still operating, plant that produces machinery and equipment for the power, metallurgical, chemical, coal and oil industries. When I approach the main gate, I see an old building that hasn’t been renovated in years and a huge sign with a phone number and the words for rent. It immediately makes me think of Poland, where during the political transformation and economic liberalization many factories were unable to adapt to the new economic conditions and went bankrupt.

I enter without any trouble. The factory, which was built almost a century ago, is long past its glory days. The neglected buildings are haunted by cracked walls, falling plaster and broken windows. Only one of the several huge, fired-brick halls is still in operation. Several smaller ones have been sold or leased to private companies, which have converted them into workshops, warehouses and wholesale stores. Other buildings are being demolished or renovated. Around them lie piles of rubble, old structural elements, and equipment nobody needs. The complex teems with people: factory workers, construction companies, and customers of nearby businesses, so no one pays me any attention. First, I meticulously check the area around all the buildings and look for any ventilation chimneys sticking out of the ground or other characteristic elements that would indicate the existence of an underground shelter. By late afternoon, I’ve found nothing interesting and decide to give up. Enough for today.

The next day, I plan to have a look in the buildings. After several hours of further searching, I finally succeed: I find the entrance to a bunker in one of the basements. It’s protected by a massive, airtight door, which was to prevent radiation and war gases from entering. As soon as I open the door, I’m hit by a blast of damp, musty air. The very first room leaves no doubt as to where I am. On the wall hangs a huge, old board with a depiction of a menacing-looking atomic mushroom cloud and tables allowing one to estimate the effect of radiation and shockwaves on a building’s operational stability. On the other side of the room, I notice several wooden crates. I open one. In it are dozens of new GP-5 gas masks, still wrapped in gray paper. Excited by the find, I gently take one out to get a better look at it. Often in such moments I act like a child who, upon seeing a new toy, absolutely must touch it. The masks look good, although their shelf life has long passed so they’re no longer usable. In several other rooms, I find evenly spaced benches and chairs, as well as boards with information on how to protect yourself from a nuclear explosion, how to render first aid, and how to properly put on protective clothing. These were probably training rooms, where civil defense lessons were organized in peacetime. Behind them, in the central part of the shelter, I come across the head of the facility’s room. An old, yellowed computer catches my attention. Instinctively, I press the power button, like I was hoping that in a moment I’d hear the hum of a fan and unintelligible messages would appear on the screen. It would be interesting to find out if after all these years the information stored on the hard drive could still be retrieved. 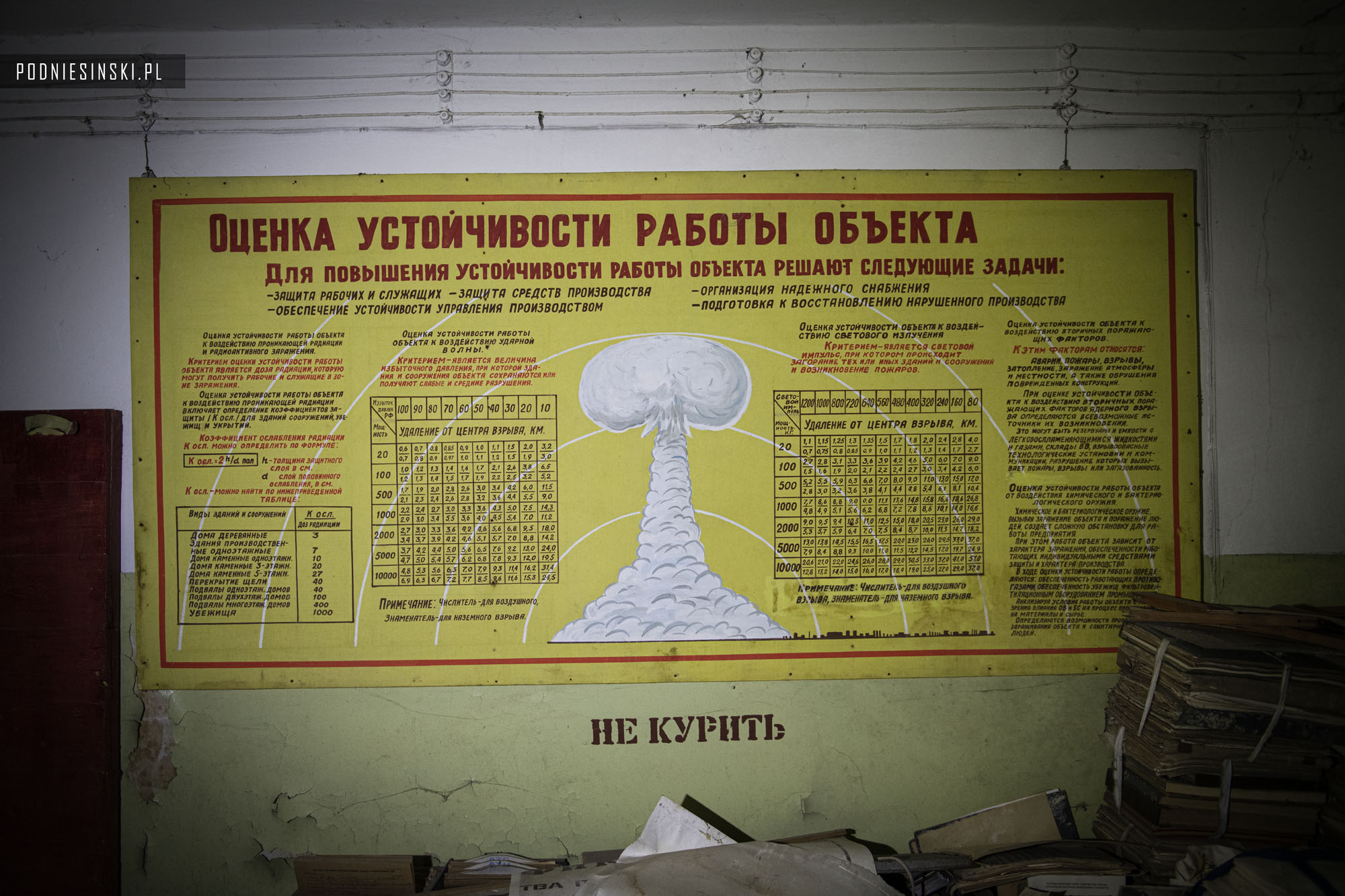 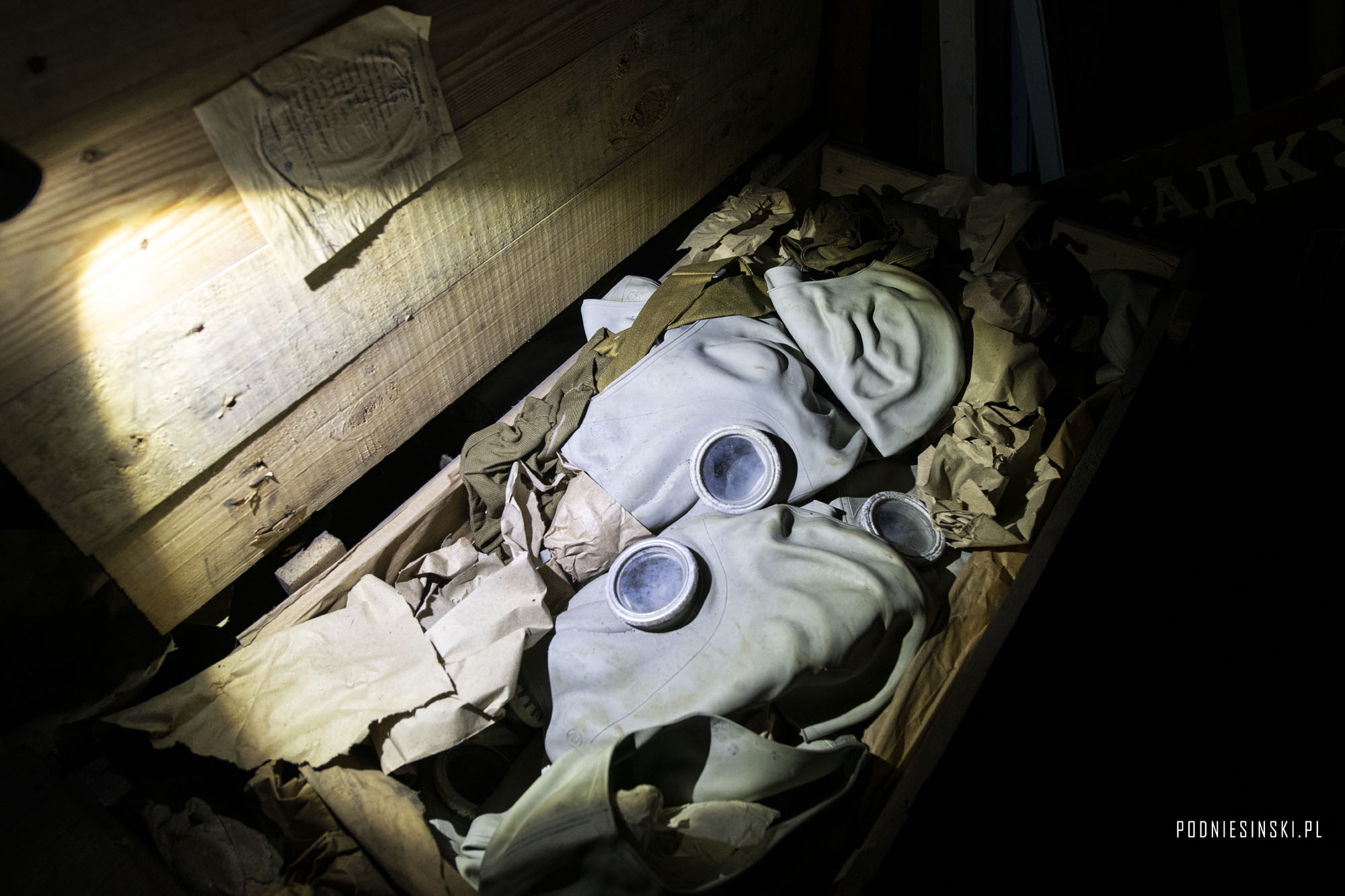 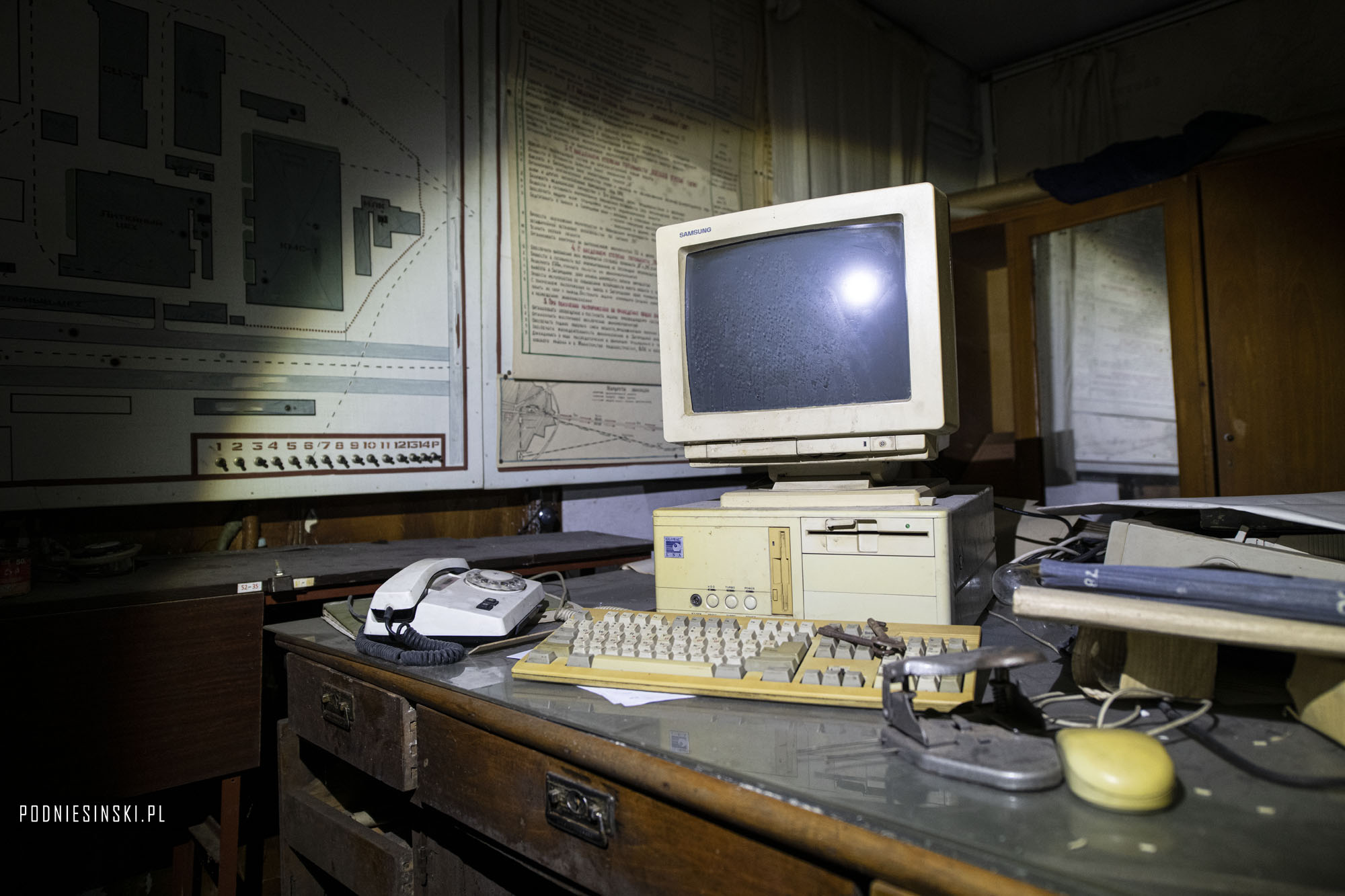 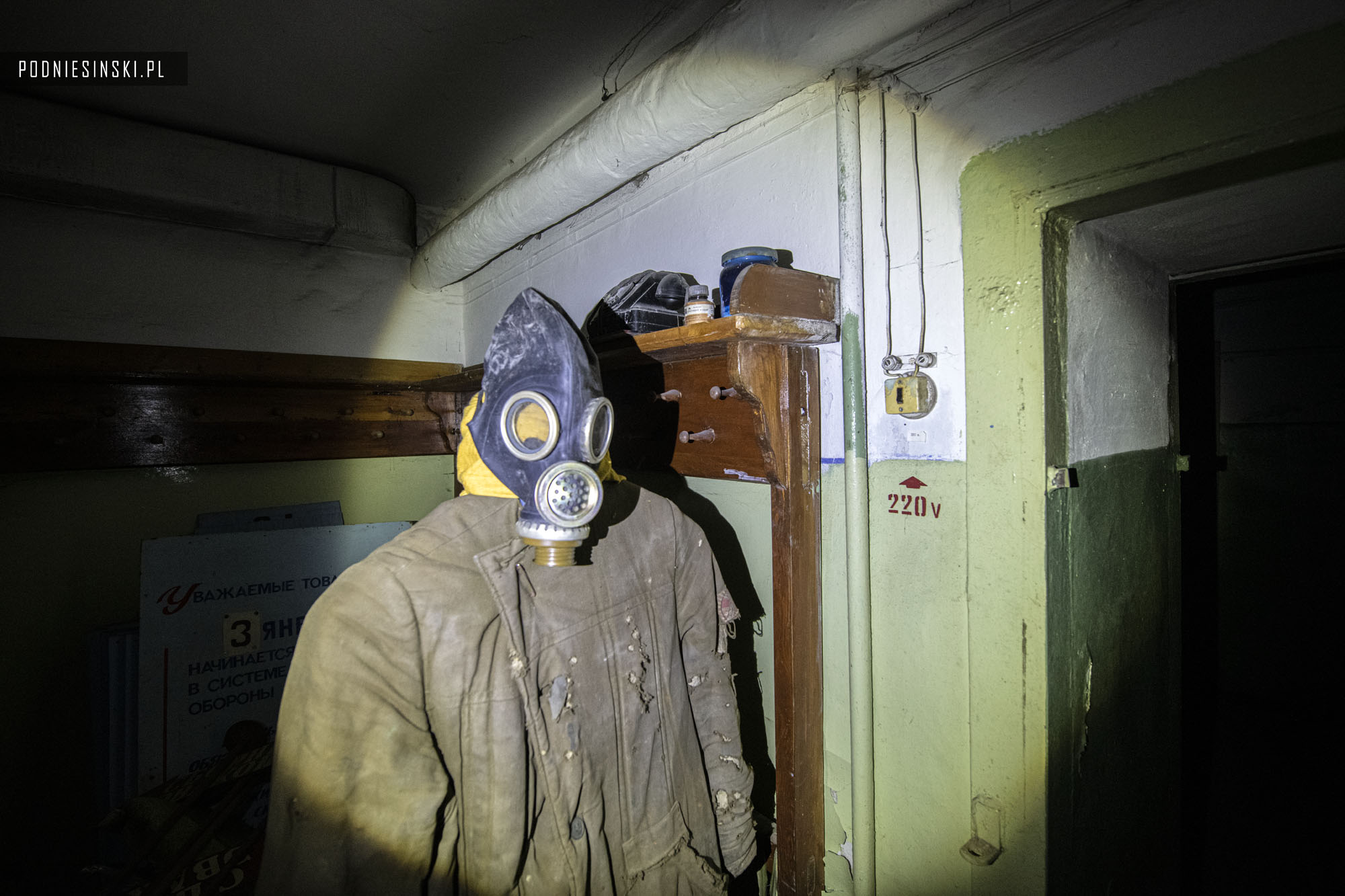 In the next room are metal cabinets with various telecommunications equipment. Prominent among them is an old telephone switchboard with a round dial and dozens of holes, cables and switches used to manually connect calls. But the most interesting things await me in two storerooms located on the side of the complex. In the first, I find hundreds of books, brochures and posters. In the second, there are DP-5 military dosimeters, which were popular at the time. Most of them are packed in leather boxes and then, along with probes and other equipment, in their original wooden boxes. These devices are capable of measuring very high levels of radiation, up to 200 R/h, which can be experienced during a nuclear war or radiation accident, so it’s not surprising that they were commonly used during the Chernobyl cleanup. But that’s not all. Right next to me on the shelves are a dozen more brand-new DP-24 and DP-22 dosimeter kits, each plastic box contains 5 or 50 personal dosimeters. I can’t believe that after all these years they are still here, and in excellent condition. A few of them are lying unwrapped on the floor, a sign that someone must have been here before me. 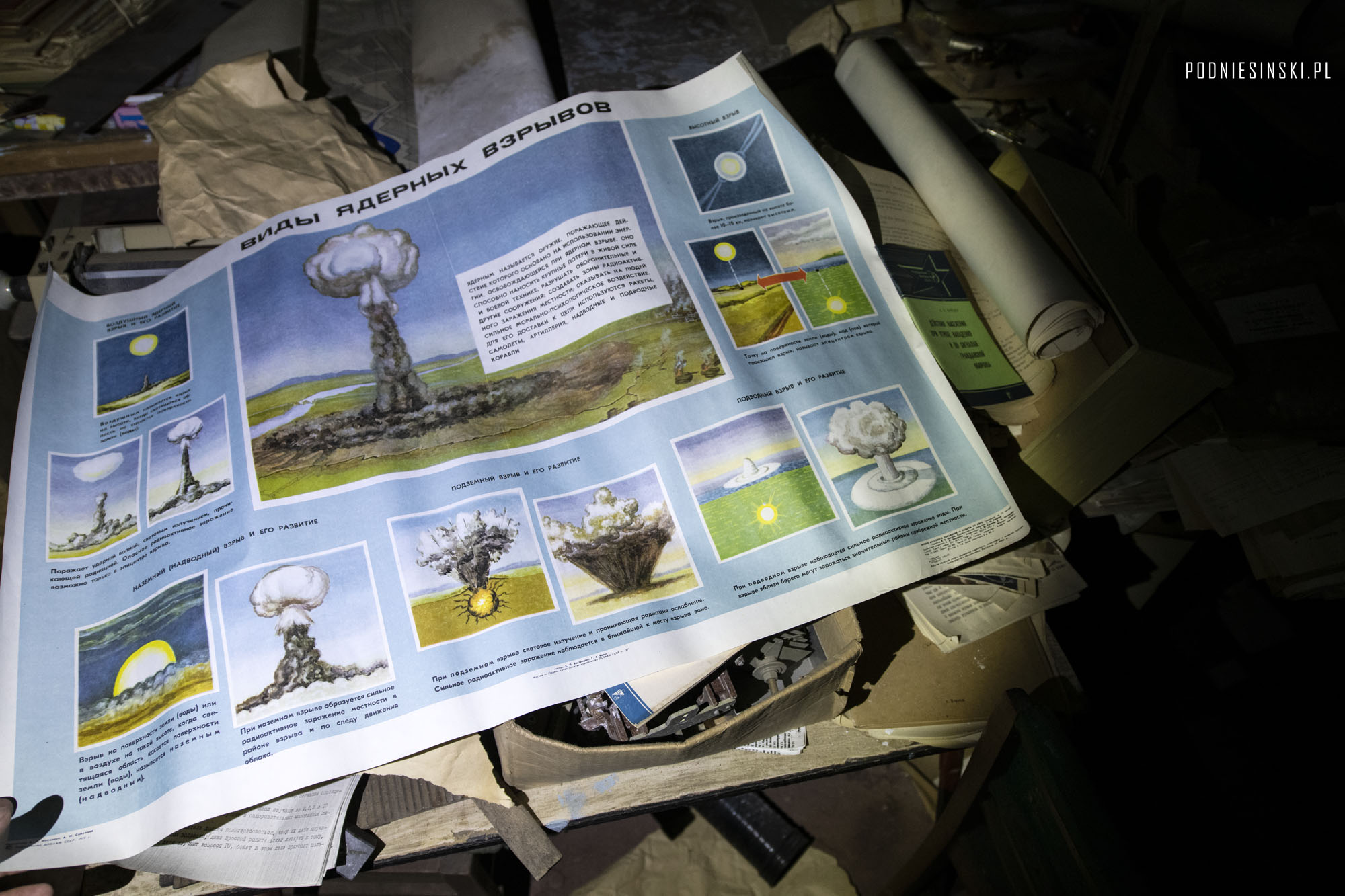 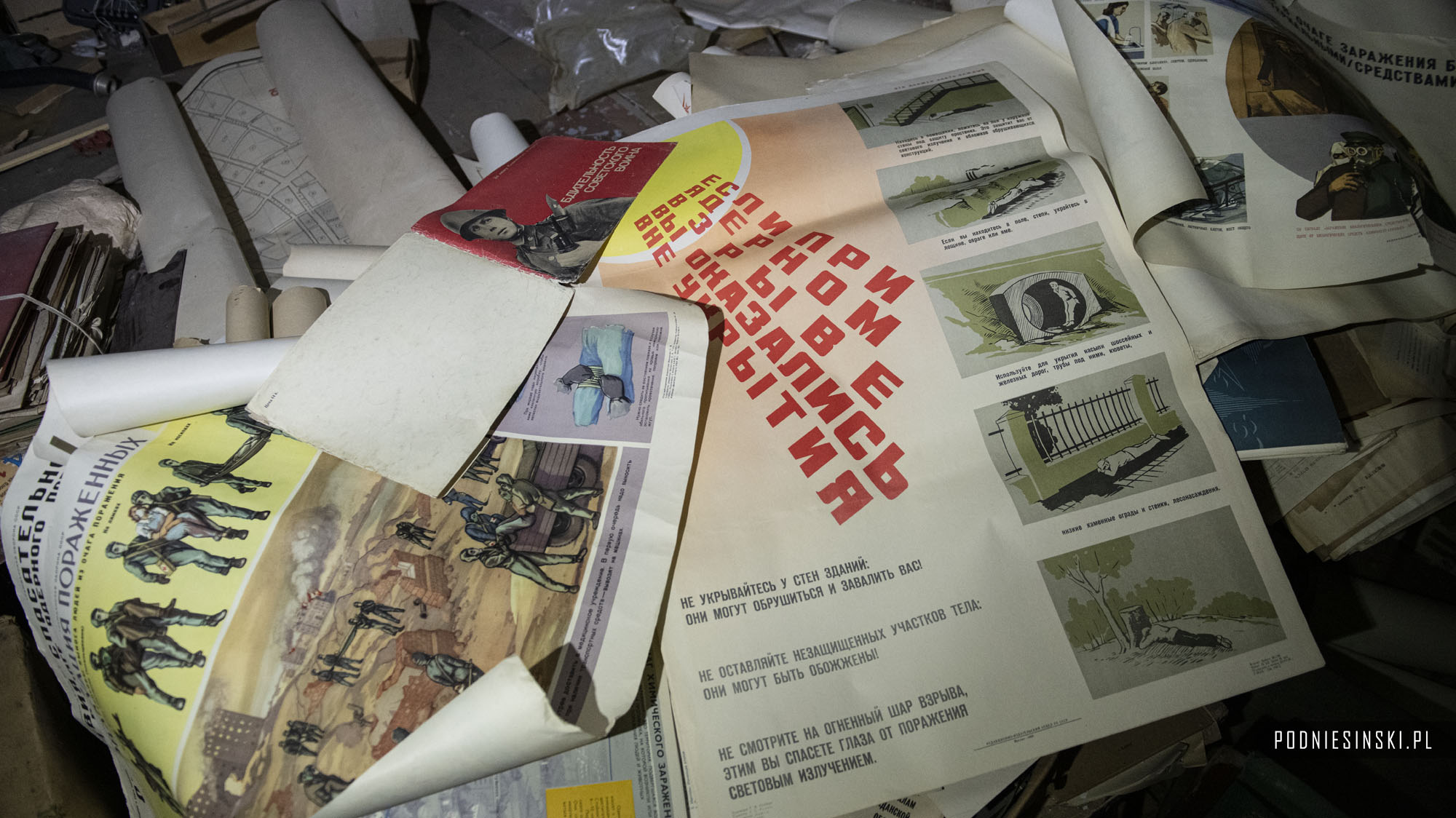 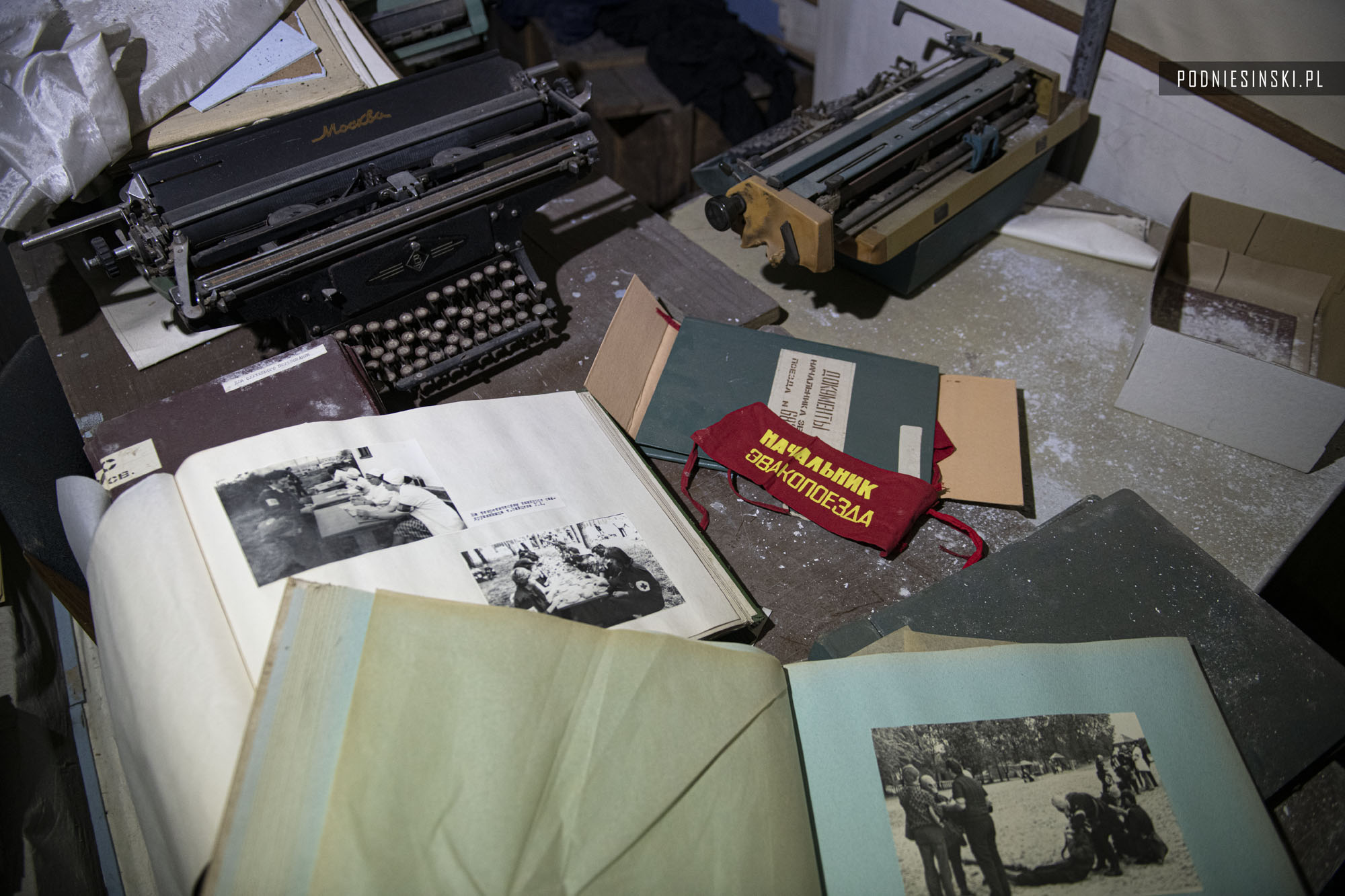 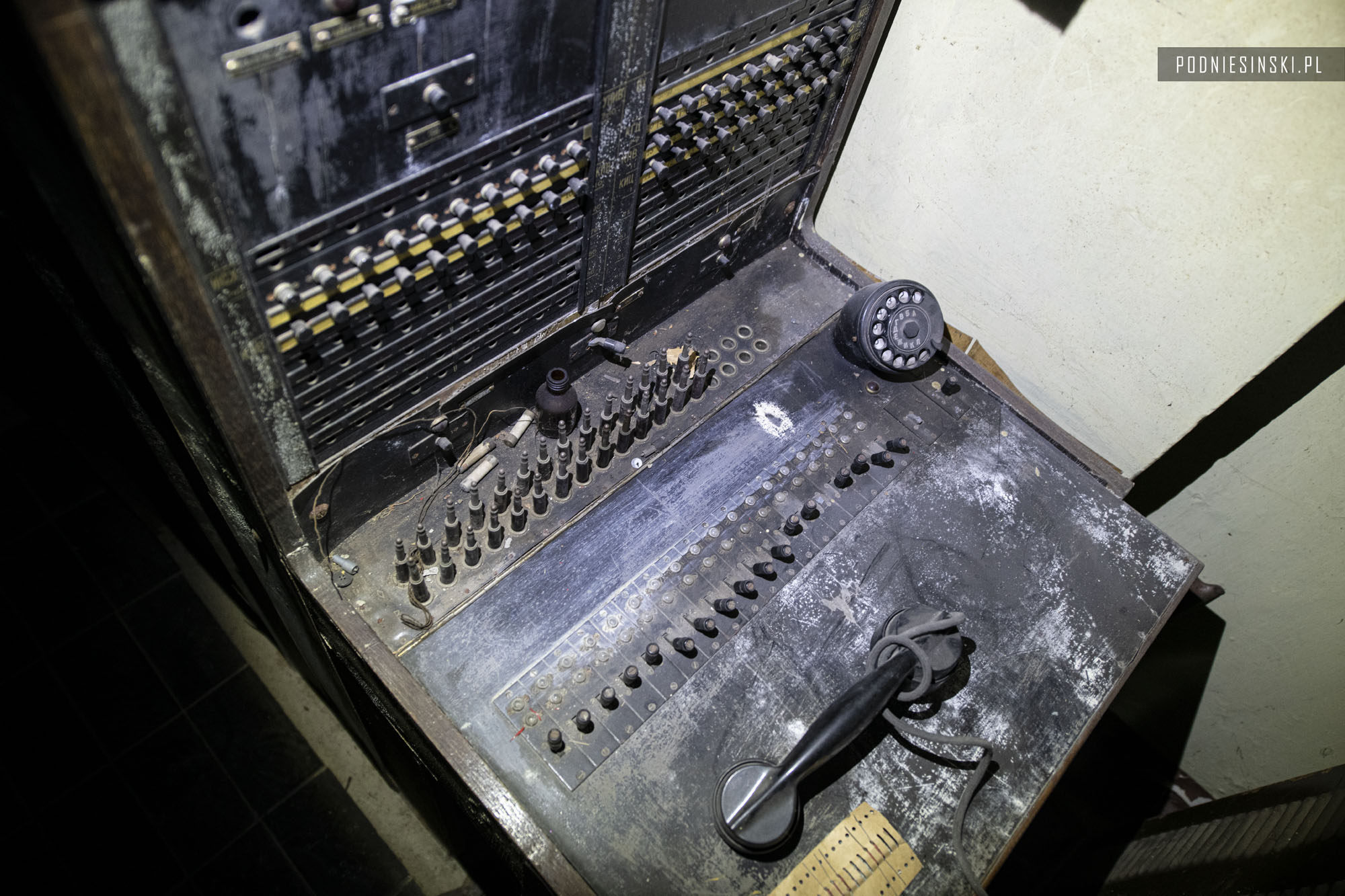 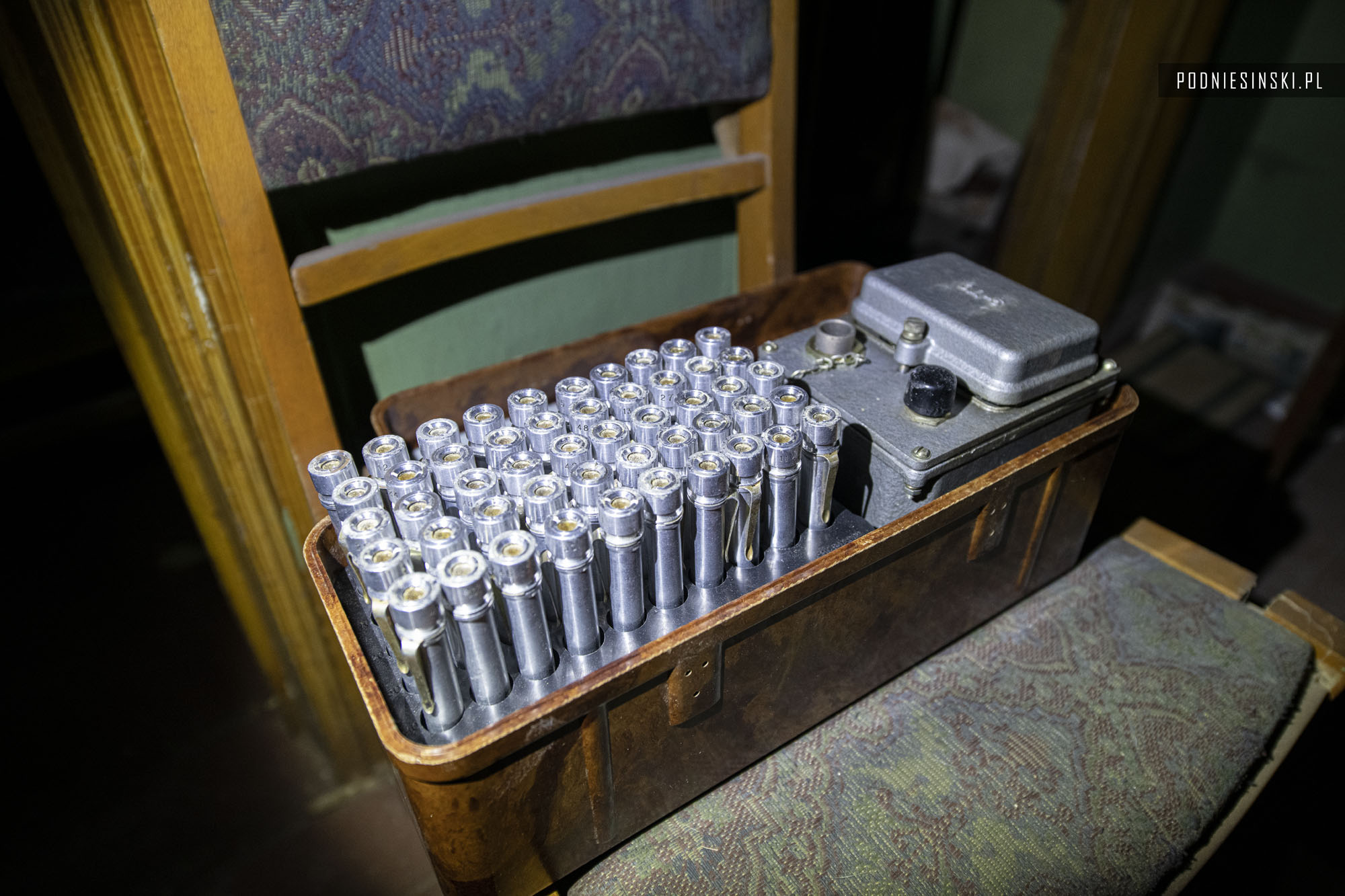 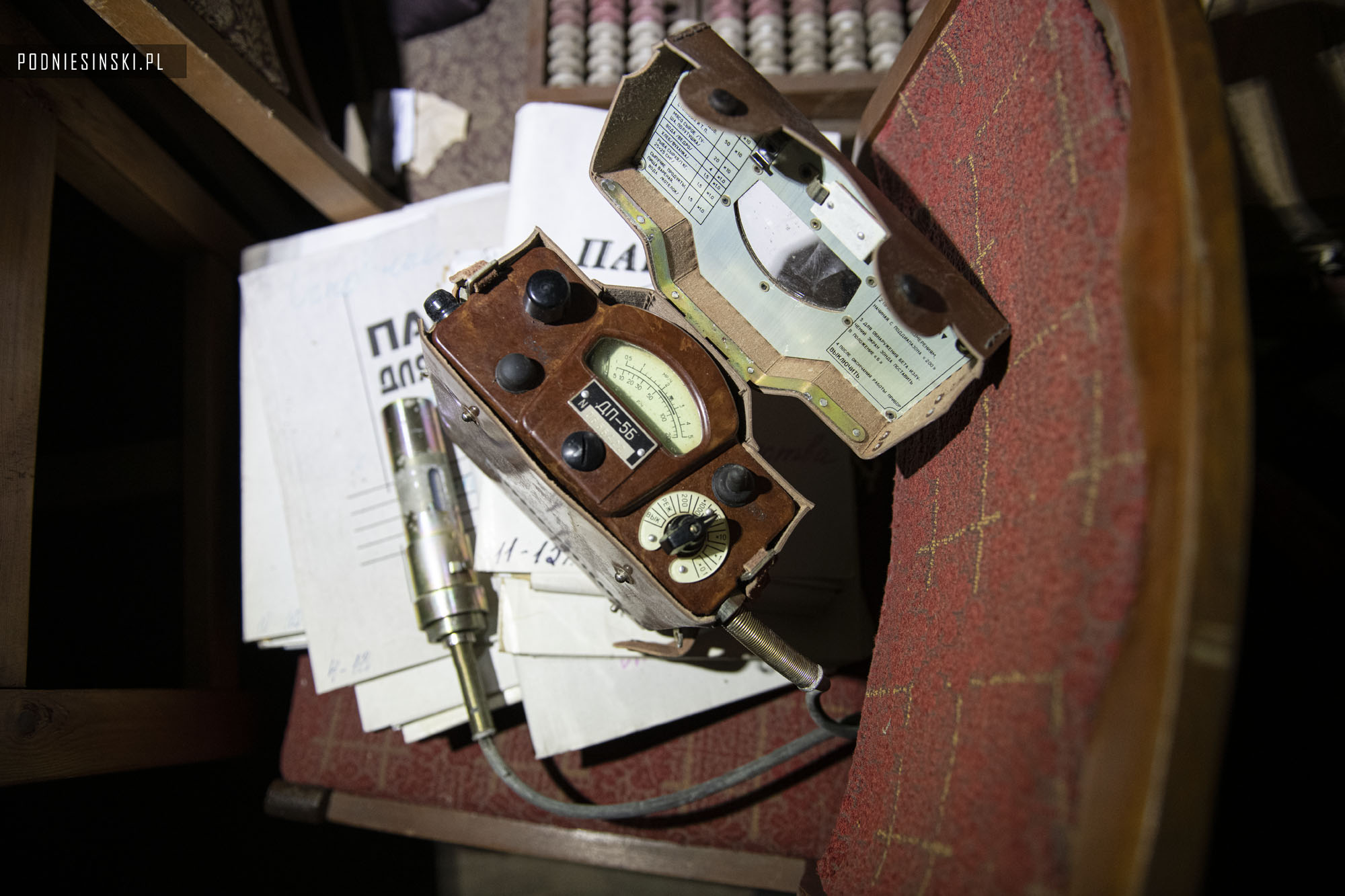 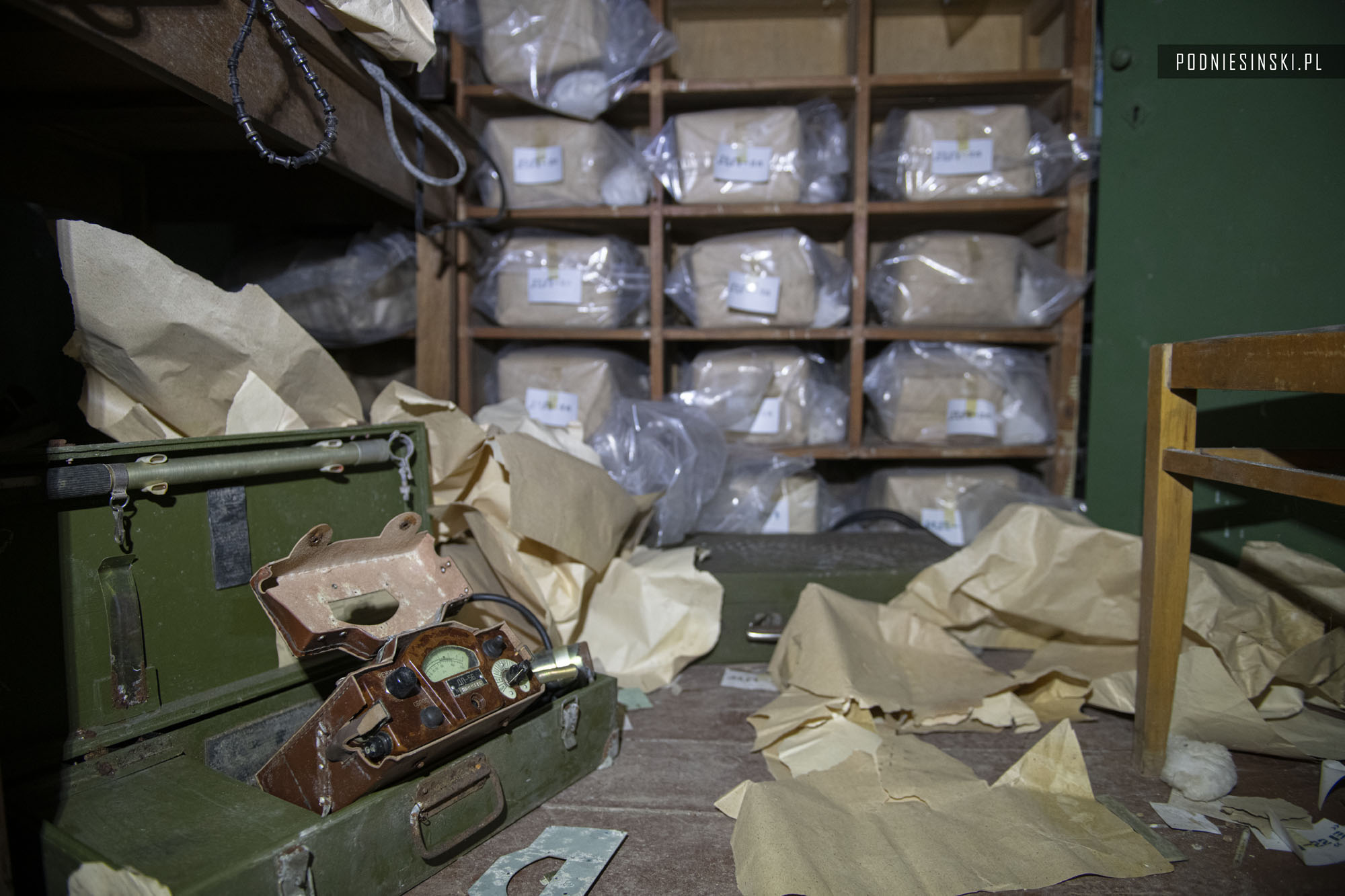 At the very end of the shelter, I find two small rooms. In the first one I find the accumulators that provided power in the shelter. In the second is the filtering and ventilation system, which was supposed to provide protection against chemical, biological and radioactive substances penetrating the interior. I’m curious about the metal crank attached to the fan, which could be used to set the entire system into motion manually in the event of a power failure. Turning it, however, has no effect. Heading slowly towards the exit, I come across another storeroom full of personal protective equipment: masks, stretchers, slings and other items useful in an emergency. I turn my attention to the wooden cabinets standing in a corner with their drawers ajar. They contain hundreds of small, plastic vials of various pills. Depending on their color, the vials contain anti-radiation, anti-bacterial or analgesic drugs that were standard equipment in individual first aid kits used during the war. Among them are even prefilled syringes of promedol, a powerful opioid painkiller, and potassium iodide tablets, which protect the thyroid gland from absorbing the radioactive iodine isotope. 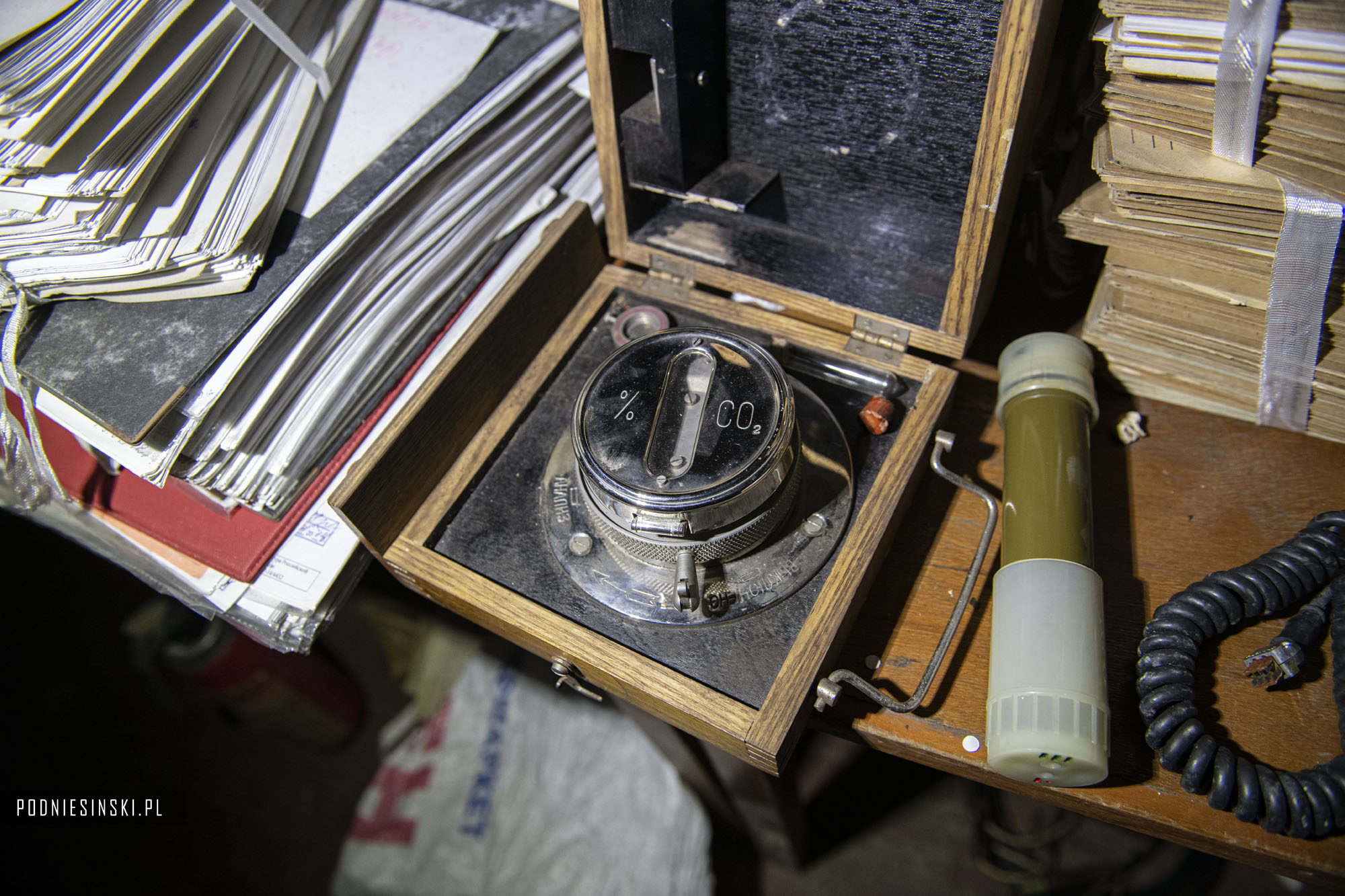 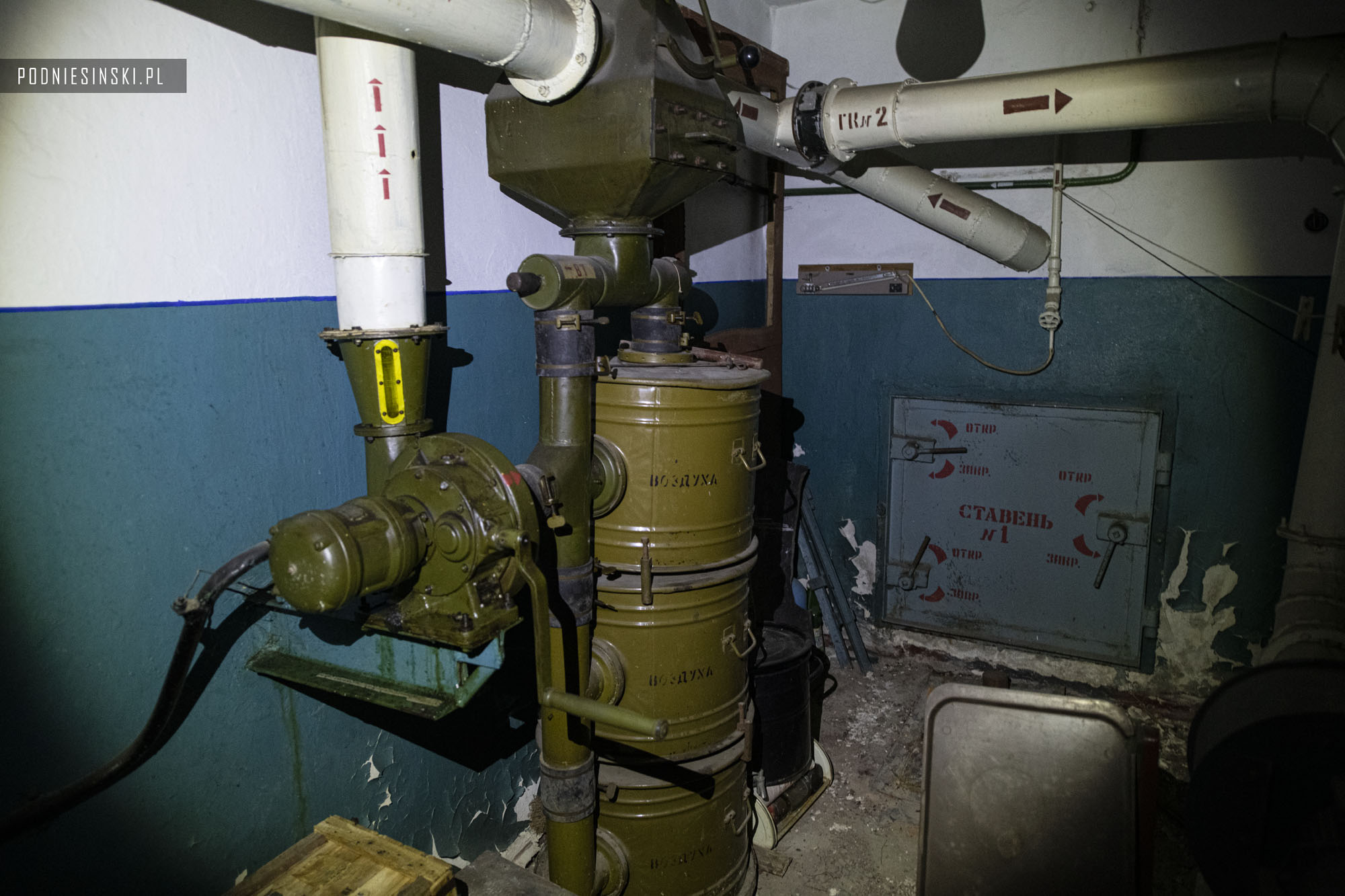 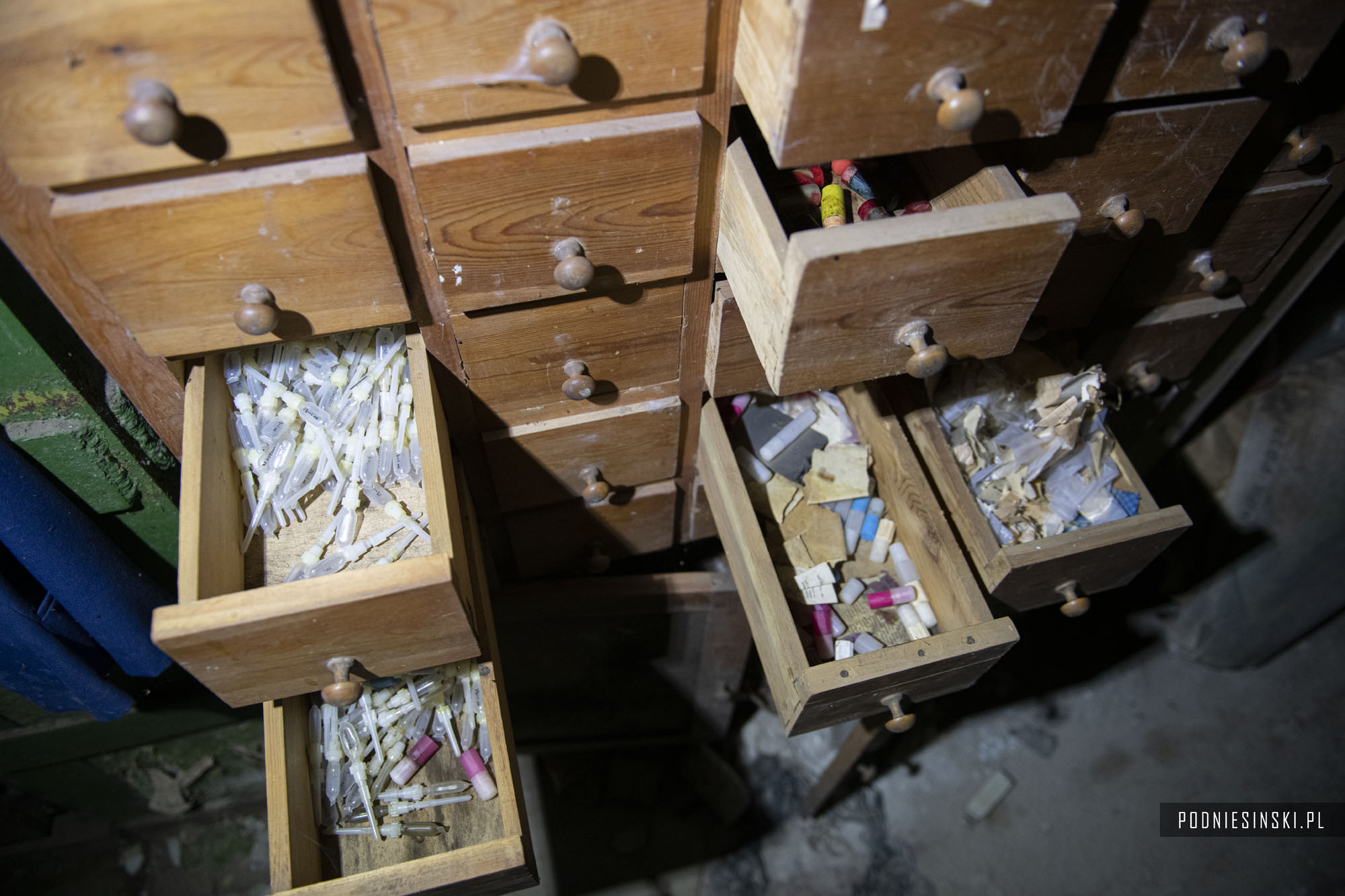 As I leave the shelter, I find once again that I really enjoy exploring such places and learning about the history behind them. My imagination takes me back to those times and allows me to feel the emotions of those seeking refuge from mortal danger. No history lesson, book or movie would ever allow me to be so close to those events.

Until recently, no one thought that shelters would ever be needed again. However, the actions of Russian troops on the border with Ukraine and the annexation of Crimea have again aroused the fears of residents and made them think about their potential use in the event of full-scale Russian aggression. Who knows, maybe this shelter will soon be transformed…

Short video from the shelter